The Riga Conference 2018 brought together politics and defense experts 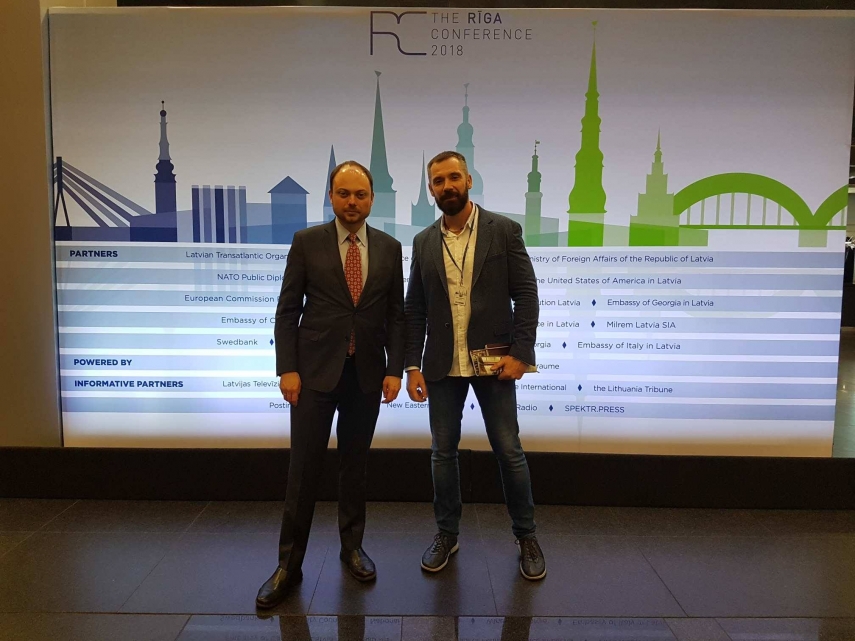 The Baltic Times editor-in-chief Linas Jegelevicius with Vladimir Kara-Murza, vice-chairman of Open Russia and one of the Russian opposition leaders

RIGA - One of the most distinguished security and foreign policy forums in the Baltic Sea region – The Rīga Conference 2018, held at the National Library of Latvia,  brought together heads of states, experts, diplomats, academics and media representatives along with some 700 experts from all over the world.

The conference commenced on Friday, September 28, with the introduction of President of the Republic of Latvia H.E Mr Raimonds Vējonis. The former President of the Republic of Latvia, Prof. Dr. Vaira Vīķe-Freiberga, together with the former Minister of National Defence of Poland, Mr Antoni Macierewicz, and Director of the International Centre for Defence and Security, Mr Sven Sakkov, the panelists, looked back over the last century, discussing what lessons can be learnt and what the future may hold. The participants debated on the challenges of the modern times, including the security of the Baltics, the future of NATO and the EU.

The ministers of Defense of Latvia and Lithuania, Mr Raimonds Bergmanis and Mr Raimundas Karoblis, respectively, joined Lt.Gen (Ret.) Frederick Benjamin Hodges, of CEPA and Prof. Dr Julian Lindley-French to assess whether NATO can remain an important player in defense of peace in the region. The first day of the conference was concluded by understanding the mid-term economic outlook for the European Union. The Vice-President for the Euro and Social Dialogue, Mr Valdis Dombrovskis, together with Ms Dana Reizniece-Ozola, the Minister of Finance of the Republic of Latvia, Mr Christian Whiton, Senior Vice President at Banner Public Affairs, and Prof Dr Michael Eilfort of Market Economy Foundation provided their opinions.

The second day of The Riga Conference 2018 focused on the situation in Russia. Among the panelists was Vladimir Kara-Murza, a prominent Russian dissident, deputy chairman of Open Russia and one of the Russian opposition leaders. The Baltic Times sat down with him for interview which will be published in The Baltic Times Winter Magazine 2018.