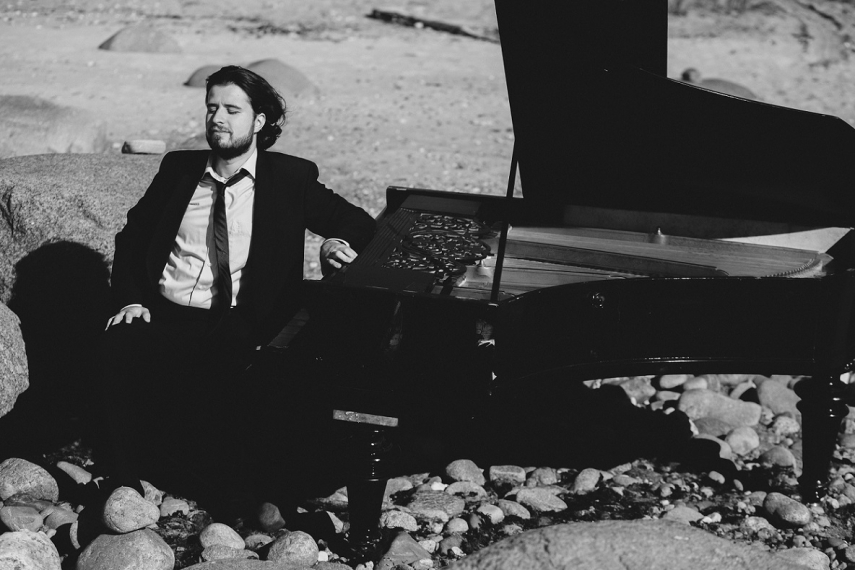 In response to the global state of emergency and the temporary suspension of all culture events, concert hall “Great Amber” in Liepāja is offering a live Easter concert for their audience. The program will feature pieces by three grandmasters of music, Johann Sebastian Bach, Claude Debussy and Ludwig van Beethoven, performed by the brilliant Latvian pianist Andrejs Osokins. The festive concert will be live-streamed from the audience-free Great Hall at the Great Amber in Liepāja, on Holy Saturday, 11 April, at 6 p.m.

“The Great Amber has been empty for several weeks now. There are around 400 people here on a normal workday –  musicians, students and teachers, actors, dancers in training, employees, and our visitors. We are experiencing an unusual time. Culture has always been alongside people – there has been music even through the darkest periods of history, and concert activity has not been stopped even during the war. The same applies to Liepāja. This weekend marks Easter, and the Liepāja concert hall wishes to be close to its audience during this celebration as well, even if from afar. For almost five years, audiences have come to us – it is now time for us to go to them,” says Chairman of the Board of the concert hall Great Amber, Timurs Tomsons.

This Saturday, 11 April, at 6 p.m., the Liepāja concert hall invites you to watch a recording of the Easter concert performed by the world-renowned Latvian pianist Andrejs Osokins, live from the Great Hall at the Great Amber. The pianist will perform a special program, prepared specifically for this Easter period. The concert will be opened with one of the most prominent German composer of all times, Johann Sebastian Bach, and his “Largo” from the Harpsichord Concerto No. 5 in F minor, and the chorale prelude “Ich ruf' zu dir, Herr Jesu Christ”. The performance will be continued by the ambassador of spring, the distinguished French composer Claude Debussy and three pieces from the Estampes cycle as well as the poetic “Clair de Lune” from Suite bergamasque. The concert will be concluded by one of the greatest masterpieces of the grand German classic, Ludwig van Beethoven – Piano Sonata No. 23 in F minor, Op. 57, also known as the “Appassionata”. Before the concert (at 6 o'clock) everybody will have the opportunity to listen to a short conversation with Andrejs Osokins about the following festive program.

The celebratory concert will be filmed in an audience-free hall with regard to all safety measures. In these trying times, the concert ticket price is set at 7 euros per one streaming connection or the so-called home ticket which allows all members of a household to enjoy the concert, to support the artist and the concert hall.

The streaming of the celebration concert is organized by SIA “Lielais Dzintars”, with the support of the Liepāja municipality and the State Culture Capital Foundation. More details on lielaisdzintars.lv. Tickets to the concert “Live Easter concert. Bach, Debussy and Beethoven” can be purchased and the concert can be streamed on the website bilesuparadize.lv.