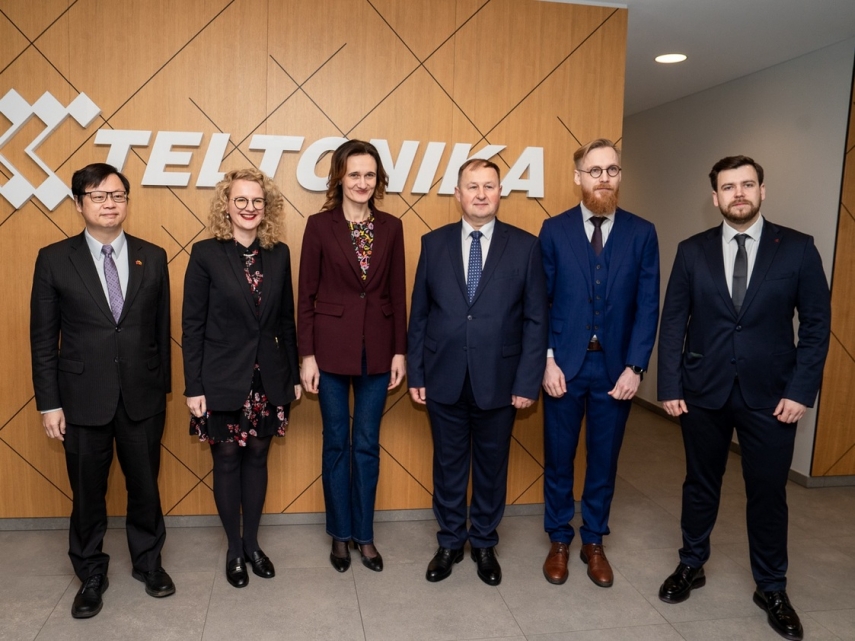 The Lithuanian high-tech company group Teltonika has signed a technology cooperation agreement with Taiwan’s Industrial Technology Research Institute (ITRI). Under the agreement, ITRI will share technologies with Teltonika that can facilitate the creation of a semiconductor chip industry in Lithuania.

The agreement entitles Teltonika to obtain licences for semiconductor chip manufacturing technologies and devices developed by ITRI.  It also ensures that the company group will get assistance in preparing detailed plans and engineering training for its employees. These are the key elements that lay the groundwork for the semiconductor chip projects in Lithuania.

"This is the beginning of the 21st century gold industry and a new phase of our economy, where we will focus on world-changing technologies. We have the potential to establish ourselves in the global semiconductor market, and this partnership with Taiwan will help Lithuania to move forward rapidly, match the world's strongest players and realise its ambitious goals," said Aušrinė Armonaitė, Minister of Economy and Innovation of the Republic of Lithuania.

"This is a truly historic event for Lithuania, as it will be the largest ITRI cooperation project with a foreign country in its 50-year history. I am thankful to the Government of Taiwan for its confidence in us and to the Lithuanian politicians for their support in the negotiations. This agreement proves that we are reliable partners capable of developing such complex projects. I believe that by implementing the planned works, we will help Lithuania to break through alongside the most advanced countries in the world," said Arvydas Paukštys, founder and president of the Teltonika company group.

He said that ITRI will provide technologies that are widely used today in power electronics, producing energy management devices such as solar inverters, electric vehicle chargers and other home and industrial electronics.

"When the idea of producing semiconductor chips in Lithuania was born a few years ago, we initially considered slightly different, more traditional technologies. However, after a thorough market analysis, we decided to develop niche semiconductor technologies used in renewable energy, electric vehicles or other industrial power module solutions. In addition, we will offer semiconductor chip design, assembly and testing services to our customers," says A. Paukštys.

Thanks to the newly established relations between Lithuania and Taiwan on common values, the technologies developed in Taiwan and the knowledge of their experts will be used in preparation for the launch of a semiconductor chip industry in Lithuania. The contract between ITRI and Teltonika is worth €14 million, of which €10 million will come from Taiwan’s Ministry of Foreign Affairs under a bilateral cooperation plan between Lithuanian and Taiwanese governments and another €4 million from the Teltonika company group. The project's total value will be finalised after more detailed calculations during the preparatory phase and after assessing the investment needed for the installation of infrastructure and the construction of factories for the semiconductor chip industry.

In Vilnius, Teltonika plans to develop such new activities as semiconductor chip design, fabrication, assembly and testing, and power module manufacturing. The company group will soon start preparing detailed plans for these projects, which, according to initial estimates, could take around a couple of years, until 2025.

After completing the project plans and estimating the necessary investments, Teltonika will begin the construction of the facilities, which could take approximately two more years. According to the technology cooperation agreement between Teltonika and ITRI, the projects necessary for initiating the semiconductor chip industry in Lithuania will be completed by 2027.

Teltonika is a fast-growing Lithuanian high-tech company group with offices in 20 countries around the world, employing around 2,500 people. Teltonika's state-of-the-art technologies and extensive design and manufacturing experience help to create high-quality and secure IoT devices. The company is proud of its unique IoT products made in Lithuania and aims to become a global leader in the design and manufacture of unique IoT solutions that help people around the world. Teltonika has already produced more than 21 million IoT devices in its modern production facilities in Vilnius and Molėtai.