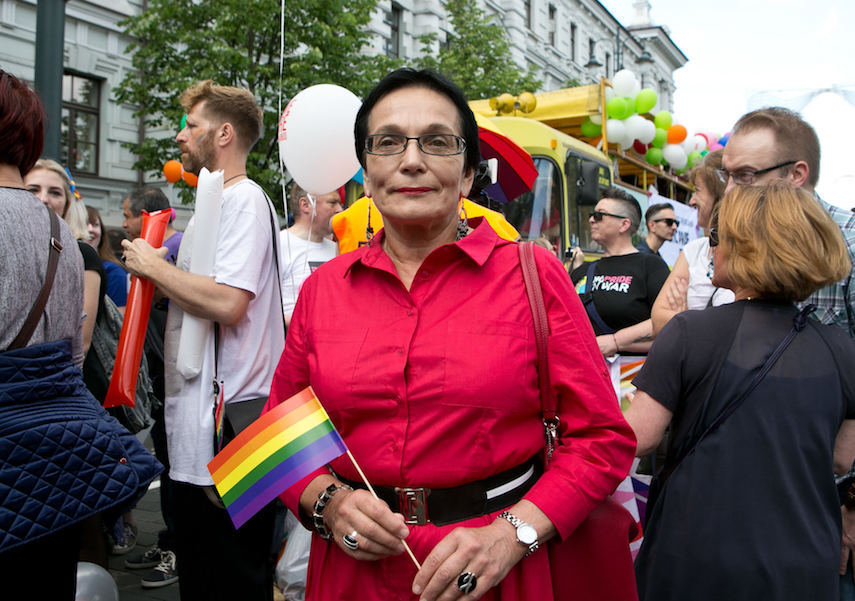 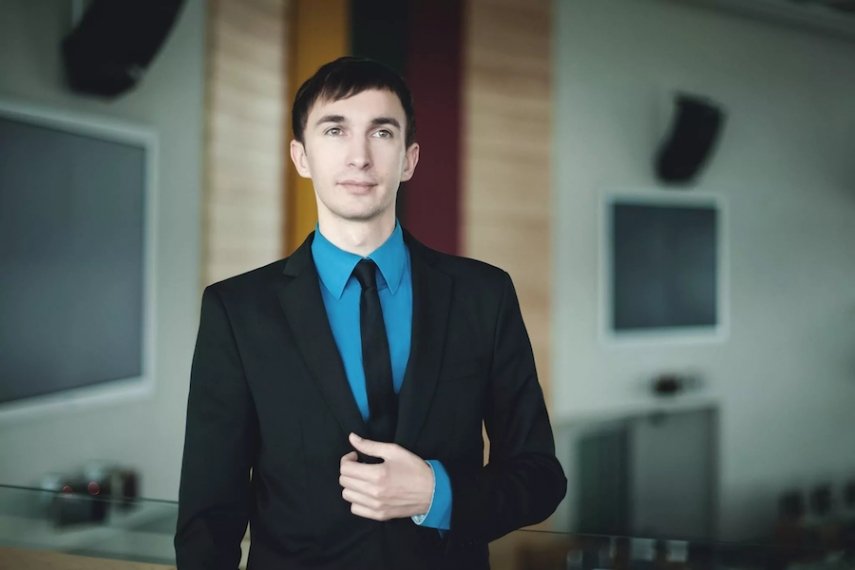 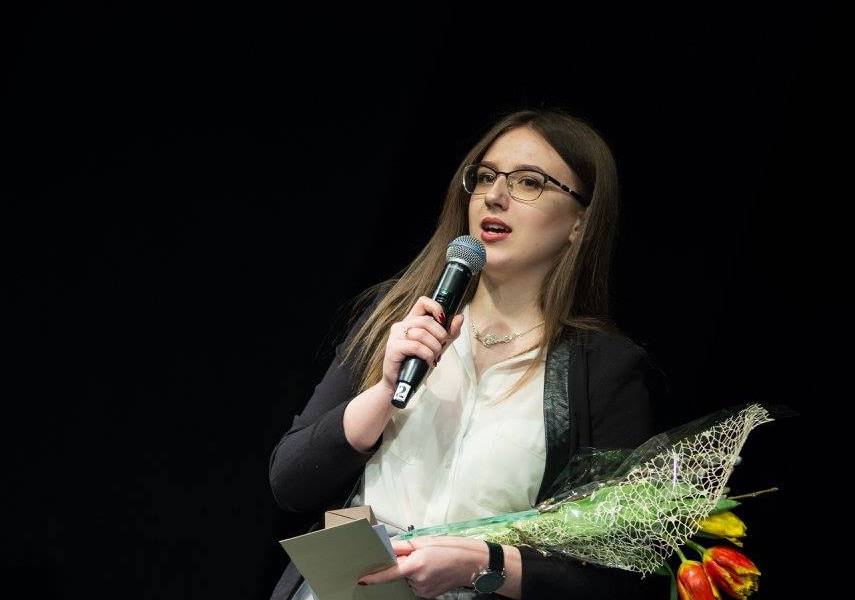 Ironically, the reality check for the politicians – and Lithuania too – came a few days later, when a brave 12th grader at a secondary school in the provincial town of Telsiai in northwestern Lithuania posted on her Facebook account a slate of clandestinely taken photos from her Religion class.

This was one of those classes that schoolchildren in Lithuania must take if they don’t want to attend the alternative, an ethics class. Normally, pupils study the Bible, as well as the history of Christianity and its impact on history, culture and social life.

In this case, however, the teacher in that classroom in Telsiai had likened gays to cannibals, serial killers, and abhorrent creatures unworthy of living on God’s planet Earth. Among other things, the teacher opined that nearly all serial killers with the propensity for cannibalism were gay men, and that up to 40 per cent of child sexual abusers have a proclivity toward homosexuality.

As the posts by Indre Pabijonaviciute, the graduate student, went viral, the Internet exploded with some comments chiding the teacher, Loreta Raudyte. But, for the most part, people praised her for speaking out against what many believe is ubiquitous “political correctness” on the issue of homosexuality. Indre, however, took the brunt of the online mockery with much scarcer kudos for her courage.

“I merely wanted to know how to react to the visual material and teaching of this kind,” Pabijonaviciute said. “I hoped that some of my friends would weigh in on it, that’s all.”

In a matter of hours, Lithuania found itself engulfed in a kerfuffle, with major news sites teeming with the details of the anti-gay teaching material and corresponding photos.

The school’s principal, Zydrunas Zelnys, the city’s Mayor Petras Kuizinas, and the Lithuanian Education Minister Jurgita Petrauskiene, were quick to respond, denouncing or at least questioning the teacher’s rendition of the subject of homosexuality and gay lifestyle.

Petrauskiene was particularly blunt, condemning teacher’s comments and questioning her suitability to continue in the profession.

“I don’t think that a teacher who was using this kind of teaching material in her classes can further work at a school,” the minister said at a government meeting. “It is very annoying to know that during Religion classes, teachers employ amateur, biased, and modern research-defying studies that are inconsistent with our teaching programs.”

Yet Lithuania’s top political leaders – the president, the prime minister, and most parliamentary members, including the two who drafted the resolution renouncing Chechnya’s gay persecution (Kestutis Masiulis and Emanuelis Zingeris) – stayed tight-lipped.

Approached now for comment, Masiulis said that the situation of gay people in Chechnya and Lithuania are nowhere “close.”

“Being homosexual is life-threatening in Chechnya. In Lithuania, being gay is not a big thing nowadays – more and more people tend to come out, although our society is still in transition to being more accepting and perceptive of the community,” he said.

“Indre did admit to us that a local judge had warned her of ‘legal consequences’ if she continued speaking about the teacher,” he added.

The underlying issue of what may seem a single case of homophobia in the Lithuanian hinterland is far more acute: widespread homophobia and the absence of sexual education – one proper to the modern age – at schools.

“Things relating to sexual education are completely overlooked or snubbed at schools. All the teaching about sexual education is about a single thing: how to control sexual urges,” Rudomanskis said.

A former Social Democratic parliamentarian, Giedre Purvaneckiene, agrees, saying that Lithuanian educators shy away from talking to schoolchildren about the birds and the bees.

“They just don’t have the obligation to do it. Of the European Union’s 28 Member States, only in eight of them, including Lithuania, sexual education is not mandatory at secondary schools,” she said. “Thus we have a teenage pregnancy rate higher than the EU average, as well as homophobia and the consumption of contraceptive measures among adolescents is at a lower age in Lithuania among EU Member States.

In a 2015 Eurobarometer survey, Lithuanian came on top as the most homophobic country in Europe, with a whopping 44 per cent of respondents claiming they would be “utterly unhappy” if a fellow co-worker or neighbour appeared to be homosexual.

Until now, two sexual education programmes – “Preparing for Family” and “Health Nurturing” – have been part of the school curriculum, but they have been optional, meaning the schools could choose whether to teach them or not.

Besides, they were all mainly about chastity, not about providing tips for a healthy sexual life and acquainting schoolchildren with non-traditional sexual orientations.

“Since they were not mandatory, schools would rarely use them,” a teacher from Palanga Senoji Gimnazija, a secondary school, in the town of Palanga, said. “As a rule, in Lithuania, pupils receive bits of information about sexual life during Biology lessons.”

Meanwhile, Ausrine Pavilioniene, a former deputy in parliament and staunch LGBT rights supporter, believes that no turnaround on the issue can be expected unless a change comes at the Ministry of Education.

“Unfortunately, it is teeming with conservatives and bureaucrats who reflect the views of the dogmatic Lithuanian Catholic Church,” she wrote last year on the alfa.lt website. “Although we’ve been having various discussions on adolescent sexual education since 2001, envoys from the Church have managed to retain their grip on the young human being’s intimate world, striving throughout to govern each person’s consciousness, the family, and community relations.”

Pavilioniene also complained that Catholic teaching dogmas permeate the sexual education program in the making, too, making it futile to expect a change in the upcoming sexual education program. “We hear in it one thing – chastity – and also some opaque mumbling about precarious situations stemming from intimate relations, but not a bit is said about the variety of human sexuality, sexual orientation, sexual identity, sex reassignment, and so on.”

Still on the job

Although Telsiai law enforcement opened a case following the scandalous posting, the prosecutors’ resolve fizzled out soon, and the case was closed in late June. That was in spite of a ruling from the ombudsman of Lithuania’s Service of Equal Opportunities that had found Loreta Raudyte, the teacher, guilty of breaching the Law on Equal Opportunities, as well as some other legislative acts.

“Teacher Raudyte assured us she did not strive to promote hatred and enmity against people of a different sexual orientation,” principal Zelnys wrote in reply to a query from the author. “Just the opposite, she underscored that she would always endeavour to embrace every person along the way.” He added that a deputy principal would be monitoring the teacher’s performance, and that the school is implementing a range of measures aimed at fostering tolerance, including that for gay people.

In a written reply, the Lithuanian Ministry of Education and Science, said that the teacher’s chosen material was not foreseen in the so-called general nurturing program, which sets out the main principles and guidelines of education.

“A new sexual health, sexuality nurturing, and preparation for family program for school curricula was drawn up last year, having heeded the recommendations of the World Health Organization and health specialists … It accentuates that teachers have to speak only with dignity and respect for people of a different sexual orientation, and any discrimination or belittling is prohibited,” the reply reads.

The ministry also said that it had – along with Lithuania’s Catechetic Centre, which helps teachers of Religion with teaching material –crafted recommendations for those educators.

“By October, we aim to present a methodology outlining how to select proper sources of information,” the ministry added.

But Rudomanskis, of the TJA, is sceptical that, with the new sexual education program in place, things will change for the better for many homosexuals in the country.

“To improve the situation of the local LGBT community, Lithuania first needs to remove the discriminatory provisions in the Law on the Protection of Minors Against the Detrimental Effects of Public Information. It is preposterous that the law deems any information about homosexuality and gays detrimental to youth,” he said.

In a 2015 survey assessing gay rights, ILGA-Europe, a LGBTI advocacy organization, placed Lithuania on the 25th perch of the bloc’s 28 Member States. Only Latvia, Bulgaria and Romania did worse in the ranking.

“Our biggest accomplishment was that we managed to embed some anti-discriminatory provisions on the ground of sexual orientation into the new sexual education program. However, I don’t see our teachers talking about what needs to be said about sexuality, sexual identity, etc. – scientifically,” the TJA leader underscored.

The young student that brought the issue forward told TOL that it wasn’t easy being a whistleblower.

“Indeed, I had to experience some physical violence, mostly in the form of pushing, and also had to deal with a lot of mockery at school and outside of it,” Pabijonaviciute says, adding that a large share of the bullying took place on her Facebook page.

Yet she also regrets what the teacher, Raudyte, had to go through, saying that not everything in the classroom was so inflammatory.  “I was sorting out the wheat from the chaff – what perennial values are and what is an outdated approach,” Pabijonaviciute underlined.

“As we live in a country abiding by law, I was dismayed by her public nailing on the cross …Yet there has been a share of smart and good discussions, which have taken all of Lithuania a step forward to empathy and tolerance, I believe,” Pabijonaviciute says. “I’ve received support at the school, town, the Association of Lithuania’s Tolerant Youth, and from all over.”

The article first appeared on www.tol.org