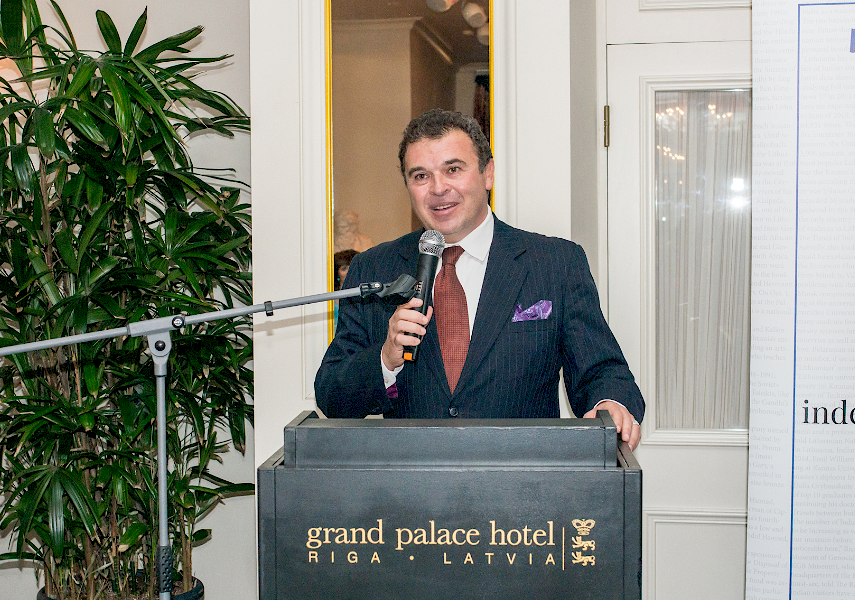 NEWSPAPER MAN: Gene Zolotarev, publisher of The Baltic Times, on the importance of the free press to democratic society in the Baltic region. 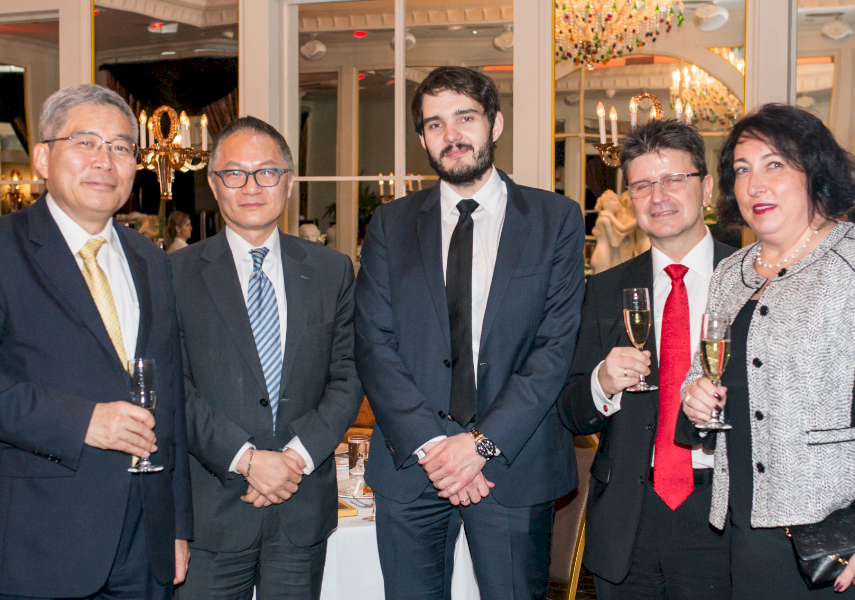 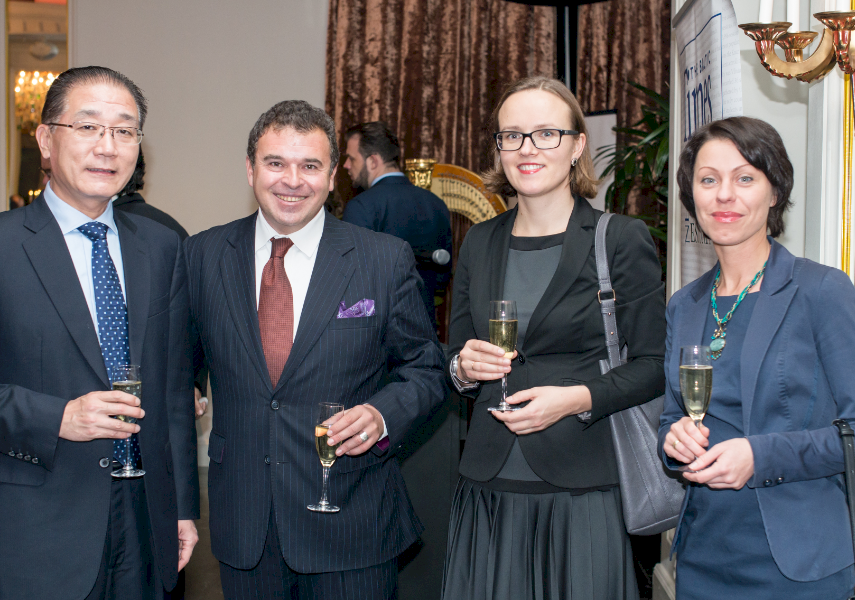 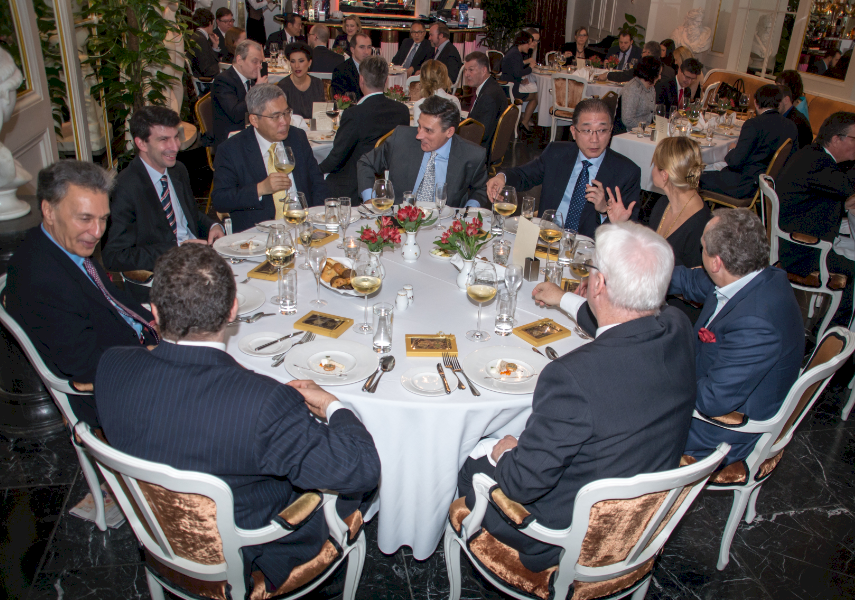 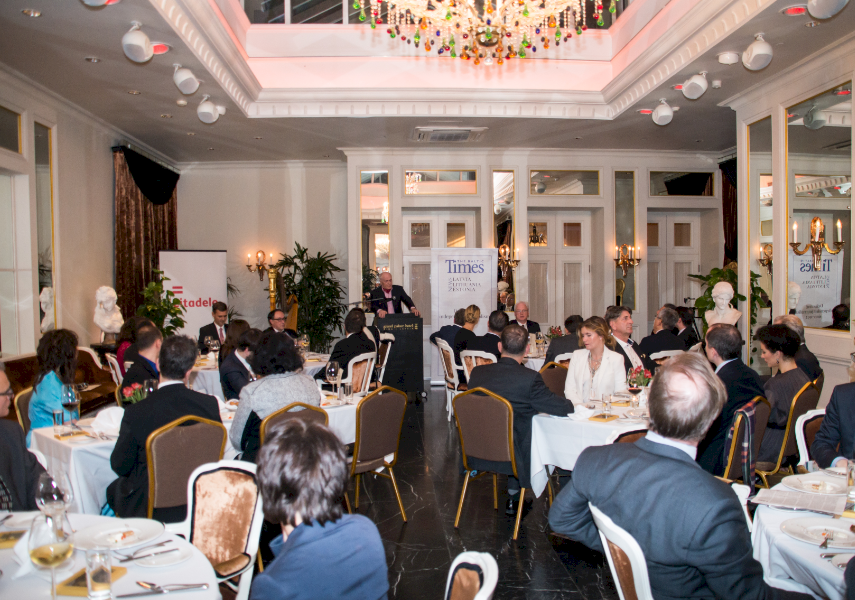 RIGA — Another year, another glorious gala dinner to celebrate and support independent journalism in the Baltic region.

This is the second year The Baltic Times has hosted the event, which was founded by Gene Zolotarev, the newspaper’s proprietor and chairman, to help support and nurture the next generation of journalists in the Baltics.

“The philosophy behind the event is simple,” noted Zolotarev in an interview just before the gala dinner got underway. “I believe in the important role journalism plays in strengthening civil society, and I believe that good quality journalism cannot be conjured out of thin air. It takes years of training and support.”

“That’s where this event comes in,” he says. “A number of great journalists have come through our ranks over the years — Ben Smith, the editor and founder of Buzzfeed; Aaron Eglitis, one of Bloomberg’s top journalists; Ed Lucas, a senior editor at The Economist … the list goes on.

“What this event is all about is making sure The Baltic Times remains an essential training ground for the next generation of journalists, just as it was for the last.”

He pointed to a series of essay competitions and internship programmes offered over the last year as just a few of the ways The Baltic Times has been working to discover and train the next generation of Baltic reporters.

““This region is very close to my heart,” said Zolotorev in his keynote speech.  "What happens in the Baltic States is important to me.”

The result of a merger between The Baltic Independent and The Baltic Observer in 1996, The Baltic Times continues to bring objective, comprehensive, and timely information to those with an interest in the Baltic Sea region with its fortnightly newspaper and daily online presence.

It is the only newspaper providing independent news in the English language from the three Baltic States of Latvia, Lithuania, and Estonia.
The Gala dinner took place in the heart of the Latvian capital, beneath the chandeliers and amber tinted lights of the main Ballroom in Riga’s Grand Palace Hotel. Dignitaries, businessmen, journalists, and diplomats were there to show their support.

“In a region that is at the crossroads between two political systems, support for free and independent media is crucial as it has a critical role in upholding high standards of governance,” said the Austrian Ambassador to Latvia, Dr Arad Benko, who was among many Ambassadors attending the Gala.
Writing to The Baltic Times after attending the Gala, Benko stated that independent journalism “helps lay the foundation for more accountable relationships between states and citizens.”

Accompanying the sumptuous dinner were a number of high profile keynote speakers, flown in from across the world.

Among them was Dr Valdis Birkavs, a former prime minister of Latvia, now a member of the Club de Madrid, an exclusive gathering of the world’s leading statesmen.
His speech delved straight into the geopolitical situation, and the challenges Latvia — and Europe — now face with a resurgent Russia in the east, and the ongoing migrant crisis to the south, threatening to undo Europe’s institutions unless its leaders adapt and show sufficient resolve.

“I was impressed that so many prominent diplomats and businessmen supported this independent journalism initiative,” he told The Baltic Times after the event. “I was proud to be associated with such important cause and hope that this event will serve as a foundation for the future of our democracy.”
Next up was Elisabeth Braw, an award-winning journalist at The Economist, Newsweek, and The World Affairs Journal. Braw has also taught at the Reuters Institute of Journalism at the University of Oxford, and has reported extensively throughout the Baltic Sea region.

She spoke about the challenges faced by journalists in the 21st century, and stressed the enduring importance of rigorous local journalism in today’s news cycle. She also highlighted the ability of journalism to counter corruption by delving beneath the surface of current events. She applauded the Riga-based investigative journalist unit RE:Baltica in this respect.

“Dreaming big won’t turn every young reporter into a Woodward or Bernstein, and indeed there will more likely be a lot of slogging in the local news department,” Braw told The Baltic Times. “But that has great value, too, because if journalists don’t report on local corruption or potholes that are never repaired, who will? As Albert Camus said, a free press can be good or bad, but press without freedom can only be bad.”

Next, after servings of wine, came Slava Rabinovich, a Russian-American hedge fund manager and an overnight internet sensation, with over 100,000 followers reading his analysis of the future of the Russian economy and its politics.

The underlying theme of the event was the importance of social media, and Rabinovich’s prolific blogging has gathered popularity which far exceeded his own expectations. His standing in the world of social media is fascinating proof that social media is a vital component not only for traditional media to get their message to an ever wider audience, but for individuals with a fresh perspective and a story to tell.

“I don’t call myself blogger, but I have been ranked in the top ten Russian language speaking bloggers in the world,’’ said Rabinovich.
Rabinovich was himself stripped of Soviet citizenship just before the collapse of the USSR, and he applied for political refugee status at the US Embassy in Rome. He flew into the US as a refugee.

Rabinovich travelled east again in 1996, moving to Russia to start working at the investment fund and asset management company, Hermitage Capital Management, a company specializing in Russian markets which was to become astoundingly successful under the leadership of its founders, Bill Browder and Edmond Safra.
“The fund was to become the largest investment fund in the world in Russia, managing assets of 4 billion dollars,” Rabinovitch mentioned during his speech.

Hermitage Capital ended up in tragedy and triumph. A Russian government crackdown led to the imprisonment and subsequently the death of Browder’s lawyer, Sergey Magnitsky, in jail, as Hermitage Capital was barred from operating on the Russian market. But the triumph came when Browder was able to push through landmark legislation in the United States — the Magnitsky Act, which calls for stricter regulation of money laundering from Russia.

Rabinovich went on to be the Founder, Chief Executive Officer, and Chief Investment Officer at Diamond Age Capital Advisors Limited. Rabinovich was the Founder, Managing Director, and Chief Investment Officer of MCM Capital Advisors Limited and the Head of its Moscow branch from 2001 to 2003. He came to MCM from Renaissance Capital where he served as Head of Domestic Asset Management.

Watching on was one of the biggest names in US print media — Andrew Higgins of The New York Times, who had flown into Riga for the weekend, and has spent many years reporting on the region.

Opposite him, Annabelle Chapman, one of the rising stars in the region: The Economist’s Warsaw correspondent, and a contributor to Monocle and POLITICO Europe.

Sponsoring the event was one of Latvia’s biggest banks, Citadele, which was the Gala’s Gold Sponsor. The Silver Sponsor was the up and coming company Icon Furs. Other supporters included Luxury Chocolate, Roma Riga Consulting and Fantini coffee.

Indeed, the evening provided a number of culinary treats for the guests.

An adjacent room to the main dining room was decked out as a chocolate fantasy land by the company Luxury Chocolate, who provided guests with custom made gift chocolate and a delightful fountain of hot edible prime quality Belgian chocolate.

“Our passion is extraordinary chocolate and our business is printing your text, logo, photo messages directly onto chocolate using state of the art technology,’’ said ​Oleg Astakhov, the General Manager of Luxury Chocolate.

“We use paint that is edible and made from natural ingredients making our products ready for consumption. We use world renowned Belgian chocolate to produce our goods. That includes three major chocolate types: dark, milk, and white as well as specific tastes,’’ he said.

“Apart from printing onto chocolate we can also make the chocolate itself the exact shape you need, even as complex as 3D. Custom print, custom taste, custom shape, and custom packaging — all components to address your personal requirements and anything your imagination can come up with.’’

The evening also saw a barista Italian atmosphere being created by the Italian Adriano Carlesi of Roma Riga Consulting, who provided premium Italian Fantini coffee products for the guests.
“It has been our pleasure to have been involved with The Baltic Times Gala Dinner and in the support of young journalists in the Baltic region,’’ said Carlesi.

The proceeds of The Baltic Times Gala Dinner will go to assist young Baltic journalists – the winners of TBT essay competitions – as new aspiring beacons of truth and transparency in Baltic society.

“I will continue to give my full support to the paper, which even in changing times in the media industry has been able to transform itself and remain relevant in reporting on issues that are of importance to both supporting democratic process, and of covering issues of importance to the Baltic States,” said Zolotarev.