Standing up for fellow Latvian artists 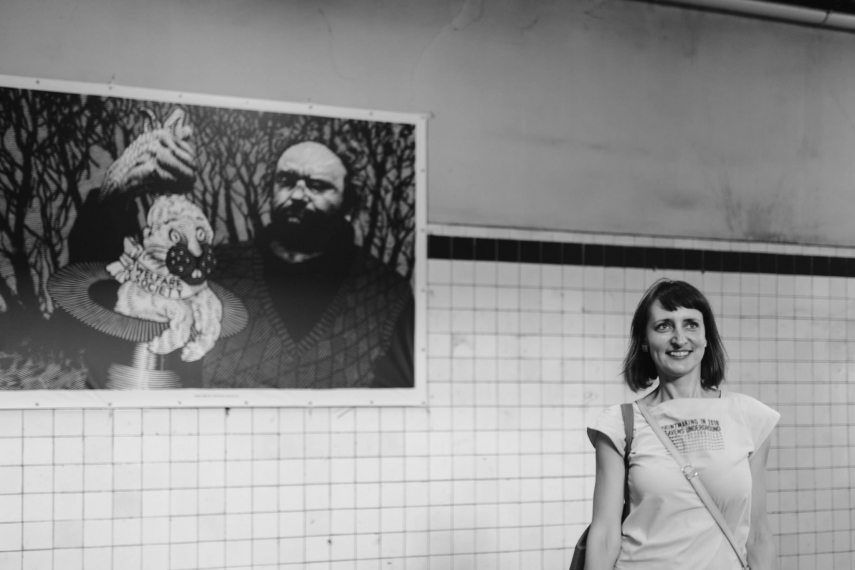 I caught up with Ieva Naglina, an art expert and the organiser of this year's Printmaking In festival in Latvia, on the second floor at Latvia’s room9 art gallery, a space she designed in Riga. Despite being very busy, she found some time for a conversation about the festival and about art in general.

The Printmaking In festival has just drawn to a close. What were the major highlights in this year’s festival and what were the differences in comparison with the previous year?

The feedback has been positive for the most part. This year we had other countries [participating], and the artist line-up was essentially different. We treated the content with much greater responsibility. Much of the artwork was created specifically for the festival's exhibitions. In our choice of artists, we paid more attention to whether their work corresponds to the theme of the festival.

What exactly is the meaning behind Heavens’ Underground as the motto of the festival?

On the one hand, the motto includes two words: Heavens and Underground. The overarching theme is contrasts, the combination of incompatibles or, in other words, the meeting of opposites in our daily lives. I have personally experienced seemingly opposite things interacting and coexisting. We encouraged the artists to think about this as well. I have to point out that a large share of the artists participating in the exhibition represents the underground culture, so it makes sense to include this word in the motto.

Were there also artists representing the heavens culture?

I believe the ‘Heavens’ part is also logical, because art as such speaks of values and spiritual, immaterial things. For example, it is impossible to explain a work of art that has no practical application whatsoever to a pragmatic person. In that respect, ‘Heavens’ is the part that brings the spiritual enjoyment of the idea.

So, the aim was not to show contrast between both directions, right?

To combine the contradictions, that was the aim.

Did the festival have any subtext? Or is Heavens’ Underground a form of subtext itself?

I believe the latter is rather the case.

Did visitors of the festival feel surprised?

The question is about his or her expectations... because the audience is very different. First of all, there were several activities and events. There were seven exhibitions and another one in Pärnu, which was organised by us. But, to answer your question, I believe it depends on the exhibition. Because it is very general: was the viewer surprised and did he get what he expected. This theme was important for me personally to avoid creating contradictions, as we often like to divide and categorise. In my view, the search for openness, tolerance and togetherness were the key themes we tried to convey to the audience.

As for ‘printmaking’ itself, what kind of art is it? What kind of technique is used? What are the techniques that are allowed to the participants of the festival?

(Laughs) First of all, nothing is off limits to the participants of the festival. The closest definition or translation of ‘printmaking’ is ‘graphic arts’. In English, ‘printmaking’ literally means ‘print’ and ‘printing’, but the term ‘graphic arts’ is also used in English. If we speak about graphic arts, it can primarily be defined as a proof, an impression on a surface. Traditionally, printing has been done on paper, but proofs are printed on different materials today. Second, we can look at the concept of graphic arts from a broader perspective by giving up the stereotypes that it is black and white and that it is something flat. For the most part, it has historically involved working with a kind of relief: a letterpress or intaglio. We form a relief to create an impression of it in this finished work or proof. A part of the pieces in the exhibition are three-dimensional. There are performances, installations and objects; as a matter of fact, we don’t impose very strict limitations on the artists.

Nevertheless, most of those invited to the festival are graphic artists, right?

Mostly yes. If they are not graphic artists in the pure sense of the word, there is an aspect related to graphic arts in their creative work.

About the artists themselves. We already discussed how the festival does not want to put art and artists in opposition. You don’t want to divide the society, and the festival probably doesn’t categorise the artists either. But still I have to ask: did you see the artists divided in three groups that I could describe as the conformists, the rebels and the marketing-oriented artists (those focused on selling their work)?

Hmm... a very interesting question. Ok, I will start with the first two. I don’t categorise artists like that of course, but I can say that there are those who are somewhat more ‘peaceful’, whose message is not radical and the aesthetic language they use is not rude or aggressive. It’s rather peaceful and intelligent. Then there are other artists, but it is very difficult to set some kind of boundaries there. I would speak about the artists’ form of choice rather than their classification. For example, photography and video are unobtrusive in nature. Except perhaps if it’s a large photograph and an aggressive image. More activity can be seen in the performance section where the audience gets influenced in a more direct and imposing way. As for the third section... if there are any artists who use the festival to attract buyers... hmm... I have always found it to be the other way round, namely that the festival uses these artists to raise its prestige. This is more relevant for young artists, but the festival focuses on experienced ones who have already made a name for themselves.

We cannot deny the contribution of mass media in promoting the festival, showing its progress and reporting criticism. Has the festival received any criticism?

There has been some this year, yes. Not bad... (laughs). The festival has earned attention from local art media outlets. The small number of cultural media in Latvia provide this coverage every year.

I would like to discuss the role of media in art. Can I ask... Could it be so that these more ‘peaceful’ artists who, as it turns out, were also in your festival, kill media interest?

I believe the question is not about the role of media, but rather about the purpose of art. Who says that art must definitely be very appealing, enjoyable, entertaining or impressive? There are artists of the ‘conformist’ type as you say; they might have a deeper message behind their art. For example, let’s make a comparison with psychological types. There are introverts and extroverts and you are asking for artists to be extroverts. But I believe the introvert artists succeed in addressing the introvert part of the audience and they also have the depth. Those who are expressive and ostentatious sometimes have a flashy character, and the basis of their work is not always strong and lasting enough.

I believe the answer lies in the role of media in the society. Should the media collect exclusives to boost their popularity or should they provide an objective coverage of the events in Latvian culture. I believe they should report on the events. And if everyone spends half a year making absolutely correct, uninteresting, boring art exhibitions, the media coverage should reflect this. Does it mean there’s going to be no news about culture for half a year? I don’t think so.

Do you believe that the Art Academy of Latvia  is currently at the head of the artist community?

It’s difficult to say, but I think it is. The Art Academy plays an important role, because the majority of artists have gone through this institution. The Art Academy is the main institution of higher education for art in Latvia, so this is an important beginning in an artist’s career. I think it’s too strong an assertion that this is the main guiding force only because artists have graduated from it. When does an artist make the biggest impact with his work? I believe it’s when he has matured, namely, when he has cut his ties with the Art Academy and has become an independent artist.

If yes, then, I’d have to ask who might be commissioning this correct art. It’s clear that the Art Academy consists of artists and personalities with their opinions, and it goes without saying that they influence their students with their opinions during the studies. The lecturers have followers and opponents, of course. After graduation, contacts are retained, and they might remain as the specific artist’s role models.  But, in my opinion, the artist’s best work comes out when he cuts this umbilical cord with his teacher. If the artist retains his professor’s influence, he essentially speaks the professor’s artistic language. As a result, the guiding force is the professor, not the artist himself. Therefore, I believe the artist needs to cut these ties if he wants to push his own ideas forward.

The artists interested in making money are in a separate category. If we assume that art is free from politics and the government, can we say that there is a degree of self-restriction by the artists themselves? Is there such a thing as self-censorship by the artists in Latvia?

Yes, but the question is rather about the people in Latvia and whether they have self-censorship... It’s more about the human factor, not the professional one. If I have self-censorship as a Latvian, I will have it as an artist as well. There are artists who speak about political processes. And there are those who are quite fearless in talking about politics, I mean those who talk about it at all. But it’s not that every artist is interested in political topics.

If an artist restricts himself and doesn’t realise his or her full potential, isn’t that harming the country?

I believe that the society loses something even if one police officer or a representative of any other profession doesn’t realise his full potential!