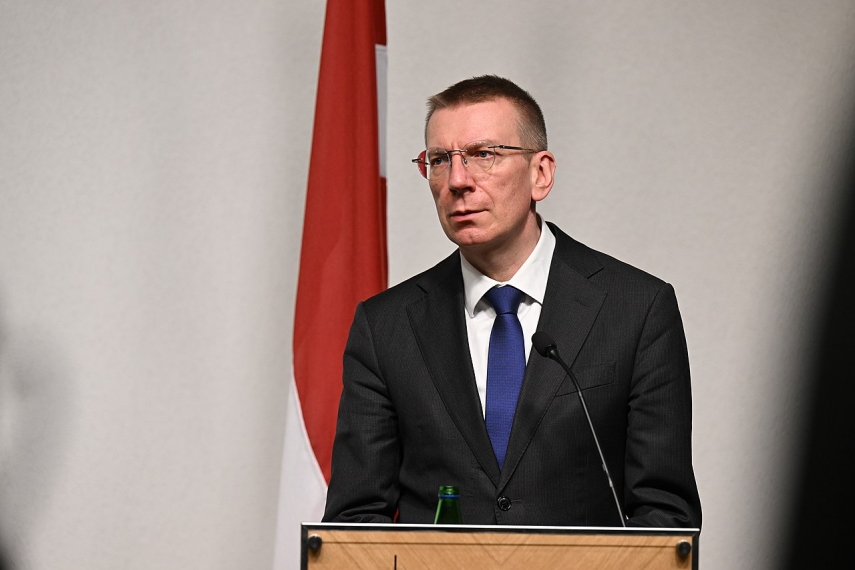 RIGA - After the occupied territories of Ukraine are liberated, sanctions on Russia must remain in place until Russia recognizes Ukraine's independence, sovereignty and territory in its internationally recognized borders and pays for Ukraine's reconstruction, Latvian Foreign Minister Edgars Rinkevics (New Unity) said in his annual report on Latvia's foreign policy and EU affairs.

The minister noted that Latvia together with its partners must continue to work on a better coordination and implementation of the sanctions and prevent them from being dodged. Latvia is prepared to increase the sanctions pressure, expanding or deepening their scope, Rinkevics said.

The foreign minister indicated that stepping up sanctions on Russia has become one of the most important instruments that help restrict Russia's ability to finance and wage the war against Ukraine, as they increase the political and economic costs of the war.

The foreign minister indicated that the sanctions targeting the energy sector include a ban on Russian coal and oil imports, as well as a price cap on the oil that is shipped from Russia to third countries. There is also a ban on investments in the Russian energy sector and exports of gas processing goods and technologies to Russia.

The Western sanctions have also hit several Russian banks, halting transactions with these banks. The Russian central bank's reserves have been frozen and a number of Russian commercial banks have been denied access to EU capital markets. A ban has been introduced on EU public funding and investments in Russia.

The sanctions also include more extensive trade restrictions with Russia, including a ban on exporting dual-use goods and technologies. There is also a list of goods and products EU member states are prohibited from importing from Russia. They include commodities like iron and steel, timber, cement and gold, among others.

Rinkevics stressed that Russia's ruling elite, who is responsible for Russia's aggression in Ukraine, has been sanctioned by restricting these people's possibilities to travel and freezing their assets in the EU. At present, there are 1,836 names on the list of sanctioned persons, including Russia's top state officials, lawmakers, members of the National Security Council and other individuals close to the Putin administration like oligarchs and Kremlin propagandists. Sanctions have also been slapped on 171 legal entities and Kremlin propaganda has been restricted by banning nine Russian propaganda outlets in the EU.

According to the foreign minister's report, Latvia will support an EU-level solution that would allow using the frozen Russian assets for the reconstruction of Ukraine. According to Rinkevics, it is essential to harmonize the regulation by criminalizing serious sanctions violations and ensuring that providers of services and consultations who help Russia dodge the sanctions are also called to account.