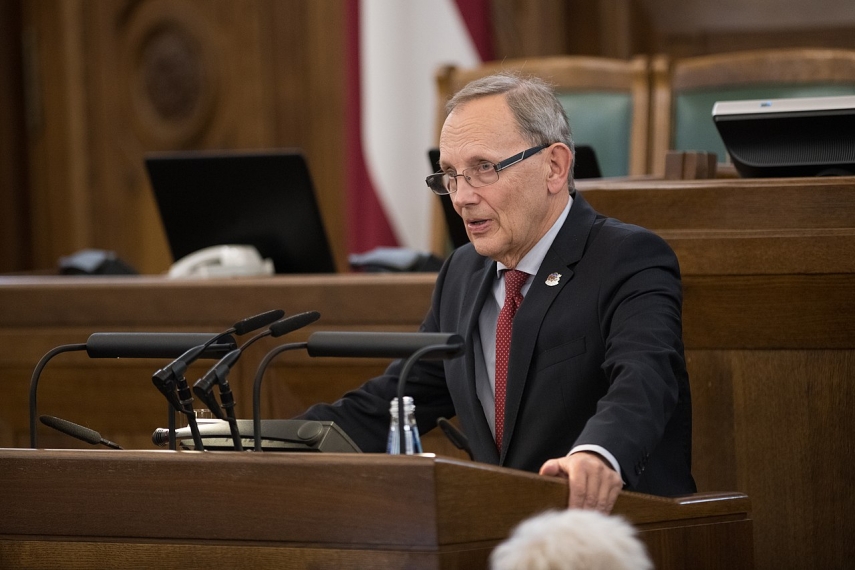 RIGA – The Saeima today rejected to include in its agenda the proposal of For Development/For parties to include discussion of the bill on restitution of Jewish properties seized from the Latvian Jewish community during the holocaust and the Communist regime.

MP Aleksandrs Kirsteins (National Alliance) said that the Jewish community has already been compensated for the lost property, and the Jews, considering the historical events in the Latvian territory, are not the only community that should be compensated.

In the vote, 37 lawmakers voted in support of the issue, 37 votes were against, and five lawmakers abstained.

If Saeima does not put a bill on its agenda for the plenary session, it has to be reviewed during the next plenary session. It means that next week, on June 20, Saeima will decide whether to send this bill to the parliament committees.

As reported, in order to compensate the Jewish community of Latvia for the real estate seized illegally during the Holocaust and Communist totalitarian regime, For Development/For is proposing to pay the community compensation of EUR 40 million.

According to the party's motion that will be discussed by the ruling coalition partners, the payment will be made in installments over a ten-year period from 2021 to 2030.

The compensation would be paid to the Latvian Jewish Community's Restitution Fund. The fund would then only use the funds allocated to finance events and projects that deal with religion, culture, education, science, healthcare, history, sports, charity, restoration and preservation of the cultural and historical heritage of Latvian Jews, promotion of the integration, unity and development of civil society in Latvia, management of the Jewish community and fund's properties, as well as social and material assistance for those victims of the Holocaust in Latvia who currently live in other countries.

For Development/For explains that the purpose of the initiative is "to restore historical justice and, with good will, to compensate the Jewish community of Latvia for the historical consequences of the Holocaust and communist totalitarian regime in the territory of the Republic of Latvia."

The draft legislation also provides that this compensation is final, its amount cannot be changed, and therefore there will be no other claims regarding real estate seized from the Latvian Jewish community.

For Development/For's document states that the overall damage caused to the Jewish community by the illegal alienation of real estate is approximately EUR 47.8 million. This amount is calculated on the basis of cadastral value of properties as of December 31, 2018, listed in an annex to the legislation. Taking into account the possibilities of the state budget and following the Latvian Jewish community's recommendation, the amount of goodwill compensation has been set at EUR 40 million.