Russia's misery and the West's perplexity 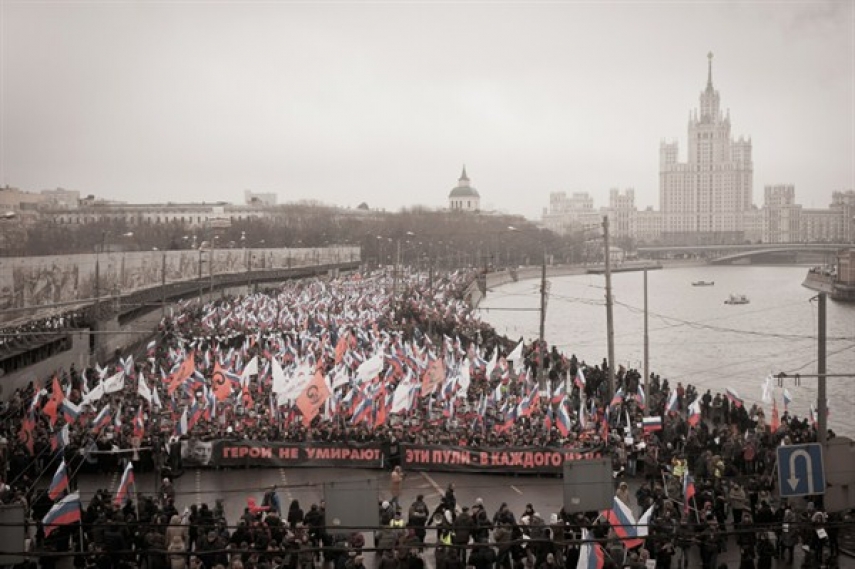 Poor Russia – here’s a country that once again has embarked on a path to more unhappiness than happiness, more suffering, misery and sorrow than joy and hope. It’s almost as if it is trying to underline how much over the centuries Russia has striven to prove that it is a country that does not want what is best for it.

With our Western mindset, it's almost impossible to understand what makes a leader like Vladimir Putin throw the nation's possibilities for success overboard, while portraying Russia as a country surrounded by enemies who only want to run it over. Darkness rather than light, paranoia and hallucinations of war rather than a world of opportunities for a better and richer life. A poisoned atmosphere that imposes upon citizens an image of the fatherland in danger and a sentiment that everything must be done to protect it.

According to a Bloomberg news story, a new report on the index of the world's unhappiest countries, ranks Russia in 7th place. With the murder of Boris Nemtsov, Russia moved up even higher on the scale. No one can doubt why Russia is at the top of this undesirable list, when you've seen Andrej Zvyagintsev's Oscar-nominated film, Leviathan, with his devastating portrayal of unhappiness in Putin's Russia - a bottomless pit of abuse of power, lawlessness and corruption without as much as a single ray of sunshine in a river of vodka, tears and grief.

My friends in Moscow cried and sobbed in despair and disbelief when I spoke to them on the phone on that Saturday night when evil again struck in the streets of Moscow, a stone's throw from the Kremlin, where Nemtsov was shot as part of one of the most notorious and cynical political murders in recent times. They found it hard to grasp that this really happened, to understand that on top of all other nightmares and misfortunes, they should now also live with this tragedy. Despite all the differences in cause and political settings, it was the same kind of shock and disbelief as people had just experienced in Paris and Copenhagen.

In a time of war and occupation in Ukraine, economic crisis and deprivation was spun into layer upon layer of lies and propaganda. Nemtsov stood as a brightly shining star. In a dysfunctional, corrupt kleptocracy, he was an incorruptible individual standing tall like a tower. For the democratically minded part of the population, he was one of the few surviving hopes that there was still a different path and a different Russia than Putin's increasingly regimented, authoritarian version. For his opponents, Nemtsov represented everything that they wanted to eliminate as a threat to the country's success.

On that fateful night when Nemtsov was lying there on the wet asphalt in a rolled-up, light blue shirt with his bare torso exposed, surrounded by detectives, his followers and supporters saw this as a direct message of warning and admonition: "This is what’s waiting for you all , for all of you who are dreaming of freedom and democracy in Russia. This is what you can expect instead of Sunday's spring march against war and crisis." Nemtsov was one of the initiators of the march and had worked tirelessly to organize it.

Less than three hours earlier, Nemtsov had given his last interview to the radio station Echo of Moscow, and enthusiastically talked about what would happen if 100,000 people showed up. It would send shockwaves through the Kremlin. He thought it would turn all the Kremlin's lies to dust and be a turning point. He ended the broadcast by inviting everyone to meet up for Sunday's march. His famous last words to the Russians.

Six hours later, he was being wrapped in a shiny black body bag and taken to the morgue. The place on the bridge where Nemtsov was shot was washed clean of his blood, and a bit later, the first incredulous mourners arrived to lay flowers, which in the following days grew into a mountain. They covered a large part of the bridge in an image, which has almost become the symbolic signature of the first two months of 2015 with a bloody line that goes from Paris via Copenhagen to Moscow. As different as the circumstances were the pain and grief was similar.

Instead of celebrating spring and marching for political reform as planned, it became a funeral march in memory of one of Russia's most colorful and dynamic politicians who died tragically, but whose name has now been immortalised in Russian history. This is Russia's situation and fate in a nutshell – it’s better to keep people in a stranglehold and let them suffer and mourn, than to let the nation's brightest talents shine, risk unbridled freedom, and make demands for political reform and democracy.

Russia's historical experience is that people who suffer and mourn are considerably easier to control and direct than people like Boris Nemtsov, who grasp the moment and try to be the best they can be, embracing a sense of excitement and love of life and its infinite possibilities. To eliminate him in a spectacular political assassination outside the Kremlin is an infallible recipe for tears and sorrow and pain and resignation. Pain and deprivation provide national cohesion. Ever since ancient Rome, "bread and circus" has been a formula for political leaders. Russia has, for the most part, had its own formula. "Bread and grief."

Putin and his inner circle have a very clear sense of this particular aspect of Russian political culture. In the past year, after the annexation of Crimea and the war against Ukraine, they have had no qualms exploiting the endurance of the Russian people and their will to sacrifice in the existing atmosphere of overheated nationalism. Suffering and sacrificing have proudly been elevated to become Russia's distinctive national virtues.

The Kremlin's message is that no other people are able to suffer quite like the Russians. Over the centuries, all attempts to invade and conquer Russia ended with the same result for the enemy hordes. "There was enough land for all of them - 2.5 square meters" – enough for a grave – according to a new propaganda video, "I, a Russian occupier" that has gone viral on YouTube (bit.ly/1EObYla) with a Twitter recommendation from Dmitry Rogozin, a deputy prime minister in charge of the defense industry and a favorite of Russia's nationalists.

Along with the likes of Rogozin and Vladislav Surkov, who from the Kremlin's kingdom of shadows control the ideology and propaganda, Putin has conjured up a familiar image of Russia as a besieged fortress. Putin, in his speeches, has revived concepts like the fifth column and national traitors by borrowing terms from the Nazi vocabulary in order to whip up an atmosphere of hatred and bloodshed against all dissenters and critics.

Since the invasion of Crimea, a propaganda war has been launched and it has been accelerating in an increasingly aggressive way. Russian insiders like Yevgenia Albats, the editor of The New Times Magazine, say that propaganda warfare has reached heights not even seen during the Cold War.

The Kremlin has mobilized patriots and nationalists on the extreme right and made bizarre alliances with groups like the Night Wolves, the Russian counterpart to the biker groups we know in the West. They feature the same symbols, regalia and tattoos with the same cult of violence as their Western biker brothers, but with the difference that they, with the blessing of the President, act as the Kremlin's vanguard and the indomitable guardians of the fatherland with a clear political mission.

Putin himself has also used the image of the Russian bear and warned that no one can tease or bully the bear with impunity. Putin's macho image is unmistakable in the use of such metaphors to project Russian power and fearlessness. But it also is distinctly clear that what should be seen as Russia's enormous strength, in fact is triggered by Russia's enormous weakness and chronic inferiority complex.

In their rush to conquer the minds and souls of their people, Putin and his spin-doctors overlooked the fact that although the bear is big and strong and dangerous, elegance has never been one of his characteristics. He is also lazy, but the worst thing about the bear allegory is that in Russian folk wisdom the bear is not very clever. He is, quite simply, stupid. Perhaps that is why he does not understand that Russia's strength as a great power is inextricably linked to the country's economy. No great power can be stronger than the national economy.

Russia is not on the verge of economic collapse, but the economic crisis is undeniable. This is serious for Russia, but also for the West and especially Ukraine – both parties have to realize and come to terms with the fact that growing economic problems and increased Russian weakness will sharpen Moscow's desire for confrontation and aggression.

For the time being, Russians have no alternative but to come to terms with their status as one of the world's unhappiest peoples, and to struggle with their historical heritage that continues to push them back to the past. Meanwhile, we in the West must realize that it's as difficult to understand Russia as it was in the past, and that the distance between the West and Russia has not decreased, but increased while we were fast asleep behind the wheel. But to state that Russia is still a riddle in the 21st century, is not a strategy. Rather, it's a sign of perplexity and cluelessness on the brink of political bankruptcy.

Samuel Rachlin, a Danish journalist based in Washington, is a former Moscow correspondent for Danish TV. His most recent book, “I, Putin – The Russian Spring and the Russian World” was published in Danish in October 2014.