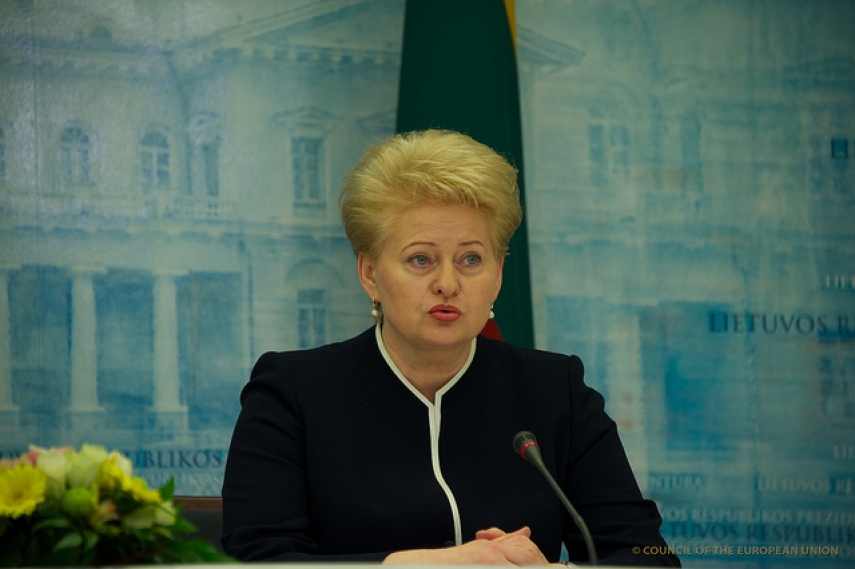 Lithuanian President Dalia Grybauskaite has accused Russia of behaving like a 'terrorist' state amid the crisis in the Ukraine.

Speaking to the BBC, the President, often dubbed the Iron Lady of Lithuania, said she would not engage Russian President Vladimir Putin in talks until his country stopped meddling in eastern Ukraine.

Baltic and EU officials have widely accused Russia of sending troops into eastern Ukraine. Moscow has repeatedly denied the claims.

"With any neighbour its important to have dialog, to speak, not to fight, to have peace. But today what we see in eastern Ukriane, we see Ukraine fighting for peace of all Europe, for sov of independent state and for international law and rule of law on its territory," Grybauskaite said.

Grybauskaite added that Russia was "behaving as a terrorist. With such behaviour what type of dialog is possible."

"The last time spoke to Putin was 2010. Don't want to speak to him in nearest future. Only if Russia changes behaviour."

The Lithuanian President also disccused plans to create a military battalion between Poland, Lithuania and the Ukraine.

"We're doing everything which is possible. By creating Battalion between Poland, Ukraine and Lithuania. Where Ukrainian soldiers will be able to train. We're sending instructors, we're accepting wounded poeple here for treatment. The rest is possible," Grybauskaite said.

Grybauskaite also discussed energy security plans and how the Baltic states was edging towards less reliance on Russian gas.

"We just opened our LNG terminal. This terminal can serve 90 percent needs of all Baltic states. We don't need Gazprom at all."