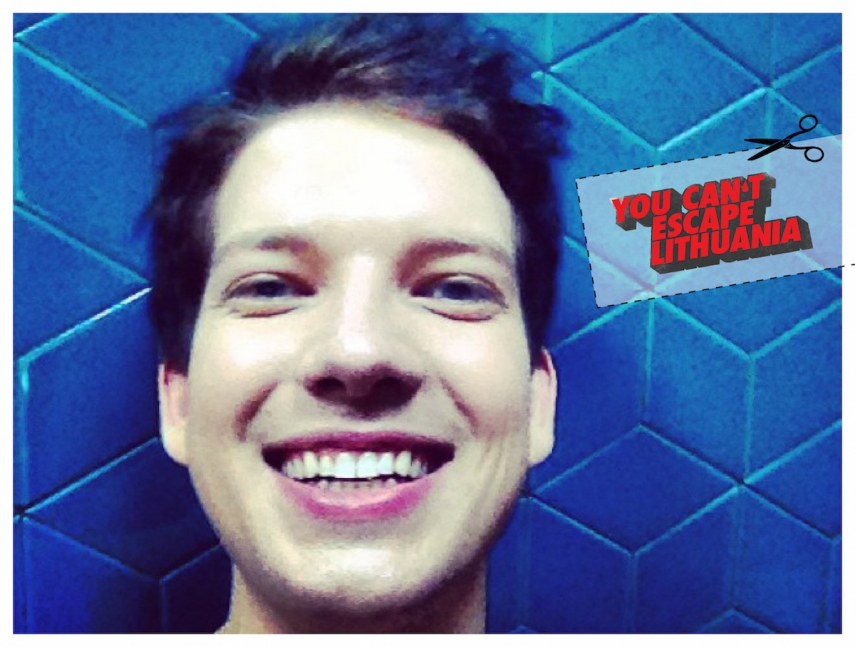 NO ESCAPE: Romas Zabarauskas’ documentary film has been provocative in conservative Lithuania.

“My new film is a fictional version of me,” the softly spoken Zabarauskas begins - a surprise for such an outspoken character. “A gay film-maker from Lithuania who helps his friend escape Lithuania after she kills her mother and steals her money. He takes his Mexican boyfriend along for the ride. On the road there are different mysteries and intrigues along the way. They start to shoot a film, but then the reality comes clear.”

“It’s essentially a queer road movie, but it’s certainly not autobiographical. I’ve never helped anyone escape from a murder,” he laughs.
For Zabarauskas, You Can’t Escape Lithuania is not only about self-expression, it’s about scaling back after We Will Riot. His last production explores homophobia, racism. and corruption - all pan-global issues - but placed into the context of post-Soviet Lithuania; a context he feels he “knows best.”

We Will Riot was “filmed between Vilnius and New York with a lot of characters, extras and settings,” so now, Zabarauskas is keen to “do a smaller movie, with a smaller budget and a handful of actors.”

“I’ve just let myself free to experiment with this one. To get wild. That’s that,” he continues. In a rare admission, for a well-known personality at least, he openly points out his upcoming work was inspired by a romantic interest. “I was also inspired by my Mexican Muse,” he laughs. “He’ll play a version of himself, too. Well, maybe not of himself, but he will definitely be in the movie. He’ll play my Mexican boyfriend.”
Then unexpectedly, he wraps up about the You Can’t Escape Lithuania’s content, and shifts onto the film’s metaphor laden title before I can quiz him on it. A fluent French speaker, Zabarauskas studied at Hunter College in New York as an exchange student, then graduated in film from a Paris university in 2012. Yet, he’s once again living in Lithuania.

“I was inspired by this other feeling I can’t actually escape Lithuania,” he muses over a point which has crossed the minds of most people who’ve set-up shop abroad. “The title is a metaphor for that, because I have escaped Lithuania in a way in that I studied abroad, but there’s something that always brings me back here.”
“Maybe I’m just stupid?” Zabarauskas he ponders. “But I feel like I know this context best and when you’re discussing these issues, you probably feel you can’t escape your original background and you can’t escape your social context. That’s what I mean in the metaphorical sense.

“I’d kind of like to live a normal life abroad; an easier life for a gay person. But, I have many friends and fans here, and I feel what I do is interesting and somewhat important.”
What he means, is highlighting LGBT issues; an issue close to his heart and moreover, a topic still viewed as a “taboo” in Lithuania among the more conservative members of society. It’s also a sentiment Zabarauskas doesn’t buy.

In 2012, he initiated the LGBT Vilnius project, an initiative which involved the Lithuanian capital’s LGBT community asking restaurants and bars to demonstrate an LGBT Friendly sticker in their window. Around 30 agreed. In 2013, the organisation then published its first LGBT Friendly map, which was updated again last year with the help of the Tolerant Youth organisation.

The conversation then switches back to the funding behind You Can’t Escape Lithuania, an issue momentarily put on the back burner while he was explaining his LGBT activism in Lithuania. On the back of admitting he isn’t “well supported by more traditional means of finance,” Zabarauskas reveals he has, rather enterprisingly, combined turning to crowdfunding website Kickstarter with the age-old idea of Sex Sells.

“Well, I’ve managed to raise more than 20,000 U.S. Dollars on Kickstarter for You Can’t Escape Lithuania. In fact, I think it’s been one of the most successful Kickstarter campaigns here, so I’m really proud and lucky about that.”
When I asked him why he feels so many people have donated, he initially responds with a shrug and an “I don’t know.” Then with a wry smile and a laugh, Zabarauskas reveals he promised to send an “arty nude photo” to anyone who donated more than 50 dollars to the project. “To be really honest, I didn’t know how well that work out, but it has,” he grins over a glass of water.

You Can’t Escape Lithuania is not Zabarauskas’ only Crowdfunded project, either. Another issue that resonates with the filmmaker is Animal Rights, and he and his film crew have teamed up with Lithuania’s largest animal rights charity, Empty Cages (Tušti narvai), to assist with the funding of his next film.

The challenge, entitled the Vegan Film Making Challenge, is to highlight the vegan lifestyle - something Zabarauskas embraced in October last year. “During the shoot,” he says, “our team, crew, and cast have pledged to eat only vegan during the shoots, and we’re trying to not use any animal based products or clothing. We’re just asking people to donate soenthing to make the challenge and film better.”
“I wanted to also use it as a vehicle of promoting veganism, but still keep it a fun way of expressing different ideas.”

And that final sentence sums up Romas Zabarauskas. When was the last time you thought you’d meet a gay, vegan filmmaker from Lithuania who is producing a “crazy queer road movie?”