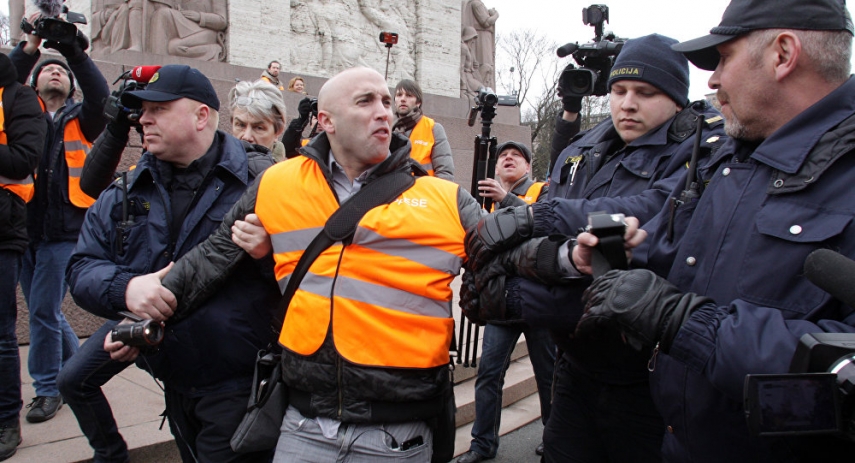 British pro-Kremlin journalist Graham Phillips has been deported from Latvia to Russia, and blacklisted from the country until 2019.

Phillips had arrived in Latvia to cover the Legionnaires’ commemoration day on March 16. He was arrested by Latvian police for disrupting events.

The news was confirmed to the BNS news agency by Interior Ministry spokeswoman, Daiga Holma.

Latvia’s Interior Minister, Rihards Kozlovskis, has also blasted Phillips for his “provocation” in the Latvian capital.

"I can confirm that Mr. Phillips was expelled from Latvia last night and has been included in the blacklist,” Kozlovskis told LNT TV. "After his activities in Latvia this March, an additional assessment was done, and I decided to blacklist him based on security services' findings.

"This was a provocation. This person, in my opinion, has shown his incompatibility with the term 'journalist’."

Kozlovskis also confirmed that Phillips has been banned from entering Latvia for the next three years.

A video posted on Periscope showed that Phillips - apparently in a hotel bathroom - explaining in Russian that the Latvian law enforcement authorities will expel him from Latvia for three years.

The footage also shows people in uniforms repeatedly telling Phillips to stop filming and to collect his belongings.

Earlier on March 16, Phillips was detained and taken to a Riga police station for resisting police orders for disrupting the day’s events.

A court has yet to rule on a penalty for Phillips.

Phillips was the only person detained during the 2016 March 16 gatherings.

This year, the events drew in between 800 and 900 participants; a lesser number compared to previous years.

British-born Phillips, currently works as a freelancer for the Kremlin-controlled broadcaster RT.

He has covered the conflict in eastern Ukraine from the separatist viewpoint.

He has been criticised for distorting facts and supporting Russian propaganda.

Phillips has been arrested also in Ukraine and arrived in the country as a sex tourist in 2010.