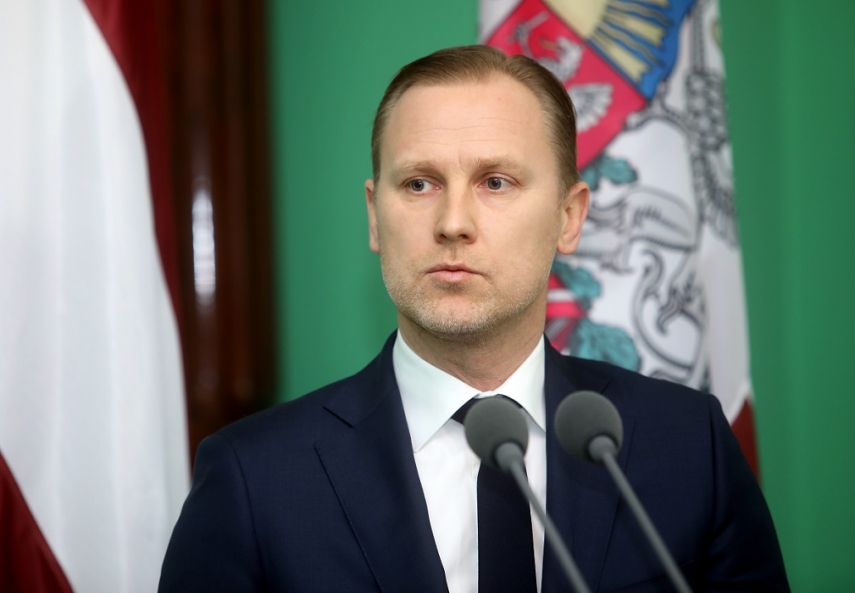 The president also gave Gobzems two weeks to secure sufficient support for his government in Saeima, pick Cabinet ministers and draft a government declaration. In case Gobzems fails to form a government, his nomination would be recalled, but Vejonis hopes that this time an agreement would be reached on Latvia’s new government.

Gobzems said that he would be forming his government with an aim to make the state and the people one. The politician thanked the president for the courage to award him the nomination.

Gobzems pledged to devote all his remaining life to work for the benefit of the Latvian nation and its prosperity.

In the last Saeima elections, KPV LV won the second highest number of votes, or 14.25 percent, receiving 16 mandates in the 13th Saeima.

Gobzems is the second candidate to be nominated for prime minister. Janis Bordans of the New Conservative Party (JKP), whom the president nominated on November 7, failed to form a coalition government and his nomination was recalled.

For the time being, politicians have not succeeded in reaching an agreement on the makeup of Latvia’s would-be coalition and government. Six political parties are currently involved in the government formation talks - the New Conservative Party, KPV LV, For Development/For, National Alliance, Union of Greens and Farmers, and New Unity.

The New Conservative Party maintains it would not cooperate with the Union of Greens and Farmers and has proposed a five-party coalition. Other parties, however, would have no objections to taking Greens/Farmers into the coalition.

Gobzems’ chances of receiving a security clearance for access to state secrets are not clear at the moment. Representatives of the Constitution Protection Bureau (SAB), which does the security vetting, said earlier that the bureau has completed the preliminary vetting of two candidates for Latvia's next prime minister who had already been issued security clearances for access to state secrets.

Such clearances had been issued to Artis Pabriks (For Development/For) and Janis Bordans (New Conservative Party) who have served as ministers of defense and justice in the past.

"The result of the examination was positive, namely, these candidates can be granted the special clearances," the SAB representative said.

The third candidate for prime minister, Aldis Gobzems, will need additional vetting, as he has never received such a security clearance before, the SAB spokeswoman Iveta Maura said.

Gobzems voiced confidence he would have no problems receiving the security clearance.

According to information from LETA Archive, at the age of 25 Gobzems was appointed director of the Insolvency Administration. Before that he was the Latvian Privatization Agency’s Vice-CEO and headed a department at the Justice Ministry.

In 2008 Gobzems set up his law firm. As a lawyer, Gobzems became known by representing victims of two major disasters - a lifting gear accident in Talsi and the more recent Maxima store collapse in Zolitude, Riga.