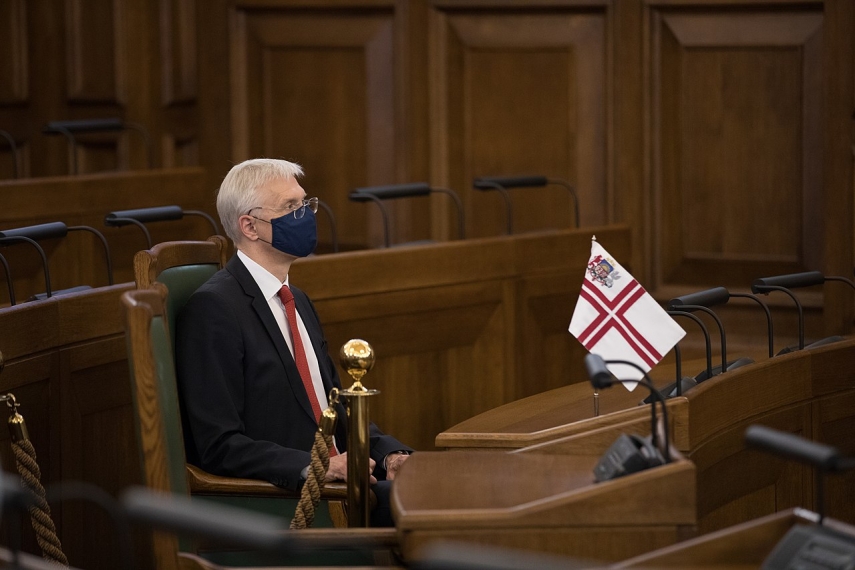 Karins said that it was not yet clear to him whether the medical association's demand for Pavluts' resignation was based on the Health Ministry's proposal to start mobilization in the health sector or there are deeper communication issues between the medics and the minister.

The prime minister also revealed that talks are being planned with coalition partners for this Thursday, October 28, and Friday, October 29, with the medical association's demand for Pavluts' resignation expected to feature high on the agenda.

As reported, the Latvian Medical Association is calling for Pavluts' resignation, accusing the minister of making numerous mistakes in handling the Covid-19 crisis and criticizing him of the plan to start a mobilization of medics across the health sector.

As Karlis Racenis, a member of the LAB board, confirmed to LETA, the LAB board vote "was unanimous", as no one voted against. Roberts Furmanis, Vice President of the LAB, similarly pointed out that the decision was made with the support of the majority of the board.

Ansonska said that the LAB calls on the head of government to immediately review the crisis management situation in the country and to involve health professional organizations and experts in decision-making.

The LAB expresses the outrage of the entire medical community about the unprofessional approach of Minister of Health Pavluts and the Ministry of Health in resolving the crisis caused by Covid-19. Therefore, the association reiterates that it is no longer acceptable for all responsibility for erroneous or untimely decisions of the government and the Ministry of Health to be shifted to health care workers "whose views have been openly ignored for two years".

The health sector also learned about the Health Ministry's intention to announce the mobilization of doctors in November from the mass media, according to a statement from the medical organization.

The association demands that the Ministry of Health and the Minister of Health "stop undermining the Latvian health care system" and take responsibility for mistakes in the organization of the vaccination process. "It should also be noted that since July 2021, the Ministry of Health has not approved guidelines for patient prioritization, as required by Cabinet regulations. This important task has been delayed and the lack of guidelines further complicates the work of medics involved in treating Covid-19 patients," the LAB emphasizes.

The LAB also believes that the Ministry of Health, with the announcement of mobilization is causing unnecessary anxiety among the population and also among medics, although since the spring of 2020 most of the specialists who volunteered to work with Covid-19 patients have not been addressed, and have done so voluntarily. Prior to mobilization, targeted resource planning and training of physicians involved in the treatment of Covid-19 patients is required. There is also no plan for where the mobilized specialists will be sent.

Vaccination is the most important preventive measure of Covid-19, the funds for the organization of which have been spent without a real return on investment, according to the LAB. Doctors say that initially the work of family doctors was despised, but now colleagues are blamed for all the problems related to vaccination.

"Similarly, instead of addressing the issue of the remuneration of health care workers, the government is seriously discussing attracting foreign professionals, which further demotivates those on the verge of burnout," the statement said.