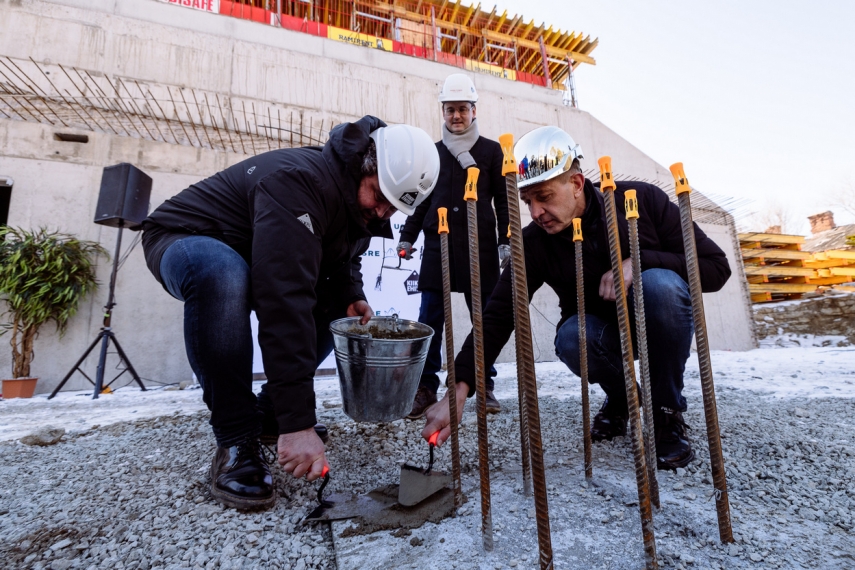 On Wednesday, 6. April, a major investment company US Real Estate represented by business man Urmas Sõõrumaa  placed the corner stone to its first, nearly-zeron-energy office building on Tammsaare 56, developed in the vicinity of the tsarist army military barracks.  The Head of Kristiine District Administration of Tallinn City, Jaanus Riibe, was invited to give a speech and welcome the project.

Park Tondi Kvartal is a centrally located pulsating and one of the fastest developing districts in Tallinn. The district is known for its tennis yards and a combination of historic buildings and greenery. Roof terraces, bicycle parking and architectural choices are combined in a way that complete a new level of sustainable lifestyle.

By 2024, some 28,000 square meters of living and office space are planned additionally to the quarter’s development project. "In these difficult times, it is important to create new developments in an environmentally conscious way, and it is especially close to my heart to do so here in Tondi, where we renovated the historic Tondi barracks into an office building in 1995," said Urmas Sõõrumaa, Chairman of the US Invest Council. "With the added office buildings, a complete Park Tondi quarter will soon be formed, which is located in a nice location in Tallinn and surrounded by good neighbors."

According to Jaanus Riibe the Head of Kristiine District Administration of Tallinn Municipality, the area of ​​Tondi settlement is currently developing very fast and the completed project will add a lot of added value to the city at large. "This development will also create new jobs in the Kristiine district, and a large number of high-quality, low-energy and modern living and office space will be added to the settlement, which will create good conditions for both home and work," Riibe added.

The nearly zero-energy office building in Tammsaare 56 is distinguished by well-thought-out spatial solutions and additional opportunities that favor movement habits, such as bicycle parking, tennis yards, sports centers in a few minutes walking distance. Parking is mostly on the underground floor of the building, there is a closed bicycle parking lot with clothing and washing facilities. All office spaces will have a balcony, and a terrace will be built on the top floor of the building, overlooking the Forus Sports Center Tondi tennis courts.

The office building will be completed in the beginning of 2023. The architects of Tammsaare 56 office building are HG Arhitektuur and KAMP Arhitektid. To date, 52% of the building has already been rented out to reputable companies doing business in the wider Baltics.

Additional information about Park Tondi residential and business quarter: https://parktondi.ee/tammsaare-tee-56 . The real estate developer and business man Urmas Sõõrumaa is also behind the reputable Rotermanni Quarter in the center of Tallinn, as well as Patarei Marine Fortress complex development in Laeva 5, on the seashores of the capital, which have both received lots of international attention.