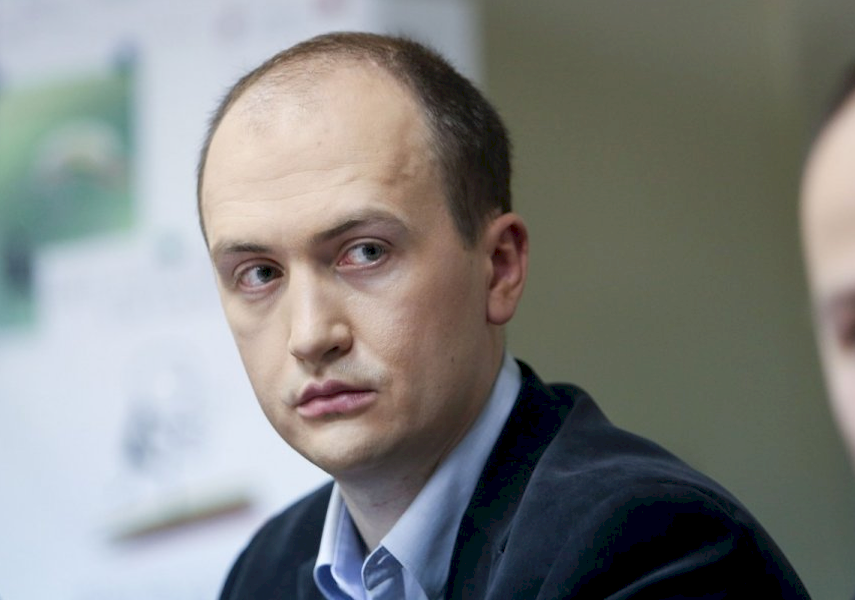 WATCHDOG: Sergejus Muravjovas, the head of the Lithuanian branch of Transparency International

With just 25 years as an independent state, Lithuania’s achievements are astounding. However, they are still plagued by one relic of its Soviet past: widespread corruption. It is still omnipresent and infiltrates all aspects of life.
“The number of people who support anti-corruption initiatives are on the rise, albeit slowly,” Sergejus Muravjovas, the head of the Lithuanian branch of Transparency International, told The Baltic Times.  “(There) remains a lot to be improved in the country in terms of the fight against corruption.”

Well, as we live in a democratic society, people are entitled to approve or disapprove of anything — including our organization. There are obviously many different opinions about our organization and, among them, those reflecting the views you mentioned. I sometimes imagine if there were an international organization — Corruption International, for example, it would perhaps find its proportion of people supporting it. But fortunately for all of us, we have Transparency International and, as I said, there are more people supporting it around the globe. The fact that more Lithuanians find it a necessity (indicates) that Lithuanians are becoming more westernised.

Can you substantiate the claim about support with statistics?

The recent corruption map of Lithuania clearly shows that fewer people are willing to give bribes or kickbacks for any services. A Vilmorus poll conducted in 2014 showed that 69 per cent of respondents believed that giving a bribe helped to solve a problem. It was a 10 per cent drop from the same poll in 2011. In 2014, only 48 per cent of people said they were ready to use bribery in tackling their problems. In comparison, in 2011, the number was higher by 9 per cent, so the understanding of corruption is improving. Slowly, however, I’d say.

Everything is subject to evolution — corruption, too. How has it changed over the last two decades, and how specific is corruption in Lithuania?
I’d say that different forms of corruption are intrinsic to Lithuania. Unfortunately, the Soviet-era syndrome of giving bribes is still very deep rooted in our society, although the picture is becoming more transparent. If you were to speak to our businessmen, you’ll definitely hear of nepotism, which is defined as patronage or favoritism shown on the basis of a family relationship — it’s the same in business and politics. That’s one widespread form of corruption. The good thing is that more and more Lithuanian businessmen, as well as some politicians out there, perceive that it needs to be rooted out.

Let me share with you my personal story. My octogenarian father, who tends to frequent doctors nowadays, tells me that he is only taken care of when he greases the medics’ palms. He insists “all patients he speaks to” do so. It seems to be still a common practice in Lithuanian health care, doesn’t it?

Unfortunately, our analysis shows that patients tend to give bribes to doctors as much as before. Frankly, little has changed over the years on the front. Shamefully, people must do it, or are forced to do it, in order to get medical treatment or a better service. At the same time, we see more people who, perceiving themselves as taxpayers, tend to bristle against the idea of giving bribe for a service they have paid for through taxes.

Do you believe the state itself has legislatively done all it can to fight corruption? Do you find it alarming that heads of local anti-corruption commissions on municipality councils belong to the ruling coalitions?

Indeed, a very good question. Altogether, we all should discuss if such commissions are necessary at all. I believe the supervision of corruption on the municipal level that we have now, ought to be overhauled to the core. Maybe afterwards, we can conclude that they function the way they do now, and that they need to be reformed. Let’s admit it: the commissions have not contributed to reducing corruption in our municipalities. In fact, self-government remains one of the most corrupt fields in the country.

Why has it not been overhauled yet, and why doesn’t the parliament pay attention to it?

The answer is simple: if legislators do not want to pay attention to it, perhaps the situation plays into their hands. Politicians should be asked this question: why do they not want to amend the legislation for the better, and furthermore, why do they not draw up new legislation that would set an example?
I sometimes do not see sense in why some laws are passed if lawmakers know beforehand that the legislation will never be properly enforced — for example, the law on lobbyist activities; it has been effectively defunct since the adoption. Officially, there are several dozens of lobbyists, but the number is way larger, reaching hundreds. Instead of initiating and waiting for amendments of the non-functioning law, politicians could start now declaring the lobbyists. However, very few have done it. All legislation has to be easily traced back to one politician or another, plus the lobbyists behind him.  Today, I have the impression that few want it. The reluctance is equal to me in not wanting to fight corruption.

How do politicians usually distance themselves from lobbyists in Western countries — Scandinavia for example?

In general, in Western societies, politicians are held significantly more accountable for their activities. And they themselves are a lot more self-conscious and mature. This is also in dealing with lobbyists. All high-ranking officials of the European Commission are bound by law to declare all their meetings which involve persons who may be defined as lobbyists. I do not see a reason why it cannot be done in Lithuania. It would definitely serve the fight against corruption. We have the necessary infrastructure and possibilities to have it implemented in Lithuania, too. However, the will to start doing it is what is missing in our country.

The breeding ground for corruption is also municipality-owned companies, whose heads are usually appointed by the party leaders from the ruling coalition. As a rule, the appointees are cronies and fellow party members. Do similar practices exist in the West?

Indeed, the practice you are talking about is widespread and, needless to say, very malign in Lithuania. Often, local municipal companies become a nest for close friends and the most devoted party members of top officials in any local administration. Local parties simply decide among themselves who will direct one municipal company or another. These companies, more often than not, secure a livelihood for an entire network. This kind of nepotism prevents the companies from developing and focusing on business. Operating like this, they only serve a narrow circle of chosen people.
Our first-ever research on the transparency of municipal companies has shown that … most of those surveyed could work much more transparently. Unfortunately, the research revealed that many of them are not implementing basic anti-corruption measures.

I mean they do not have any ethics code of conduct or policy on gifts and so on — at the end of the day, there is much to be done to improve the situation. One of the first things that the municipalities ought to do set a tougher municipal companies’ supervision policy. They should also appoint employees who are not part of the municipality to their boards. Again, it is all about the will — do we want to fight corruption or let it go?

Speaking of the differences of company management here and the West, many municipality or state-owned companies in Lithuania are rather secretive and reluctant to make their records public. Things, however, are improving little by little. I see the appearance of more public data on municipal and state company management and performance. This is a good sign. Maybe someday we will stop questioning whether a person appointed to be in charge of a municipal or state company is some party’s man or not. I believe there is a growing understanding that professionals not affiliated with any party could get the job done best.

The mayor of Druskininkai was embroiled recently in the Aqua SPA scandal, which gave high-ranking politicians access to luxury accommodation and amenities in the center. He has seemingly come out unscathed. Does it surprise you?

No, not at all. The whole story is very bad and epitomises what corruption is about. The fact that our top-tier politicians, often with their spouses, could splash around in luxury not only on weekends, but also on weekdays, shows how deep-rooted the ill practice is. I wonder whether they have ever given any thought to their actions. And if they did, do they think it’s appropriate? But, again, the legislation and public understanding of what is appropriate for politicians, and what is not, should be here to (protect) us from scandals like this.
Author’s note — Last week, Lithuanian President Dalia Grybauskaite submitted a draft bill aimed at curbing shady donations from state and municipality controlled companies, preventing financial waste, and ensuring more transparency.
According to the State Tax Inspectorate, five municipalities received 400,000 euros in support from their own companies over the last two years.
The amendments also stipulate that politicians and political parties cannot receive free services from private companies. According to the draft law, it will only be possible to set up a new company by getting authorization from the Competition Council and proving that the intended service is not already provided, and it does not distort competition.
Whether it will help reign in Lithuania’s giant octopus of corruption still remains to be seen.
in Lithuania remains to be seen.