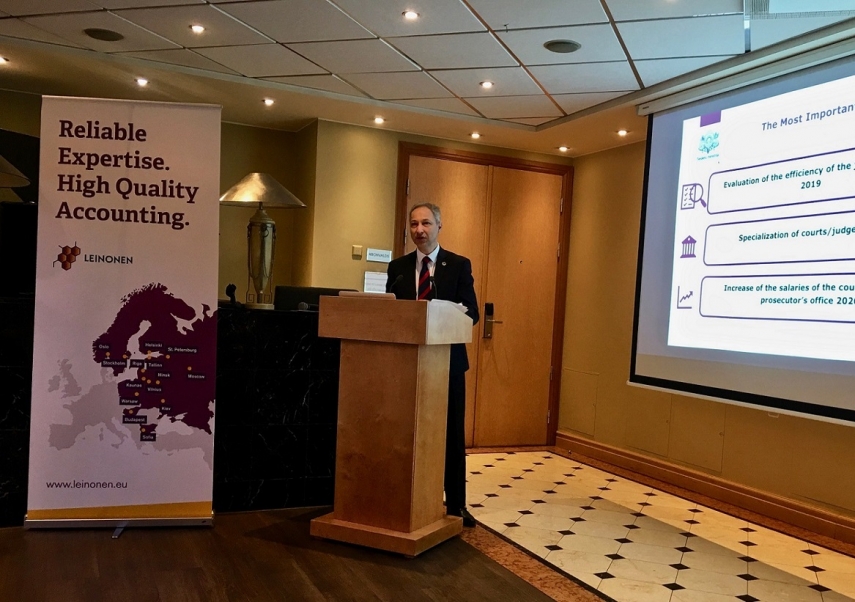 RIGA - Nordic Chambers of Commerce in Latvia during a business luncheon with the newly appointed Latvia’s Minister of Justice and Deputy Prime Minister Jānis Bordāns emphasized the need to pursue reforms in Latvia’s Judicial system directed at increasing its efficiency and strengthening trust in Latvia’s court system. The Business Luncheon took place on March 6 at the Radisson BLU Hotel Rīdzene.

“The so called oligarch talks which were released a few years ago and the recent news about potential corruption schemes at Rīgas Satiksme vividly illustrate the legal nihilism in Latvia. In this context, we invited the new Minister of Justice to outline his planned action to fight corruption, reform the judiciary system and strengthen the rule of Latvia,” said Matīss Kukainis, Member of the Board of the Norwegian Chamber of Commerce in Latvia and a partner at the “Spīgulis & Kukainis” Law Firm. "We invited the Minister of Justice to talk openly about the most urgent and pressing issues in the justice sector, believing that situational awareness, problem identification and full openness would lead to a quicker and more effective solution," added Kukainis, who moderated the Q&A session with Mr. Bordāns.

Responding to the invitation by the Nordic Chambers of Commerce in Latvia, Latvia’s Minister of Justice outlined his intended reforms focusing on transparency, stability and modernization. “Stable legal environment is the basis for economic growth,” said Mr. Bordāns during the presentation. As the key priorities he listed: increasing the court efficiency by organizing specialized courts and strengthening court capacity, raising salaries for court staff and prosecutor’s office, as well as implementing innovative solutions in the court work, including the use of IT and artificial intelligence. The Minister also emphasized the need to ensure effective and efficient pre-trial investigation process and promote better cooperation between investigators, prosecutors and the Court system.

Whereas the representatives of the Nordic Chambers of Commerce in Latvia in their questions to the Minister brought up the widespread culture of impunity in Latvia, protecting investors’ assets in case of insolvency process, and restrictions on purchasing agricultural land by foreign investors.

The foreign investors also inquired about the recently exposed violations at Rīgas Satiksme and the allegations against the Governor of Latvijas Banka Ilmārs Rimšēvičs. The problems in the Latvian Judicial system have been previously addressed by the Foreign Investors Council in Latvia, which at the beginning of this year published their most recent Sentiment Index, summarizing the key
concerns of foreign investors in Latvia, including corruption and shadow economy.

The Business Luncheon with the Minister of Justice was organized by the Norwegian, Swedish, Finnish and Danish Chambers of Commerce in Latvia with the support of Leinonen and HD Forest. More than 60 members of Nordic Chambers of Commerce, several ambassadors and diginataries attended the business luncheon. The four Nordic countries – Sweden, Norway, Denmark and Finland are among the biggest foreign investors in Latvia with investments reaching nearly 1.9 billion EUR, according to Lursoft.