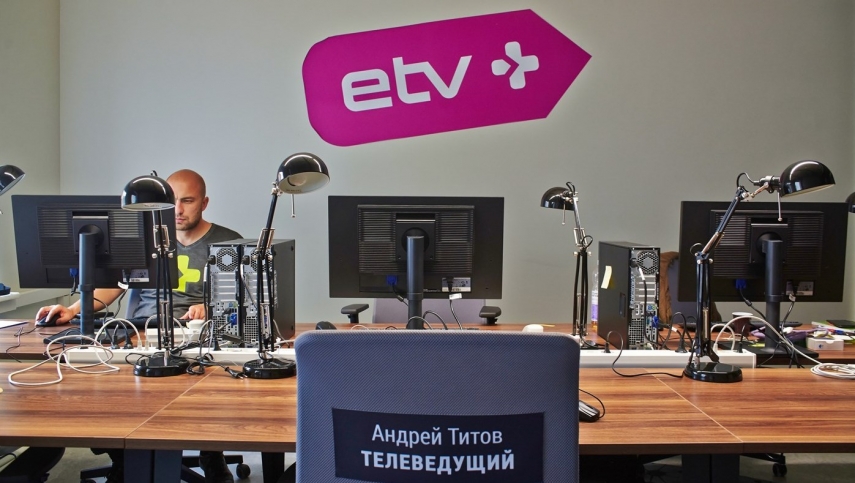 TALLINN - Altogether 294,000 people, most of them ethnic Estonians, watched the Estonian public broadcaster ERR’s new Russian language television channel ETV+ for at least one minute during its first week  on the air, a survey by TNS Emor indicates.

Ethnic Estonian viewers numbered 217,000, making up 25.7 percent of the target audience, and viewers of ethnic backgrounds other than Estonian totaled 77,000, making up 20.7 percent of the target group.
On the average 97,000 people watched ETV+ daily. The new channel had the highest viewer numbers on the first day it went on the air, when it was watched by 120,000 people.

Ainar Ruussaar, member of the management board of ERR, said ETV+ was not a rating project but a long-term mission to make Estonia stronger and healthier and to improve its citizens’ quality of life.
“Therefore we must leave aside emotional musings on voter numbers for now. The things that matter are totally different, namely that ETV+ is an initiative that is written about by media outlets all over the world and spoken about by diplomats in all of Europe. This is not a whim or an adventure – this is a very strong message and an act of good will, which makes all of ERR stronger,” Ruussaar told BNS.

The most popular program of ETV+ during the first week was the entertainment program Your Evening, watched by 125,000 viewers. The other two programs in the top three were the morning program Coffee+ with 67,000 viewers and the evening news with 48,000 viewers.
ERR has pointed out that many people watch the new TV channel online. The website of ETV+ attracted more than 31,000 visitors last week.

ETV+ first went on the air on the morning of Sept. 28. The TNS Emor survey covered the period from Sept. 28 to Oct. 4. The new Russian TV channel of the public broadcaster ERR, ETV+, was watched by more than 119,000 people on its first day of broadcasting on Monday.
Head of the media studies department of ERR Andres Joesaar told BNS that TV measurers of TNS Emor showed that more than 119,000 people watched the first broadcasting day of ETV+. “It is a very decent and gratifying number,” Joesaar said.

Member of the management board of ERR Ainar Ruussaar told BNS that feedback to the new channel has so far been positive and they had no technical failures.
All ETV+ shows are also translated into Estonian.