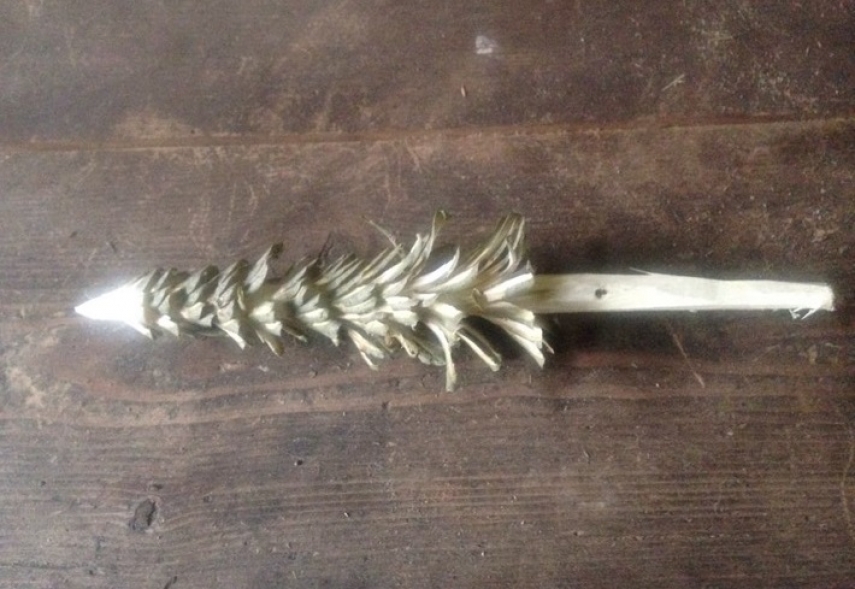 This exhibition is about scale and excess. It is about how much we as humans actually need. In present environment we are still taught to consume, however if we had to make the things we need by ourselves, we would perceive them by completely different measures of time and labor. This exhibition presents the most recent installation by Laura Garbštienė, which discusses the role of ecology, consumerism, as well as human role in addressing the issues and problems which are particularly relevant in today's world. Objects in the exhibition are rather small and insignificant at first glance. But perhaps they reflect our real need which we are unable to realize due to the excess of stuff around us.

In this exhibition particular attention is paid to the process – here it becomes a unit of measure. The artist therefore encourages to delve into action by inviting to the workshops of knife making, knife sharpening and wood carving, led by experts in the field. It is important to note that these workshops are designed not for object making, but for initiating the process. In this case it is the process that becomes the most important element in the relationship between us and objects. According to philosopher and anthropologist Gregory Bateson, the most important is what is in between, the relationship between the two, what lies between them. By creating this installation the artist is rephrasing this statement in the context of her exhibition as follows: the processes that surround objects are the most important.

Laura Garbštienė studied at Vilnius Academy of Arts. Since 2002 she has been creating videos, installations, performances exploring such themes as language experimentation, changes in meaning of words, accident, subjectivity. Her practice is based on intense observation of the self, the routine and the environment. Since 2014 her work has taken a turn towards contemplation of natural phenomena, ecological consciousness, domestic and rural natural farming processes going extinct.

The artist is currently based in Marcinkonys where she is organising various events, workshops, symposiums. She is also setting up exhibiting space and artist residencies in Marcinkonys Railway station building.

Exhibition will be followed by knife making, knife sharpening and wood carving workshops, lecture on eco-philosophy and film screening by Laura Garbštienė. The events will be announced separately.