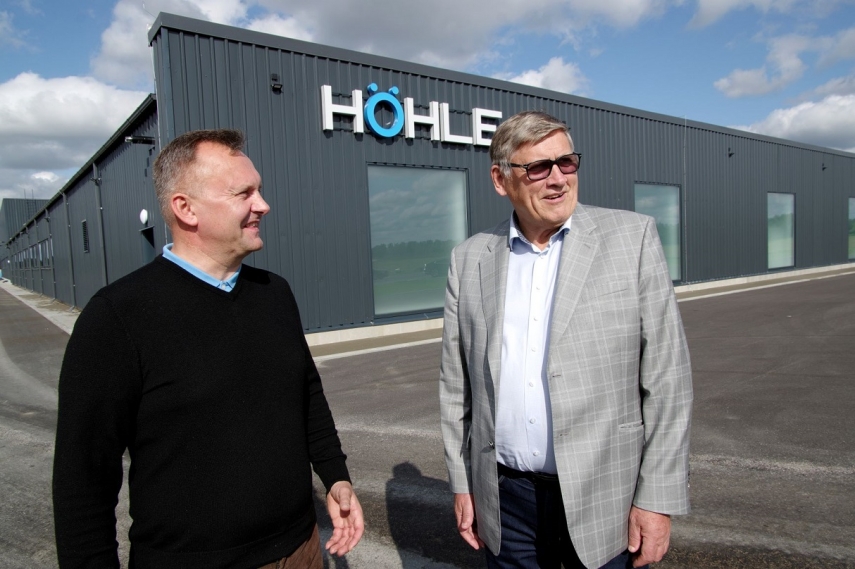 Höhle OÜ, a plastic microduct manufacturing company unique in Estonia, opened its new factory in Lõiuse village in Rapla county. The factory produces over 200 km of micro ducts per day, which go to the domestic market as well as to 12 European countries. The total investment for the factory was over 4 million euros.

Founded in 2016, Höhle OÜ is a microduct manufacturer for fiber optical cables. The activity started three years ago in Jaluse village, Juuru municipality, Rapla County. However, with business expanding came the need for a bigger space and a new factory was built in Lõiuse within a year.

The modern production building includes refurbished farm buildings and new extension with total space of more than 6,700 m2 and 1.5 hectares of paved storage areas, which provide the plant with extensive development opportunities. Kristiina Hussar is the author of the architectural solution for the new factory building on Torupõllu property, designed and built by Mapri Ehitus OÜ. Storage areas and roads were built by Tallinna Teede AS.

The Höhle factory operates around the clock. The largest consumer of microducts in Estonia is the Broadband Development Foundation's EstWin project. Its clients include Telia, Elisa, Elektrilevi and other companies establishing high-speed Internet in Estonia.

Currently, Höhle employs 15 locals and will double the number of employees following the planned expansion. Höhle's sales have increased to more than three million euros in three years. This year's turnover is expected to exceed four million euros, of which more than two-thirds is from export. Major export countries include Norway, Sweden, Finland, Denmark, but also Germany, Greece, and Spain.

“Our employees are mostly local people,” says Toomas Koobas, CEO of the company. "That's why our motto is – we run international business with local people."

"The microduct market has a perspective both in Estonia and beyond its borders," says Tõnis Kaasik, member of the board of the Net Systems Group, a circular economy group. "Looking forward we see opportunities for development and cooperation with other companies in the Group."

The company was recognized by the Raplamaa Center for Development and Entrepreneurship and the Association of Local Authorities of Raplamaa as “Business Deed of the Year 2018” in May.

Höhle OÜ is owned by Toomas Koobas, the founder and CEO of the company, and Tõnis Kaasik through its Net Systems Group (other manufacturing companies: EcoMetal AS, in Sillamäe and WeeRec OÜ in Kiiu).