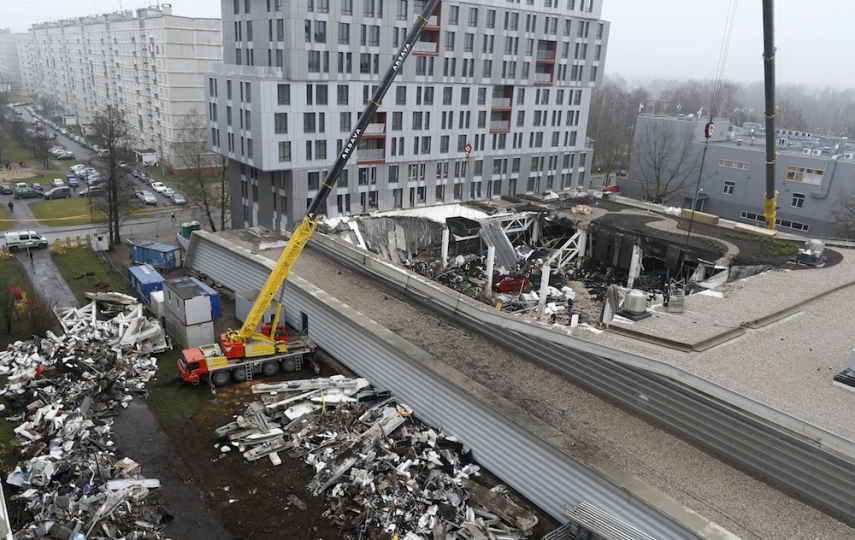 The site of the Riga roof collapse [Image: pressherald.com]

Saturday November 21, saw hundreds of people take part in a memorial service and the unveiling of a temporary memorial to the victims who died after the roof of a Maxima supermarket collapsed in Riga.

According to police estimates, some 500 people attended the commemorative events in Riga's Zolitude suburb.

The temporary memorial consists of two glass structures on a concrete foundation. The memorial was lit at the moment when two years ago the roof of the supermarket caved in.

Moments later, fire sirens were sounded in remembrance of the three rescuers who lost their lives saving people that had been buried under the rubble.

Two years after the disaster, a fence still encloses the scene of the deadly accident and the future of an unfinished apartment house adjacent to the collapsed supermarket building remains unclear.

As a result, a temporary memorial had been erected at the supermarket's former parking lot.

People kept coming to the scene of the accident throughout the day, lighting candles and laying flowers.

A book about the tragic event, "Remember Zolitude" was also published on the second anniversary of the store collapse disaster.

Latvian President Raimonds Vejonis who also attended the commemorative events in Zolitude on Saturday evening, admitted that the tragedy still had not eradicated a careless attitude to work. “Much has been done in terms of legislation, but in real life there is still too much irresponsibility,” the president said.

"The tragedy in Zolitude showed that it was caused by the ignoring of laws, carelessness on the part of the people in charge of managing the project, supervising or carrying out the construction works and those who did not tell people to leave the premises [when the alarm sounded].

“In my opinion, this carelessness towards work is still characteristic of us and it has to be overcome,” he continued.