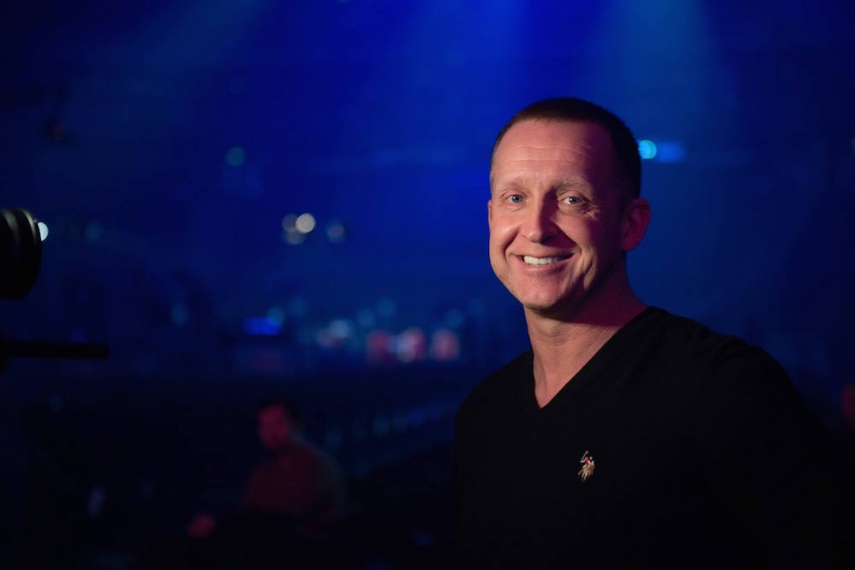 As Eurovision fever escalates all over Europe, Baltic managers and producers are preparing their artists for the huge spectacle that will take place on 10th – 14th May in the Stockholm Globe.

Amongst the Baltic hopefuls is Vilnius based  Martynas Tyla, who is the leading music entrepreneur in Lithuania.  It is seldom that one hears about these behind the scenes executives, especially in countries like Estonia, Latvia and Lithuania. They are relatively unknown to the rest of Europe, but without them the popular music industry of the Baltic Nations would not and
could not exist.

Martynas Tyla is the most successful artist manager in Lithuania and from his impressive record, one can only  draw the conclusion that he is  one of the best in his genre in the Baltic States.

Tyla who started his career as a sportsman was a professional swimmer winning medals until he found himself managing artists and singers after having come into contact with them through his job as a DJ.

One thing led to another and Martynas Tyla has become the power engine responsible for providing Lithuania with some of the best artists the country has ever known. Over the years he has managed the Lithuanian megastar  SEL and some of the names on his impressive CV are Exem, Lemon Joy, RSA, Atlanta, Pagalveles, Sasha Song, Monika Linkyte, Empti, Giedre and this year’s contestant in the Eurovision Song Contest, Donny Montell, known locally by his real name, Donatas Montvydas.

The Lithuanian music business has in the past been quite unorganised and somewhat amateurish when compared to that of other countries. When I first came to the Baltic States in the late 1990’s it was like a wild musical jungle where would be managers and wannabe producers were shooting from the hip and  in the process were knocking each other down and totally stopping progress. But  around the middle of this century’s first ten years of independence, things started to get better in Lithuania and a lot of this is accredited to Martynas Tyla and his visions for Lithuanian artists and Lithuanian music.

In just the last three years he has revolutionised the whole Lithuanian music business to be what it is today. Tyla is overly modest when he insists on sharing the credits for his idea of starting a Lithuanian Grammy’s Gala (M.A.M.A. awards) with half a dozen other people, but in fact everyone in Lithuania knows that he is the brain behind that whole project which is today a huge success stimulating the Lithuanian music market and creating jobs within the music industry for hundreds of people.

As for Lithuania’s participation in the Eurovision Song Contest,  it has improved tremendously since Martynas Tyla came along.

Now as he is on the verge of what appears to be a major success with his artist Donny Montell.

The Baltic Times asked him a few questions:

The Baltic Times: How long have you been an artist manager? How did you get into the music industry?

Martynas Tula: It was 23 years ago in 1993 when I was DJ-ing in discos. That led to me getting the possibilities to organize larger events. Obviously this resulted in my building relationships with performing artists. Then, as a natural result of all that, I started to manage artists and bands, trying to protect their interests as well as trying to find ways for them to earn money.

TBT: How many times have you been involved in Eurovision? Which years? Which artists? And what were the results?

MT: Sasha Song was the first artist I managed in Eurovision. We went to the final in Moscow. He qualified to the final and ended up in 23rd place.  Then there was Donny Montell who in 2012 won the Lithuanian domestic contest by a landslide victory and gave an excellent performance that took him into the final where he finished up  at 14th place.  And last year I managed a duo
consisting of Vaidas Baumila and Monika Linkytė who also reached the final and finished in 18th place.

TBT: How do you think it will go for Lithuania in 2016 contest with Donny Montell?

MT: I’m pretty sure, that his song ‘I’ve been waiting for this night’ is one of the strongest songs in ESC 2016. It sounds very professional and has an international feeling around the whole production. I note that there are less than five songs in this year’s contest that are of the same quality as our song, and there doesn’t really seem to be a clear favourite amongst them, so I think it looks good for us.

TBT: How popular is Donny Montell in Lithuania?

MT: I would say, he is the artist who is getting bigger and bigger and becoming the best performer in Lithuania. This is endorsed by the huge numbers of fans who are constantly filling arenas when his concerts are held.  He is  an extremely creative and highly talented  artist, and like myself, he is a real workaholic. After concerts he really concentrates on his fans and meets them personally, often spending a couple of hours just signing autographs. He is always invited to perform at the biggest music events in Lithuania. Donny has won many awards. Besides he has around 100 000 followers on Facebook. That’s a very high number for a small country like
Lithuania!

TBT: What do you think about the selection process for the Eurovision songs by Lithuanian national TV?

MT: It’s a difficult process with some positive and some negative elements. We have many semi finals at each of which artists sing their songs  over and over again week after week. But I think it really would be possible to select the artist and song to represent Lithuania by just having about four semi finals.  On the other hand the current system provides for less known artists to get a platform and be noticed by the public. By holding many semi finals Lithuania stimulates it’s own music industry by providing this short term promotion for the newer and less known artists.  However for experienced artists it is perhaps a little monotonous to sing their songs so
many times week after week.

TBT: What do you think about the Estonian and Latvian songs in this year’s Eurovision Contest?

MT: The Latvians are repeating what they did last year by trying to repeat the successful formula of Aminata. If this works for them in Stockholm we will know shortly. The Estonians have as usual, their own unique signature and they are presenting an authentic artist, but comparing this year’s entry with  previous years, I would say, Estonia has had better candidates and better songs in the past.

TBT: Latvia and Estonia have both won the Eurovision. Why do you think Lithuania has never won?

MT: The answer to that question is very simple: Lithuania has so far not had a song good enough to win the contest! That’s it – No other reason!

TBT: Who can potentially win Eurovision for Lithuania and why?

MT: Donny Montell. He is a world class act! He has perfect vocals, he is a great dancer, he is handsome. And – he is not a product, but a creator himself, he works hard and gets great satisfaction from his work. Now he has a burning target - to win the Eurovision Song Contest.

TBT: Is there a big interest for Eurovision in Lithuania?

MT: Oh yes! This year it was the most watched selection process from the last seven years. It has had an amazingly large audience - about 1,3 million people. 46 percent more than last year. This shows that interest just seems to grow and grow every year.

TBT: Is there much influence of Russian music in Lithuania?

MT: If you had asked me that question five years ago, I would have said, that Russian music still has a little influence. But now it has almost faded away. The whole industry is orientated towards the West, and the musical youth of Lithuania are looking ahead, searching for publishers and promoters, and trying to find ways to get themselves into Western markets.

TBT: Did you create the M.A.M.A. awards in Lithuania? How did you do that? Is it successful?

MT: It was not I alone. It was the initiative of seven people, all active in the domestic show business industry. We had a vision of how to make Lithuanian music stronger and to let it grow in the local market. And we got very successful feedback. This year a ceremony of music awards (M.A.M.A,) was broadcasted live on TV3, and was watched by a half of the Lithuanian population. Statistics for the last five years reveal that album record sales increased more than three times. Lithuanian artists are finally  giving  concerts in the biggest arenas and successfully filling these with thousands of people.These facts are the best motivation. I think the result of this
initiative made us pioneers amongst the  Baltic nations and today, the music industry of Lithuania allows many professionals to live really comfortably and continue to create good music.

The Estonian entry will be performed by Juri Poostman  in the first semi-final on 10th May.

The final of the Eurovision will be broadcasted on Saturday 14th May.