Marine Art of the 19th Century 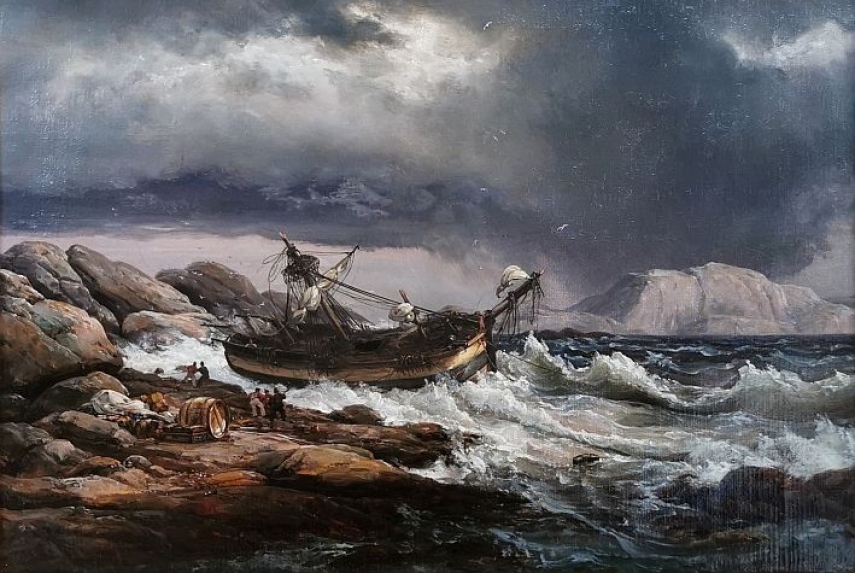 An exhibition Marine Art of the 19th Century will be on view in the Bosse Hall at the Art Museum RIGA BOURSE in Riga (Doma laukums 6) from 5 October 2019 to 5 January 2020, inviting to discover the seascapes from the Latvian National Museum of Art’s collection, painted by artists from Germany, Holland, France, Norway, and Italy.

The marine marks a landscape painting genre, where the sea is portrayed in the most diverse expressions of this fluid element. The pioneers of the sea landscape genre in the 17th century were painters from Holland, and they later inspired many generations of  artists. The Hollanders created several marine types, depicting the sea during various stages of the day and night, showing it agitated by storms or in a calm state, portraying sea battles and views of ports. In Holland, the tradition of the grand masters was also continued by 19th century seascape artists like Johannes Christian Schotel (1787–1838) and David Kleyne (1754–1805), whose works can be seen in the exhibition.

The paintings on view feature popular 19th century sea landscape motifs: along with generalized scenes of storms, the artists also enthusiastically painted romantic landscapes with cliffs in the sunset. Variations on the coast of the Bay of Naples, with the outline of Vesuvius or the Isle of Capri, were favoured motifs. During this period, artists also increasingly focused on other geographic regions, especially the local landscape.

An intensified interest in the sea in art, and a new interpretation of this theme appeared in the era of Romanticism, when artists associated phenomena in nature, particularly the changing surfaces of water, with the reflection of their emotions. In this way, the stormy sea with its sinking ships in the compositions of German artist Carl Friedrich Schulz (1796–1866) and Norwegian painter Johann Christian Clausen Dahl (1788–1857) has become a metaphor for people’s resistance to the setbacks of life.

Whereas in the late 19th century influenced by the Impressionist style, artists used a rich palette of colours, attempting to achieve the effects of light and the vibrations of the sea air on the canvas, which visitors will see in the painting Landscape of Naples by Giuseppe Carelli (1858–1921).

The magic of indomitable water elements has fascinated people in all eras, that is why the marines from the 19th century still continue to attract viewers and collectors of art.

Dutch painters and other Old Masters were specifically studied, and their works were copied by the outstanding Armenian origin Russian art school artist Ivan Aivazovsky (Иван Константинович Айвазовский / Ованнес Айвазян, 1817–1900) during his learning process. This year, paintings by Aivazovsky can be viewed at the exhibition Metaphysics of Light in the Great Hall of the Art Museum RIGA BOURSE.