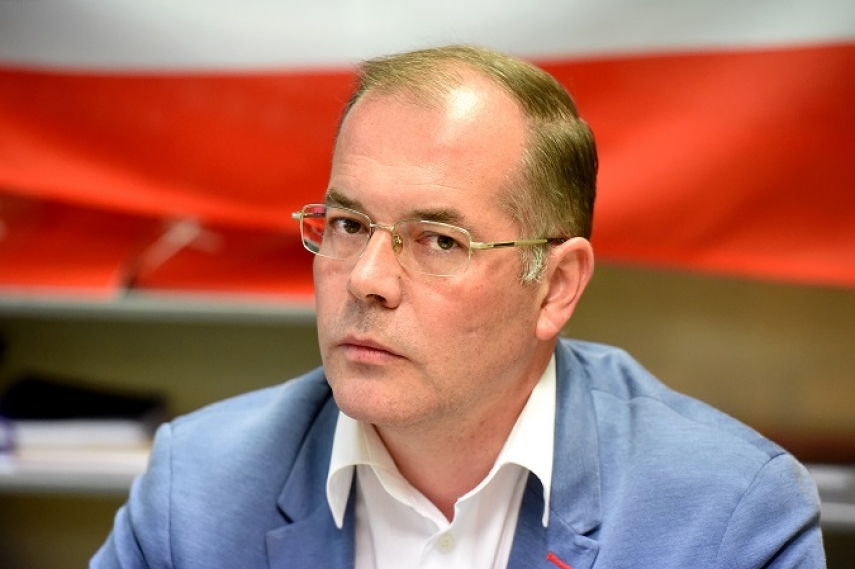 RIGA - If Harmony party acknowledges it has made a mistake by not defending ethnic minority schools, Latvia’s Russian Union does not see obstacles to cooperation with this party in the next Saeima, European Parliament member Andrejs Mamikins said at a news conference today.

“If Harmony admits its mistake, politically I do not see any reasons not to lend them a hand and cooperate with anyone who is “for” on this pressing issue,” the politician said. Tatjana Zdanoka, the leader of Latvia’s Russian Union, said that she did not deem it possible to work in one coalition with the Education and Science Ministry’s former official Evija Papule and that the Russian Union found Harmony’s decision to nominate her as candidate for the next education and science minister shocking.

Mamikins said, however, that Latvia’s Russian Union has a very good chances of forming a faction in the next Saeima that would be fighting for minorities’ rights, adding that there is always a risk to lose any competition, including the parliamentary election, but that he would not be ashamed to lose.

Mamikins said that his decision to run in the coming Saeima election on the Russian Union’s ticket was not easy but that the moment he realized that the ruling coalition was going ahead with the language reform in minority schools was a turning point. “For me, it was the last straw. It takes resolve to make such a decision. I will work for this election campaign and help the party make sure there is a Saeima faction representing national minorities. I believe there is a chance of success,” the politician said.

Zdanoka voiced satisfaction about Mamikins’ decision to accept the offer to run in Latvia’s 2018 general election on the Russian Union ticket and said Mamikins would be the party’s lead candidate in the Riga electoral district and candidate for Latvia’s next prime minister. “Since as a MEP Mamikins took part in many actions in support of minorities’ rights it is logical for me to top our ticket,” Zdanoka said.

Mamikins has not joined Latvia’s Russian Union, but Zdanoka indicated that the party’s statutes allow nominating candidates that are not the party’s members and that the party has had such people on its ticket also in the past. Mamikins said leaving or joining a political party was a mere formality he did not care much about. He also promised to renounce his MEP’s mandate if he is elected to the Latvian parliament.

Asked about the program of Latvia’s Russian Union, Mamikins said the party had a vision of how to develop good neighborly relations with Russia and Belarus, as well as social democratic ideas for the Latvian economy and people’s social protection.

As reported, although the Constitutional Court recently ruled to keep in place the restrictions on participation of Soviet and Communist activists in the elections, Zdanoka is determined to run in this year’s Saeima election as her party’s candidate number one in the Vidzeme constituency.

The Constitutional Court rejected Zdanoka's request for lifting the restrictions but noted that the effective law provided a mechanism for individual review of the candidates. The Central Election Commission checking the eligibility of the candidates will have to determine not only whether there is a court ruling confirming the person's active participation in the Soviet and Communist organization but also whether the particular individual and his or her actions still represented a threat to the Latvian state and the principles of a democratic rule-of-the-law country, the Constitutional Court said.

The Latvian Russian Union said in a statement to the press that, as the Constitutional Court ruling did not amount to "a categorical ban", it will be up to the Central Election Commission to decide whether to allow Zdanoka to run in the elections.