Lunch With An Information Warrior 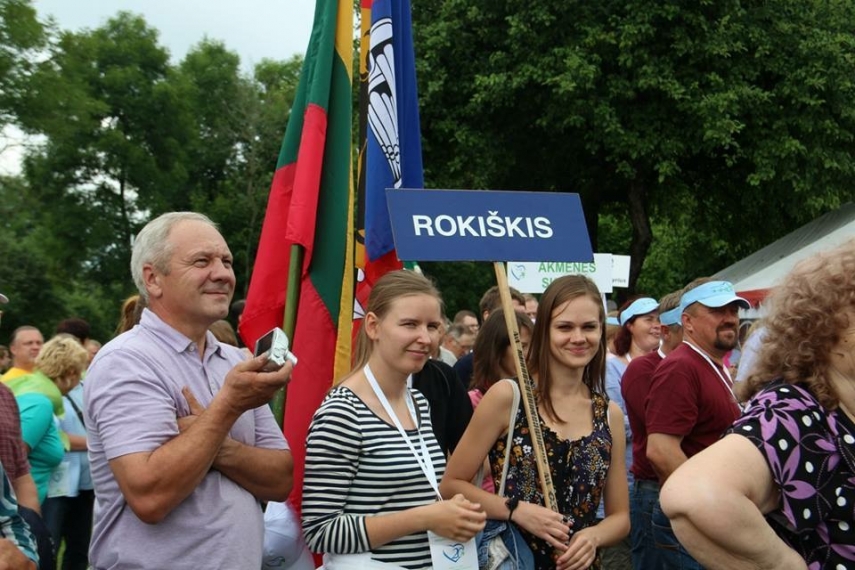 Of course I agree with President Dalia Grybauskaite,” replies my lunch companion. “The reality is that we are under attack from Russia, and the reality is not good.”

The view from the window of our meeting place, a restaurant opposite Cathedral Square in central Vilnius, gives the impression, however, that nothing is wrong.

In fact, the atmosphere in the Lithuanian capital is tranquil; Vilnius is a relaxing place to be at the back end of May and people seem neither rushed nor flustered.

But the atmosphere online is much more fraught with tension. My lunch companion is Rokiskis Rabinovicius, a renowned independent Lithuanian blogger and a member of Lithuania’s expanding online resistance against the increasing level of web-based, Kremlin-fuelled propaganda aimed at the country.

The Lithuanian President has consistently warned that Russia is spreading disinformation throughout Lithuania in order to undermine its sovereignty.

What Grybauskaite has not been able to do, however, has been to explain precisely how this country of three-million people is under attack from Russia.

Rabinovicius went some way to elaborate on the head of state’s soundbites.

“Lithuania has actually been under attack on the Internet for several years now,” he explained to The Baltic Times. “The Kremlin has created some groups which are supposed to not only work online, but also work in real life.

“On one hand, they use the Internet and Facebook to spread their propaganda, and on the other hand, they organise some meetings and protests against the “fascist” member states of the European Union and the United States.

And in a throwback to the Soviet era vocabulary from the height of the Cold War, “fascist”, (see; “anti-Kremlin”), is one of the key-terms that has crept its way back into Kremlin rhetoric.

The word is also an integral part to its simple propaganda narrative - Kremlin good, the European Union, NATO and the United States bad.

Using this simple method, the Kremlin has created a parallel world through taking facts and distorting them to their perceived reality.

Echoing Rabinovicius’ comments on how the Kremlin creates its parallel world of information echo the thoughts of UK-born Russian TV producer. Peter Pomerantsev.

in a ‘Long Read’ feature written for the Guardian in April 2015, Pomerantsev refers to a Russian-language manual published in 2011 called Information-Psychological War Operations: A Short Encyclopedia and Reference Guide.

Pomerantsev pointed out that in “normal war, victory is a case of yes or no; in an information war it can be partial. [An] information war is supple, you can never predict the angle of instruments of an attack.”

However, the manual suggests a broader theory on the current state of information warfare: the information war is now less about methods of persuasion and more about “influencing social relations” or rather entering the psychosphere - influencing the population via an “invisible radiation” [so] “it doesn’t even feel it is being acted upon. The state [then] doesn’t switch on its self-defence mechanisms.”

How does it achieve this? Operational deception, disinformation, imitation and through TV and radio broadcasting.

Its emphasis on the psychosphere is how the Kremlin’s approach to information warfare differs to the West. It treats it as a main theatre of conflict.

The distribution of information is no longer supplementary to a physical struggle or military conflict, instead, it has, in the eyes of the Kremlin, become its own entity.

As the encyclopedia concludes: “information war … is in many places replacing standard war.”

Fast forward to the the Lennart Meri conference in Tallinn in April 2015. Pomarantsev adds why he believes the Kremlin continues to distort facts through its own narrative.

“They, [the Kremlin] want an endless war of narratives because it’s a distraction of what is actually going on [in Russia].

He went on to suggest society Putin’s Russia is a “society of spectacle” that paves the way for the creation of stories based around pure fiction and non-historical accuracy.

For example, NATO’s increased presence in Eastern Europe following the Russian Federation’s annexation of Crimea in March 2014 is a threat to Russia’s borders.

Meanwhile, Grybauskaite’s criticisms of actions taken by the Russian government are quite clearly the words of a fascist leader.

Then there is the EU and its tolerant attitude towards homosexuality - a clear sign that the union aims to spread homosexuality and subsequently, will threaten one of the underpinnings of Putin’s Russia, the traditional family.”

From Pomarantsev’s perspective, the future of the information war between an increasingly separated West and Putin’s Russia, is a battle with no clear winner. The West relies on narratives with correct historical backgrounds.

Those of the Kremlin do not.

Skip back to the conversation in central Vilnius, and Rabinovicius’ prediction for the outcome of the information war with Russia is similarly unclear.

There is no clear decision on who would win and who would lose. Distortion.
“It’s not easy to fight their propaganda, especially in the Baltic States.

Lots of media outlets are not in a very good financial situation, and if the Kremlin offers them money - and the Kremlin has a huge budget -  to spread this propaganda, they’ll do it.

“For example, if you have a portal and you’re faced with the choice of the portal going bankrupt or getting money from Russia, well…” he trails off and points to how the Kremlin’s ‘Troll Army’ - a term coined for bloggers who are paid by the Kremlin to distort facts and promote its official line through Western forums and portals.

According to a former employee of one of the Kremlin’s Troll Farms located in a St. Petersburg suburb, The average employee or ‘Kremlinbot,’ has around six Facebook user accounts to themselves, and on a regular working day is required to make three daily posts and discuss the day’s news in the targeted news groups at least twice a day.

By the end of their first month in employment, they are expected to have won 500 subscribers. On Twitter, the bloggers are expected to manage 10 accounts with up to 2,000 followers and tweet 50 times a day.

“They use the same technology that has been used by spammers for many years,” explained Rabinovicius. “They can generate lots of comments automatically or semi-automatically.

“They have software which can be programmed to generate new messages every time, and every time these messages look different, because they have an algorithm which specially generates some kind of propaganda message.
“In terms of content, the message says the same thing every time, just in a different way.”

How, then, can Lithuania fight the Kremlin’s propaganda strategy?
“For Lithuania it is very hard, because we have propaganda from the Kremlin which is funded by a budget tenfold the size of ours.

“We couldn’t really do anything in the ‘normal’ way of fighting back,” said Rabinovicius in a clear nod to the Lithuanian Television and Radio Commission’s decision to cancel the transmission of Russian-language T.V. channel RTR Planeta for three months - a move that came into effect in April 2015.

“I can’t say it was the best decision to take. It was a hard decision, but you have to be inventive with your counter attack, so that means cancelling channels if necessary. It’s not effective, but you can’t sit and do nothing.

“People can also do something as simple as reporting the Kremlinbots.”

The final question to Rabinovicius is whether he feels Russia will invade the Baltic States in the same way it invaded East Ukraine, by primarily destabilising the situation with propaganda from a parallel reality, then using unmarked military personnel or ‘Little Green Men’ to cause civil disruption.

“In Ukraine, we saw exactly the same thing as what’s happening to Lithuania now,” he continues.

“I can’t say whether the reality [of invasion] is real or not, but we can see signs of preparation for it. So, we should do something about it. We’re making more investments into weapons and the armed forces.

In terms of the investment, in 2015, the Lithuanian Ministry of National Defence opened a National Cyber Security Centre at the cost of 928,000 euros.

Speaking to the Baltic Times, a spokesperson revealed counter-blogging is “not part of of the cyber defence strategy of Lithuania’s Ministry of National Defence,” and the centre would focus on being part of the national defence system, prevent cyber attacks and provide assistance and solutions in the event thereof.

Of the MoD’s budget, it spends around 10 percent on defence CIS and the development of IT infrastructure.

Back to lunch, and Rabinovicius concludes: “there is something happening…”.

In the current information war, however, that next “something” still remains unclear to both Lithuania and the Kremlin.