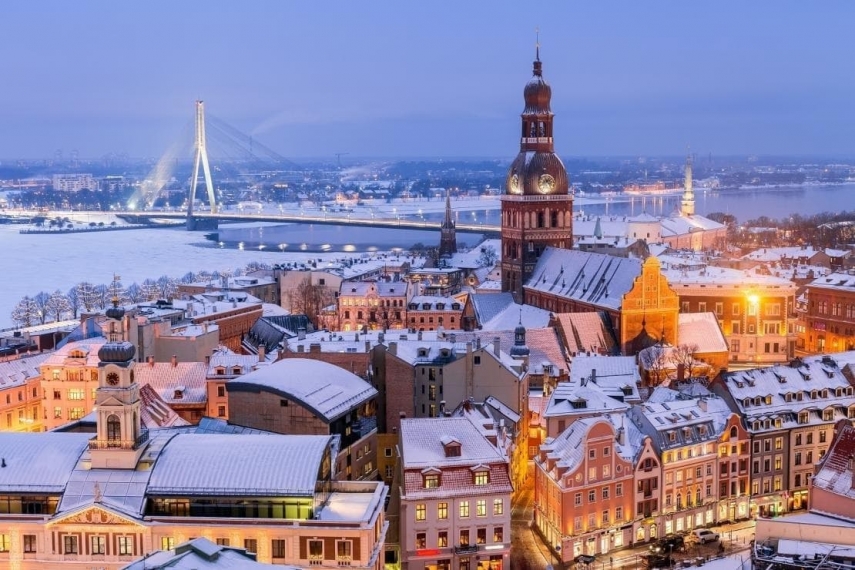 The hedonistic party venues of its wonderfully Gothic and Art Deco capital, Riga, or the lively beach strips of Jurmala, just a few miles away, have made Latvia famous. Admittedly, that is what brings most tourists to this country–the promise of a good time. However, as with most countries, beneath the surface, Latvia hides its real treasure for those who dare to go looking.

In this article, we hope to acquaint you with fair Latvia and all that this beautiful country has to offer so that you know what to focus on when you edit a video with Movavi.

Riga is undoubtedly one of the Baltic's greatest metropolitan jewels and a must-see for any first-time visitor. It spans the Daugava River on the country's northern borders, with a labyrinthine Old Town regarded as one of Europe's most beautiful.

The dagger-like spires of the enormous St Peter's Church tower over the cobblestone streets, while the famously restored House of the Blackheads sits elegantly after the upheaval of Soviet dominance. Art Nouveau dominates the city's outskirts, with masterpieces lining Alberta street.

Kemeri National Park is home to a large number of wild species. There are plenty of lush green trees throughout the entire area. A day excursion to this location can be an excellent option for guests. The sunrise is easily observed if you travel to this location, and promises to make your day–no pun intended.

The park provides a fantastic opportunity to learn something new about the natural wildlife we share the planet with. It encompasses a great expanse of natural beauty and variety. According to legend, the park has the longest area. As a result, this location is extremely significant.

Liepaja, which was briefly the capital of Latvia during the First World War, is a city that is deeply divided. The traditional center of the city occupies one-half of the city. Karosta is the name given to the northern portion of the city, which was originally a top-secret Russian military outpost. As a result, depending on where you are in the city, the architecture of Liepaja differs significantly.

The magnificent white sand beaches of Liepaja draw the vast majority of visitors. Even though Vecliepaja and Dienvidrietumi are the most popular beaches in the area, neither of them is overcrowded.

With a river running directly through the middle of the little town of Kuldiga and down its streets, this village has earned the nickname "Latvian Venice." The most popular attraction, however, is Europe's widest waterfall, which attracts the majority of visitors. The waterfall, known as Venta, is a whopping 240 meters in width, making it the largest in the world.

The salmon leap over the waterfall in the spring, where villagers catch the fish in midair in a stunning display. You can also take in the beauty of the brick bridge that spans the waterfall. It was severely damaged during World War II, but most of it has survived to the present day.

Cesis, located in the Central Vidzeme Upland, is one of the country's oldest towns and is considered to be one of the oldest in Europe. The Old Town is a must-see, and the cobblestone streets set the tone for a quaint and delightful journey of this historic district. Cesis also features two castles that stand side by side and are quite spectacular.

A beautiful wide and sandy beach where you can spend valuable time with your friends and family is a stone’s throw away. This is the location where you can participate in a variety of outdoor activities. It is a popular tourist destination, and a cow saddle may be found here. The water at this beach is a brilliant shade of blue. It is considered to be one of the cleanest beaches in the country. A brisk walk from the center of town will take you there quickly.

Latvia has many palaces, and Rundale Palace is among the most stunning. The Dukes of Courland commissioned the Baroque structure in the 18th century. The palace was built with the help of sculptors and artists from Germany and Italy, and the expensive details remain a feature. You may view a fully restored duchess suite, see Gilt Hall, and take a tour around the Great Gallery.

The Livonian Order came first to Bauska and defended the little islets that sit washed over by the tree-fringed channels near the Lielupe River's mouth. Then came the dukes of Courland and the Russian imperial tsars, who built a new stronghold here, with its peculiar whitewashed walls and red-tiled roofs.

While famous for its rich militaristic history, Bauska has a delightful backwater character, with riverways bordered with ad hoc allotments and farmlands, shaky suspension bridges, and a pretty market square filled with local life.

Araisi is an ancient city located just outside of the castle-topped town of Cesis. Here, you can visit the country's most visited and greatest open-air museum, which portrays the lives of early Middle Age Baltic tribes that lived here on the lake banks in timber lean-tos and wooden huts.

The town of Ogre, located only down the Daugava River's path into the heart of Latvia, has a history reaching back to the early 1200s. It's a great place to discover stories of regional tyranny in the town museum and memorials to victims of communist rule.

Latvia is a beautiful country, and well worth the decision to learn how to use Shotcut, Lightworks, FXHome or any other video editing software because whatever you end up shooting here will be as good as gold. Just make sure to comply with covid regulations and stay safe!