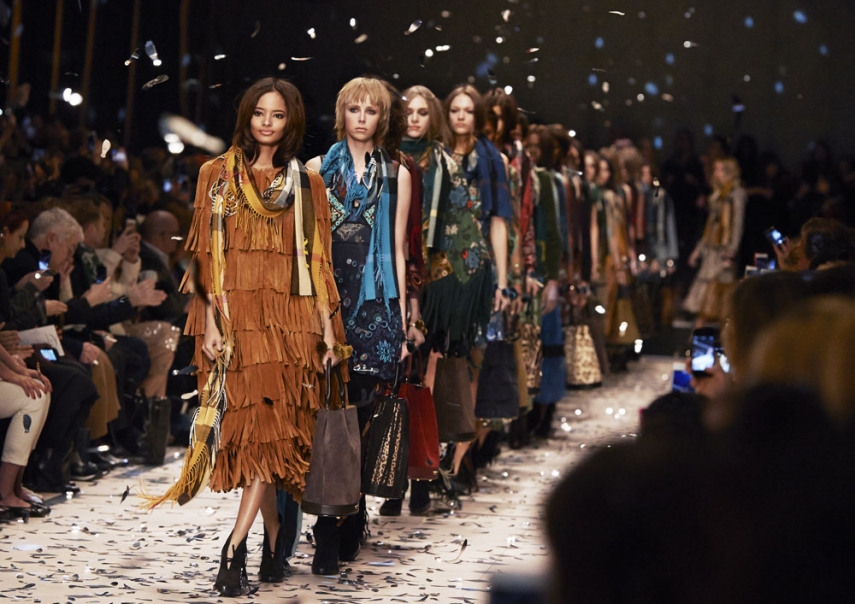 The fashion industry is one of the United Kingdom’s biggest industries, even exceeding car manufacturing. The 2015 London Fashion Week, organized by the British Fashion Council, which took place in February,  is an invitation-only event restricted to trade, journalists and photographers. LFW aims to put British fashion on the international stage. The fashion industry makes, according to the British Fashion Council, a 26 billion pound (35.5 billion euros) direct contribution to the UK economy, and is one of the country’s biggest exports, both culturally and financially.

Since the first event took place in 1984, LFW has developed into one of the highest profile fashion events in the world; it now ranks alongside New York, Milan, and Paris,  and is considered an international catwalk influencer. But according to Maurice Mullen, the head of Fashion and Luxury  at the London Evening Standard, said to The Baltic Times,  ’’It wasn’t always like this,  London used to be  passed by, with the industry looking to the big three fashion capitals of New York, Milan, and Paris.  LFW has firmly put London and British fashion onto the global stage.’’

The official LFW schedule consisted of 60 catwalk shows. The English model, actress, singer, and author Naomi Campbell opened the week with her Fashion for Relief runway, which drew a brilliant array of celebrities to walk down the catwalk in support of charitable causes. But the most star-studded and glamourous event of the five days took place at Kensington Gardens, where top names in the fashion and show business world such as Kate Moss, Naomi Campbell, Cara Delevingne, Jourdan Dunn, Grammy Award-winning music star Sam Smith and Hollywood star Maggie Gyllenhaal added A-list factor seriousness to the  Burberry Prorsum Autumn/Winter 2015 collection catwalk presentation by Burberry Prorsum’s chief creative officer Christopher Bailey and his team.  Bailey is responsible for the design of all Burberry collections and products, as well as all advertising, corporate art direction, architectural design, multimedia content, and the overall brand image of Burberry.

The Burberry collection was titled Patchwork, Pattern and Prints, and saw Bailey and his team and Burberry bringing back the bohemian style with a print-filled show, which had a 1970s-nostalgia feel to it, and was also inspired by the textile-making traditions of northern England. The show had an electrifying concert arena feel to it, and featured a women’s orchestra accompanying Clare McGuire, who made the audience swoon with her interpretation of Carole King’s “Will You Still Love Me Tomorrow?”  The show saw Burberry partner with Twitter to enable those watching the Burberry Prorsum Autumn/Winter 2015 collection event live around the world to snap a photograph of the catwalk models as they came down the runway.

Taking part in this year’s LFW were also two young Baltic designers, Liucija Kvasyte from Lithuania and Linard August  from Latvia.  Liucija Kvasyte participated in the  new platform ‘’Next In Line’’ which was created within  the fourth International Fashion Showcase. The annual coming-together of countries as exhibitors has become not only a forum for individual designers, but also offers an opportunity for young curators to capture and set out how their generation views things. Sarah Mover MBE, a British Fashion Council Ambassador for emerging talent and European-at-large of vogue.com, said that  “For me, it is both exciting and humbling to see creative people coming together to articulate who they are; fashion is a medium which does this for individuals, and, at best, can generate a proper pride in national identity and resourcefulness.”

The 2015 International Fashion Showcase showcased 130 emerging designers from 30 countries. Kvasyte was one of ten designers nominated by fashion institutions, in her case nominated and supported by Lithuanian Culture Institute and The Ministry of Culture of the Republic of Lithuania,  to represent emerging talent from their countries. This is the first occasion that Lithuania has had a representative at the International Fashion Showcase. Kvasyte presented her collection “Journey 1983 – 2013” which drew inspiration from  her internship in Iceland at the JOR by Gugmundur Jorundsson design studio.

Kvasyte stated that ‘’I worked with menswear and all my leisure was spent in the surroundings of Reykjavik - in the amazing nature, where the idea for the collection grew until it developed into a concept. I found how interesting it is to be in harmony with the environment and people around. So I chose my dad as a main character – the mountaineer, because in his youth he climbed lots of mountains and had perfect memories of his experiences. So I decided to use his material as my storyline and create a collection, which connects two backgrounds - my father’s experience and my attitude to his empathy. That’s why the collection feels generational conflict, which I took over the aged and modern fabrics”. Kvasyte said of her participation at the LFW that “It is a great pleasure and honour to have represented Lithuania in the  context of London Fashion Week. Lithuanian fashion surprised and enthralled everyone”. The event organised by British Council, along with the British Fashion Council, described Kvasyte as a designer who creates harmony between the past and present with a responsible approach to traditional and modern challenges. Kvasyte undertook her training at the Vilnius Academy of Arts Department of Costume Design.

The young Latvian designer Linard August had travelled to London for the LFW to assist internationally renowned Korean-born, London-based fashion designer Eudon Choi for Choi’s LFW catwalk show for his anticipated new 2015 Autumn/Winter collection. August stated to the Baltic Times that ‘’Eudon Choi’s designs for his show were inspired by the Japanese architectural movement metabolism, which evolves around circular structures. But geometric did converge in meeting organic aesthetic in Choi’s collection, blending his collection with the 1970s for stellar floral flares in teal and shocking pink, alongside Choi’s signature stealth outerwear. My work with Eudon Choi has been an invaluable learning experience for my professional training and development, which would not have been available in Latvia. For August, LFW also represented networking possibilities, in a  one-on-one meeting with Maurice Mullen, the head of Fashion and Luxury  at the London Evening Standard and its supplementary ES Magazine, and who has been at the forefront of fashion publishing,  August  discussed fashion related topics ranging from his own work together with renown British London-based artisan and couture accessories designer  Ed Griffiths (who has created custom sculptural pieces and accessories for fashion clients, ranging from Fendi, Todd Lynn and Emanuel Ungaro haute couture, and professionally consults for brands, such as Danish footwear, leather producer, and footwear accessories company Ecco) in making the leather products for the forthcoming drama film “By the Sea” written and directed by Angelina Jolie, in which Jolie will also star in alongside Brad Pitt,  as well the  challenges facing a young designer in Latvia in finding investment to present a collection.

“Not only has it been a tremendous learning experience participating in London Fashion Week, but being able to network with some of the industry’s leading fashion figures, like Maurice Mullen and British journalist and the Fashion Director of the Daily Telegraph, and one of the UK’s leading stylists, Hilary Alexander, OBE. Attending the catwalk shows of some of the world’s leading  brands,  has been invaluable and rewarding. Furthermore, London Fashion Week left me in awe at the high professionalism exhibited, as well the attitude and strong work ethics shown by those working in the fashion industry’’ August said.  August, who radiated a deep passion for fashion, designs and makes clothes himself, has participated in Riga Fashion Week, and intends to pursue further study at the prestigious and highly coveted London fashion school of Central Saint Martins which has played a major role during the LFW through highlighting 40 students designs during the Central St Martins MA show which celebrated the enormous pool of internationally emerging talent that Central Saint Martins harnesses. This famous London design school has trained numerous leading designers in international fashion studios, including Lanvin, Celine, Balenciaga, Calvin Klein, Acne and Louis Vuitton. Furthermore, some of the schools most renowned fashion design alumni have included names such as Phoebe Philo, Stella McCartney, Alexander McQueen, Mary Katrantzou, Christopher Kane and numerous others. ‘’Central Saint Martins is the crème de la crème of fashion training’’ August said.

But what about the other side of the fashion industry, an industry often accused of exploitation and subjugation. During LFW, the voice of the London Ethnic fashion label, which was formed as a collective of London based fashion designers, was also heard.  The label aims at raising awareness of the exploitation of third-world laborers. Knowing who made your clothes has become a very important measure of the ethics of the fashion industry. London Ethnic is addressing the question of where one’s clothes are produced, and consumers need to be informed about the clothes they buy and the conditions they are produced in.

All week at LFW, designers dared to indulge and enjoy an undercurrent of opulence, decadence and bourgeois elegance. As the curtain fell for the 2015 LFW, what may be remembered is the new era of gilded-age craftsmanship and an unapologetic taste for romantic luxury. A new aestheticism prevailed in the air at the LFW, which conveyed refined sensuous pleasures and luxury, richness in colors and texture.

For those planning to visit London during the 25 April until the 27 September 2015, the Victoria and Albert Museum will be staging the exhibition ‘What is Luxury’. The exhibition will interrogate the concept and ideas of how luxury is seen today, endeavoring to address how luxury is made and understood in a physical, conceptual and cultural capacity. The Victoria and Albert Museum will be displaying extraordinary works of craftsmanship, including a couture gown by fashion designer Iris van Herpen and outstanding examples of haute horlogerie by British watchmaker George Daniels, alongside more unexpected projects which explore the cultural value of materials such as gold, diamonds and plastic. Furthermore, the future of luxury will be explored, seeking to ask questions about the role that time, space, privacy, well-being, social inclusivity and access to resources and skill may play in determining our choices and aspirations.
What is Luxury? aims to take visitors on a journey and prompt them to consider what luxury means and how it relates to their own lives.

Further information available on the Victoria and Albert Museum’s website at http://www.vam.ac.uk