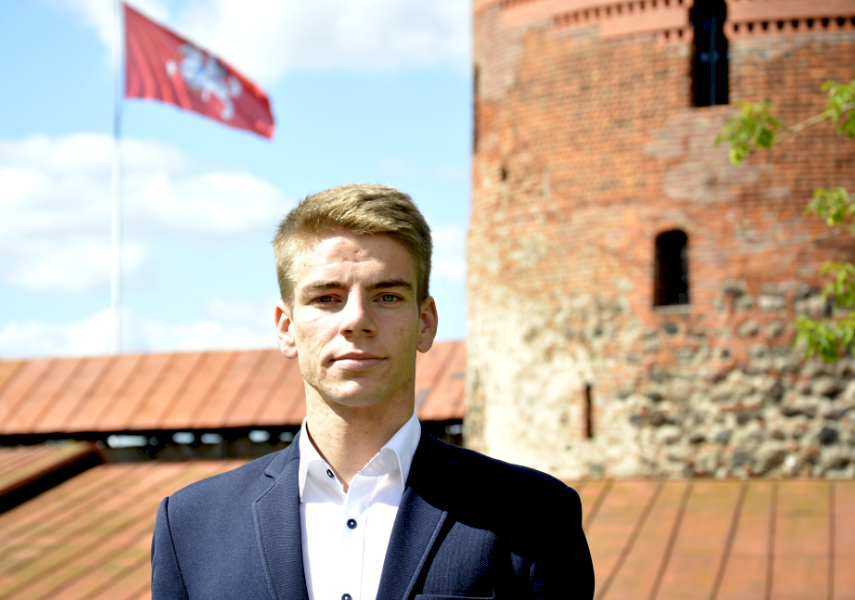 We all cherish earthly and not so earthly dreams, with fewer of us going after them. But Justinas Grigaitis, a 20-year-old Lithuanian with his first year at a French University under his belt, has taken the dream a little farther than most of his peers, to NYC’s Columbia University, at which he seeks to enroll should his crowdfunding effort to scoop up enough money pan out. The Baltic Times spoke to the well-rounded youth about his strives.

Tell us a little about yourself, please... How did you end up being in the US, NYC?
I have never dreamt of such an opportunity in my life. Although, I was a good student in high school and I have always been actively involved in many extracurricular activities, I did not think I was exceptional enough to study at the world’s top universities in the US. Therefore, I chose a less competitive alternative in Europe, which matched well with my expectations. However, studies at Sciences Po in France showed that I can succeed even in a very challenging environment. After the first year, I had a chance to apply for the Dual BA programme with Columbia and as you see, here I am today — starting the new school year in New York City, at the university once attended by the President B. Obama.

How is the crowdfunding effort going? How did you resort to it?
The crowdfunding campaign requires a lot of effort, indeed, but I am happy that most people support this idea. Thanks to them, I can successfully start my studies and pursue this degree. Actually it was the only possible solution in my case, therefore, I put a lot of effort into presenting it seriously.

Do you know how much money you have garnered at this point? Are you able to follow the donations’ flow on your bank account?
In total I have received 12,000 US dollars in donations (through GoFundMe and my bank account) and 40,000 dollars in scholarships. I am also waiting for a few responses from different foundations in the USA that should provide me with an additional 5,000 dollars.

Did you get your parents’ approval on crowdfunding?
My parents supported my crowdfunding idea because they saw how important this academic project is for me and they knew that they cannot help me to finance it anyhow.

Why don’t you try to get a grant for the studies, which is what most students do?
My parents’ income is not sufficient to take a loan and I could not receive a student loan from the Lithuanian government because it only sponsors students who study in Lithuania. Similarly, I cannot borrow money in the USA because I am not a US citizen and I do not have a close relative there who would cosign a loan for me.

I’ve read you are a devoted Christian. Why don’t you ask Christian organisations for help?
Although faith is very important in my life, it is a personal thing to me. I think that all people should help one another when it is needed, despite their religion or beliefs.

How was the experience at France’s Po Paris University? I’ve read you have been among the best students after your sophomore year. How talented must you be to accomplish that, considering that the studies were conducted in French?
I was at the Sciences Po Paris campus in France’s Dijon and I was among the best students after the freshman year.
However challenging this experience was, I absolutely loved my studies there. I could discover the subjects that I have never studied in Lithuania before and find fields that I am really interested in. I think that helped me to achieve such results the most.
It is scientifically proven that learning a new language is the most stimulating process and if you commit to it, it makes you happy every day.

What other languages do you speak?
I fluently speak Lithuanian, English, and French. I do speak and understand Italian quite well, too, and I also have the basics of Russian.

How much do you need for studies at Columbia?
One year at Columbia costs 70,000 dollars. However, Columbia together with Sciences Po finance the major part of tuition, therefore, the real cost for me is 30,000 dollars. Besides that, my scholarship for the second year can be increased based on academic results, therefore, I will try to do my best at school, so that I do not need any additional help.

Can you break down the expenses for a freshman’s year at the university?
Basically, 95 per cent of the money goes directly to the university. Tuition is 52,000  dollars, housing is 10,000 dollars, insurance and other fees 4,000 dollars. I added 4,000 dollars for living expenses such as food, transportation, and school supplies, keeping in mind that prices in New York are really high.

How can one be sure that the money collected through the public effort will be used by you for the purpose of education?
For this reason I update my expenses online on www.tinyurl.com/JustinasBudget and describe my time in New York on Facebook, on my “I Support a Dream” page. Most of the people who donated know me personally, thus, they can tell that my way of living is very modest and I have never wasted any money. I will also save as much as possible in order to finance my second year of studies.

What are the reactions you’ve heard since you made the plea on Lithuania digital media? Some of them have been quite averse, you have to admit.
Anonym reactions were negative — people accused me of things such as “cheating, stealing and wasting money, being arrogant and lazy.” I do not take them personally because I can understand that from the outside perspective this campaign might appear as such. However, those who know me have actively supported my dream — a thousand people shared it on Facebook, many of them sent me private messages with advice or positive comments.

I reckon crowdfunding in the West is a widespread tool to scoop up necessary money for a purpose, is it not? How popular do you find it in Lithuania?
It is true that crowdfunding is much more popular in the Western Europe and in the United States than in Lithuania. I only found out about it when I lived in France, so I can say that there is a lack of information about such ways of financing personal or business projects. However, it is a pity that in Lithuania the donating culture has not developed yet in general. Many people still think that the state should take care of everything and do not get involved in civil initiatives.

Forgive me for my bluntness, but some of the people who wrote comments under the story on your crowdfunding endeavor have simply ridiculed or condemned you. Many would argue that all the cancer patients out there are way more worthy of funding through a public initiative like yours. What would you tell these kinds of people?
Obviously there are thousands of far more urgent and important causes to donate for. However, I would not have started my campaign if I was not convinced that my studies are worth such investment and will pay off in near future. Then I will donate all the money that I have received for charitable purposes that you have mentioned.
Anyway, I am pretty sure that those who donated money for my campaign, also donate for other causes, whereas those who criticise me are more likely to be egoistic and do not help anyone at all.
For all people who write hateful comments, I would suggest to first check the basic facts (most of them had no clue what Columbia University is, many people have not noticed how much money I received in scholarships) and then talk to me in person.

As a graduate of one of the best Lithuanian gymnasiums, Kaunas Technology University, can you enroll many of universities and colleges out there? Why are you specifically interested in Columbia?
Firstly I was interested in studies at Sciences Po and only then I found out about the opportunity to study at Columbia. Besides the excellent quality, unique programmes, and a great variety of courses, Columbia University is situated in the centre of New York and living there is a very enriching experience in itself.

If you can be honest, what you dislike about Lithuania’s education system?
The major problem with the system of universities is the logic of “quantity over quality.” Universities are being financed by the state based on the number of students, thus, their goal is to attract as many of them as possible and the easiest way of doing it is to lower the requirements. Then neither institutions, nor the students have financial incentives to improve their quality and performance. I think university level studies should require more serious engagement from those who want to attend them.

Why did you decide not to continue education in Lithuania? Have you considered this possibility?
I have always thought that I was going to study in Lithuania, but Sciences Po was an opportunity to acquire more experience, learn new skills such as the French language, and analyse my own country from a broader perspective.

By the way, do you know where the dreams — and fate — have taken your former classmates in Kaunas?
Some of them integrated into world’s famous universities such as Oxford, Cambridge, or Harvard, others successfully continue their studies all around Europe from Berlin to Edinburgh, from Amsterdam to Paris.
For me it is no surprise that those who stayed in Lithuania are doing very well, too — one friend has just received a permanent position as an electronics engineer, another has worked at a private laboratory since their very first semester, a third works part time at an IT company — as far as I know, everyone has already had a chance to gain some professional experience although we are all only 20 to 21 years old. It shows that especially for young people opportunities are everywhere around. One just needs the motivation and persistence to look for them.

Why do you want to study educology and economy, two quite unrelated fields, at Columbia?
In my case those two fields are very much related because I want to do economic research: analyse public spending on education and find the most efficient ways to invest in it. Also, such a study programme will improve my quantitative and communication skills, analytical thinking, and leadership abilities. Finally, education is my passion — I would like to teach economics and work to improve school programmes later on.

Do you have any message to all of your peers back in Lithuania?
Don’t be afraid to take challenges that seem impossible — it is the only way to progress.

What has been the most stunning discovery about New York so far?
What I appreciate the most is New York’s diversity. There is no way to describe what the city really is because every tiny part of it is completely different. That what makes New York unique. When it comes to people, New Yorkers are busy, determined, goal oriented, but very helpful and open at the same time.

And, most importantly for you, what is the bank account through which interested people can make your dream come true?
For those who are interested, I invite to watch a short video about me and support my story here — www.gofundme.com/LithuanianDream. Also, it’s possible to donate through the bank —  Justinas Grigaitis “For studies at Columbia” LT39 7300 0101 3186 3773 (IBAN - HABALT22)