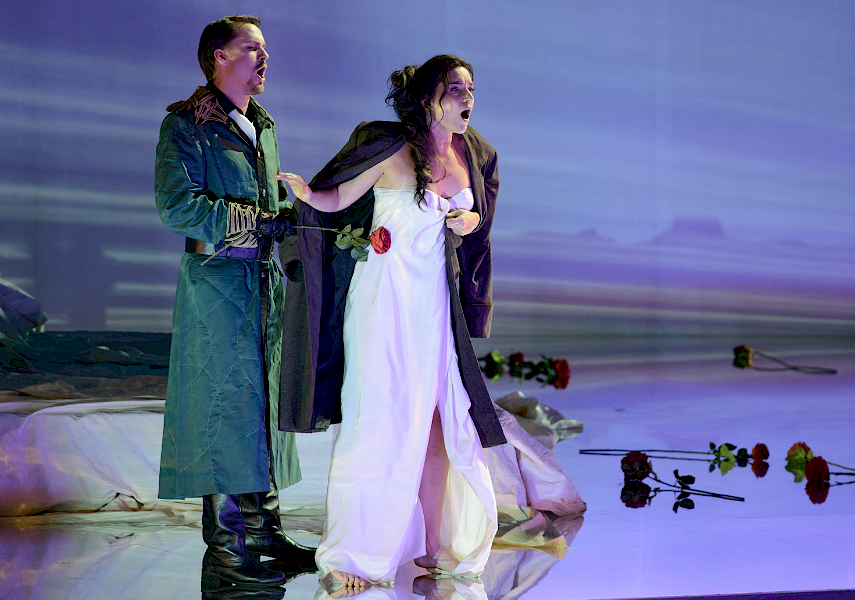 DECEPTIVE AND DELICATE: Fabienne Conrad is excellent as Massenet’s Manon.

“Manon” is a sensual tragic opera with a haunting score and mesmerising storyline and herein lies its essence; what makes the four-hour production so strong is the solid backbone of the plot, which charts the fall of lovely yet somewhat anti-heroine Manon. Set alight by Jules Massenet’s graceful and magical orchestral score, we are led on a journey into La Belle Epoque of Paris.

“Manon” is risky; it can fall desperately short if the chemistry between the two lovers is not absolutely believable; with the crackling chemistry between Manon and des Grieux, you have a masterpiece of the highest calibre. The emotions between the two leads were tangible, even when the stage consisted of the entire opera ensemble. French soprano Fabienne Conrad is the eponymous Manon, performing with full coquettish charm and fragility; Belgian Michael Spadaccini as her lover, des Grieux, is full of pain and anguish, and Eugenijus Chrebtovas is perfectly cast as Manon’s cousin, Lescaut.

Director Vincent Boussard has created a collaborative work of brilliance, also designing the elaborate traditional swirling costumes which sparkle on set designer Vincent Lemaire’s modern minimalist stage. The set is stark, with its mirrored walls yet so effective as it focuses our attention on the opera itself.

Manon is a chameleon of a girl, twisting and turning constantly shifting her affections and personality. She is not entirely a victim of circumstance such as Madama Butterfly, so she has to work to gain our sympathy. Although events of Fate do play their part in her demise, it is Manon herself who makes those choices starting from innocent and naive girlhood through to greedy and frivolous, ever the enchantress, yet ruined and broken by the finale. What happens to Manon is undeniably tragic and by the opera’s end, it would take a heart of beaten metal not to feel sadness for beautiful Manon dying in her lover’s arms. Just as she has earned her forgiveness from des Grieux, so she has worked throughout this opera to win a place in our hearts.

Massenet’s score is essentially the leading light which pulls us through the darkness of his opera in ever-increasing circles. Massenet has a feeling for tragedy like no other, perhaps at times even more so than that great puppeteer of emotions, Puccini. While Puccini shouts out tragedy with full-blooded Italian passion, Massenet is more subtle, quietly building layer upon gentle layer of pain. It is deceptive and delicate, just like Manon herself.  Anyone who has seen Massenet’s “Werther” knows that despite the light-hearted moments and swirling music, there will be no escaping a tragic ending in “Manon.” Conductor Cyril Diederich leads the orchestra effortlessly through Massenet’s score as the five acts build up to a desolate finale.

The role of Manon demands an ever-growing personality, vocally and dramatically. As her character develops, so too does the depth of lead Conrad; her voice commands the entire stage right down to her last mortal breath. Manon centres this opera; she is reckless, careless, and greedy yet always so delicate, her sad notes of sorrow floating through the auditorium, seeming to linger before gently falling to the stage.

Lithuanian National Opera performed Massenet’s masterpiece to perfection and as darkness falls on the two lovers alone in sorrow, there we must leave it.
“Et c’est la l’histoire de Manon Lescaut,” as Manon whispers at the close of the opera.

Co-production between the LNOBT, San Francisco Opera and the Israeli Opera

Next performance: May 11 (also returning in September season)