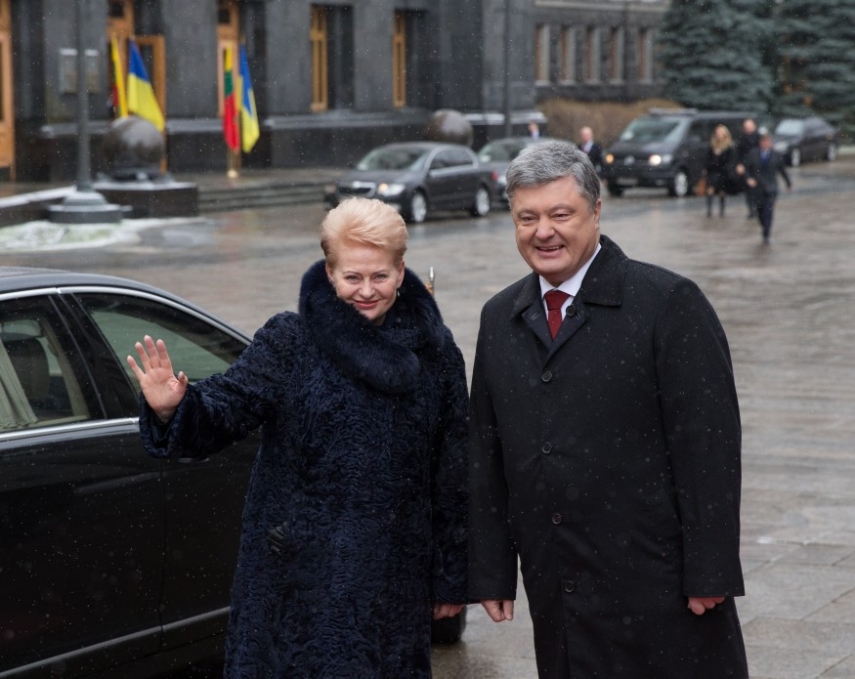 VILNIUS – Lithuanian President Dalia Grybauskaite, currently on a visit to Kiev, on Friday promised that Lithuania would send ammunition to Ukraine and also more army instructors to train local forces.

"We have decided to provide military assistance immediately in the form of ammunition, we will increase the number of military instructors and cyber security instructors. We have also decided on additional humanitarian assistance," Grybauskaite told a joint press conference with her Ukrainian counterpart Petro Poroshenko.

"We know how difficult it is for large countries, for international institutions to move, to make a decision, but we can do it," she added.

Lithuania has previously supplied Ukraine with ammunition, as well as certain weapons and hardware, with the first shipment sent reaching Ukraine in 2014 when Russian annexed Crimea and started supporting separatists in eastern Ukraine.

Currently, over 20 Lithuanian instructors are training Ukrainian forces. Under a parliament mandate, Lithuania can send up to 60 troops to Ukraine.

The Lithuanian president pledged military assistance to Ukraine after the incident in the Kerch Strait near Crimea in late November when three Ukrainian ships came under fire from Russian border guards and were later rammed.

Lithuania plans to add 20 Russian citizens to its blacklist over the Kerch incident. The sanctions will be introduced for persons who "were directly involved in the act of aggression against Ukraine's military ships", including representatives of Russia's military leadership, to be included into the national list of persons declared persona non grata, Lithuania's Ministry of Foreign Affairs said on Thursday.

"Sometimes it is not easy to be the first with sanctions or supporting you (Ukraine – BNS Lithuania). Sometimes you have to be prepared to pay the price for it, even a personal one. We have received direct attacks from Russia, (…) but we are taking it as a necessity, as an expected reaction," Grybauskaite said.

The Lithuanian president said the issue of additional EU sanctions would be discussed during the EU summit next week when the extension of the Moscow sanctions, introduced in 2014, will be discussed.

"About the new sanctions, I cannot guarantee on behalf of all member states," the Lithuanian president said.

The Ukrainian president said with the Kerch incident, Russia attempted to provoke the Ukrainians and thus be able to launch a large-scale land operation.

"This means that Russia has nothing to explain," the Ukrainian president said, calling on the international community to expand the sanctions against Moscow.

Grybauskaite said Lithuania would back Ukraine's request for NATO to send in more ships to the Azov and Black Seas.

During the visit of the Lithuanian president, Lithuania and Ukraine signed several agreements, including an agreement on the employment and cooperation in the area of labor migration.

Politicians hope such an agreement will allow fighting illegal employment amid a growing number of Ukrainian migrant workers in Lithuania, and also ensuring that Ukrainians working in Lithuania have all social guarantees.