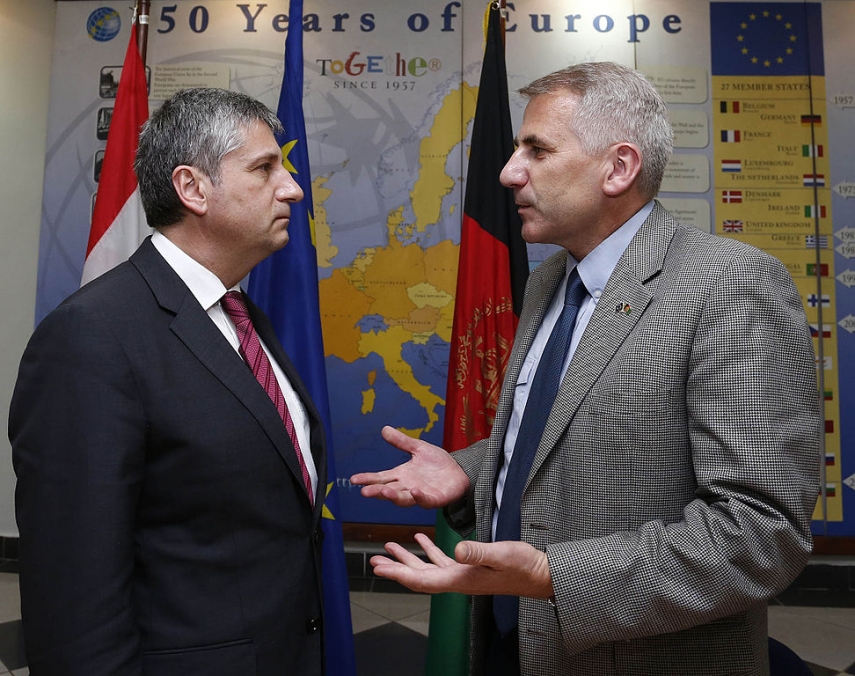 VILNIUS – Lithuanian diplomat Vygaudas Usackas, the European Union's (EU) ambassador to Russia, says he will shortly end his diplomatic service in Moscow and engage in analytical work and politics upon return to Lithuania, listing the demographic crisis as the key challenge in his home country.

In an interview to BNS, Usackas said he was still undecided on running for the 2019 presidential elections.

The 52-year-old diplomat said the Western world would probably not be able to reach common grounds on Ukraine with Russia, noting developing cooperation in other areas. In his words, Lithuania should also revise its position of no contacts with Moscow.

“You may not like your neighbors, they may be hostile, however, you cannot change neighbors and you should talk to them. We are probably the only country that has not had contacts with Russia on the governmental level for a long time,” said Usackas.

In the diplomat's words, Lithuania will shortly have to address the dilemma of maneuvering between the EU and the United States, if the trade disputes between them escalate.

BNS: WHEN DOES YOUR SERVICE IN RUSSIA EXPIRE AND WHAT WILL YOU DO NEXT?

Usackas: I am ending my term as the EU ambassador to Russia on Oct. 1. After 26 years in this phase, I will close the door to diplomatic service.

I intend to use my network of acquaintances from America to Asia as a member of the European Foreign Council, I will contribute to the shaping of European policies, relations with the US and the problem regions, including Russia and the Middle East. I have scheduled a series of lectures and meetings in Europe and the US for this year.

Secondly, I have been invited to head the Europe Institute of the Kaunas University of Technology and the ISM University of Management and Economics. As a director, I will share my experience with students and the country's communities. I will also continue close cooperation with my Alma Mater – the Vilnius University and the Vytautas Magnus University, which I am an honorary doctor at.

Thirdly, it hurts me to see our country getting deeper in the swamp of inexperience and incompetence, therefore, I will work to contribute to the improvement of the demographic situation – to my understanding, the most important political, economic and security challenge Lithuania is faced with. We should change the emotional condition in Lithuania and spread the news that we are waiting for Lithuanians to return. Brexit, geopolitical and economic indetermination is changing the external conditions, therefore, we should be more determined and inventive. We should create the best conditions for foreign investors, change the situation of being unable to get our citizens back and refusing entry to foreigners, not fighting for talents and human resources, as our residents leave Lithuania. This requires a consensus of political parties, a strategy, political will and responsibility of top leaders.

BNS: DO YOU INTEND TO RUN FOR THE PRESIDENTIAL ELECTIONS?

Usackas: The presidential election is scheduled in two years, making decisions now may be too early.

BNS: YOU ARE A MEMBER OF THE HOMELAND UNION – LITHUANIAN CHRISTIAN DEMOCRATS (CONSERVATIVES). DO YOU INTEND TO BE INVOLVED IN THE PARTY'S OPERATIONS?

Usackas: First of all, I am a citizen of Lithuania who recognizes values of freedom, democracy, and individuality. I work with people of different attitudes and professions, starting with businessmen and ending with academic and civil society, regardless of whether they are part of the right or the left wing. I will make no difference in the academic and expert activities.

Without a doubt, I manifest conservative liberal values in economic policies and Christian values. I will continue supporting the revival of the Homeland Union – Lithuanian Christian Democrats brought by Gabrielius Landsbergis, I am fully behind his election and leadership.

BNS: DURING YOUR TERM AS AMBASSADOR, THE RELATIONS OF UKRAINE AND SYRIA'S WEST WITH RUSSIA DROPPED TO THE LOWEST POINT SINCE THE COLD WAR. HOW CAN THESE RELATIONS DEVELOP FURTHER?

Usackas: It was my destiny to be the EU representative during the deepest crisis of Russia's illegal actions in the annexation of Crimea and destabilization of Ukraine. Our positions still differ on Syria and Afghanistan. My four years of operations were dedicated to helping leaders of EU countries understand the developments in Russia and proposing solutions on curbing Russia's possible further aggression.

We aimed to preserve the ties with the Russians cherishing democratic and freedom values, as well as the ties with government officials, knowing Russia's geopolitical weight as a nuclear country and a member of the United Nations Security Council.

I believe that the relations between the West and Russia will not be homogeneous. I do not expect a fast consensus on the Ukrainian matter, as our views of the origin of the conflict are very different. We see this as manifestation of democracy and the nation's discontent with the former (Viktor) Yanukovych regime, while Russia still speaks about the change of the political regime conducted by the CIA with EU flags. On the Russian side, there are not enough efforts to implement the Minsk accords.

After the elections in the US, the Russian leadership may have cherished hopes about deals and division of zones of influence, soil for such expectations was prepared by some statements Donald Trump before and immediately after the elections. However, the EU demonstrated leadership publicly and in other ways, accentuating the importance of the implementation of the Minsk accords.

Our economic sanctions had an effect – the concept of Novorussia disappeared from speeches by Russian leaders and reviewers, which was discussed in public during the peak in 2014 when Crimea was annexed and Eastern Ukraine was destabilized by military instruments.

Unfortunately, experts and even some politicians refer to the situation in Eastern Ukraine as a frozen conflict, therefore, the biggest focus should be on long-term European support to the Ukrainian efforts of bringing more transparency to its political system and economic modernization. In my personal opinion, the initiative proposed by Lithuanian politicians in connection with the Marshall plan for Ukraine is very important, Lithuania should include more countries and political figures here, including from the EU's biggest countries, as we will not be able to implement the Marshall plan by ourselves.

With Russian leaders, we openly discuss our differences on Ukraine, violations of human rights, restriction of free press and political opposition. On the other hand – this was also discussed by my superior Federica Mogherini during her visit to Russia in May – Russia remains EU's biggest neighbor. To the EU, it is an important supplier of energy resources and a market of 140 million people. Without coordination with Russia, the Syria conflict will not be ended peacefully. This has been discussed by the US president, we are also talking about this.

BNS: LITHUANIAN LEADERS AND DIPLOMATS USE STRONGER WORDS THAN MANY OTHER EUROPEAN COUNTRIES WHEN THEY SPEAK IN SUPPORT OF ISOLATING RUSSIA. IS THAT THE RIGHT THING TO DO?

Usackas: I believe the meeting between presidents Trump and Putin that just took place will bring certain changes. Disagreements on some issues will remain, however, cooperation is in progress, for instance, when it comes to the Syrian ceasefire. Some 600 businessmen from the US attended the St. Petersburg economic forum, which was also attended by large delegations from Germany, Italy, and France.

We must pursue smart and inventive policies that would meet our national interests. Although a bit late, we are doing something. Eight years ago, some political leaders questioned the importance of the Lithuanian relations with the US and the earmarking of necessary funds, and it is a very good thing that the attitude changed. No matter who the leader is, the United States remains our most important strategic partner for defense guarantees. The task for the Lithuanian diplomacy is to attract US and NATO presence and deterrence measures.

At the same time, it is important for us to understand that changes are happening in Europe. Germany and France will shortly propose initiatives of manifold and flexible EU development, we should be preparing and have a position of our own. It is our objective to remain in the center of the processes.

The conflict with Russia on world outlook is deep and long-term. We will not return to the usual relations anytime soon, however, Russia is and will remain our neighbor. You may not like your neighbors, they may be hostile but you can't change your neighbors, and you should talk to them. Trump, Merkel, Macron, Juncker – they all speak to Putin. Our neighbors Finland, Sweden, Poland, Latvia, and Estonia all speak to Russia on the level of prime ministers, ministers or vice-ministers.

I believe Lithuania should also have politicians who would speak with neighbors. If the president is not capable or willing to communicate, there is the foreign minister, the minister of transport and communications. We can start with the level of vice-ministers. We are probably the only country that has not hand contacts with Russia on the governmental level for a long time.

The Russian Kaliningrad region is of extreme importance to us strategically, economically and culturally. From the EU side, the regional cooperation had never been interrupted, therefore, it comes natural and normal to maintain contacts with the region's leaders and representatives of districts.

In the fall, Zapad 2017 military exercise will be held next to Lithuania. It is important to have a telephone number that could give information about forces, maneuvers, and suspicious military movement in an effort to diminish the risk of military incidents.

BNS: WHEN YOU SHARED A FACEBOOK ENTRY IN MARCH OF TRUMP APPARENTLY REFUSING TO PRESS MERKEL'S HAND, YOU EXPRESSED DOUBT WHETHER HE DESERVED TO BE A WESTERN LEADER. WHAT DID YOU HAVE IN MIND?

Usackas: we have to admit that the EU relations with the United States are not in its heyday now. After World War II, the US was the leader of the free nations of the world, while the President Trump administration sometimes communicates uncertainty and lack of leadership.

It is a good thing that he specified his stance on NATO security guarantees. I have always said that his political agenda would become clearer in about a year after he completes the transformation period from a colorful political figure and former investor to the president of the world's most powerful country. The system of checks and balances in the US works.

Without the doubt, the EU is disappointment with the Trump decision to withdraw from the Paris climate change agreement. We see tendencies of discarding the trans-Atlantic free trade agreement, threats of imposing barriers on steel trade. EU officials have already said that the EU would have to respond if the Trump administration fails to follow the agreements of the World Trade Organization and thus harms trade interests.

The character of relations with the US is becoming more diversified, featuring differences. It is a challenge for Lithuania to maneuver in the new geopolitical waters and keeping the axis of trans-Atlantic security, at the same time defending the EU and consequently the economic interests of Lithuania.