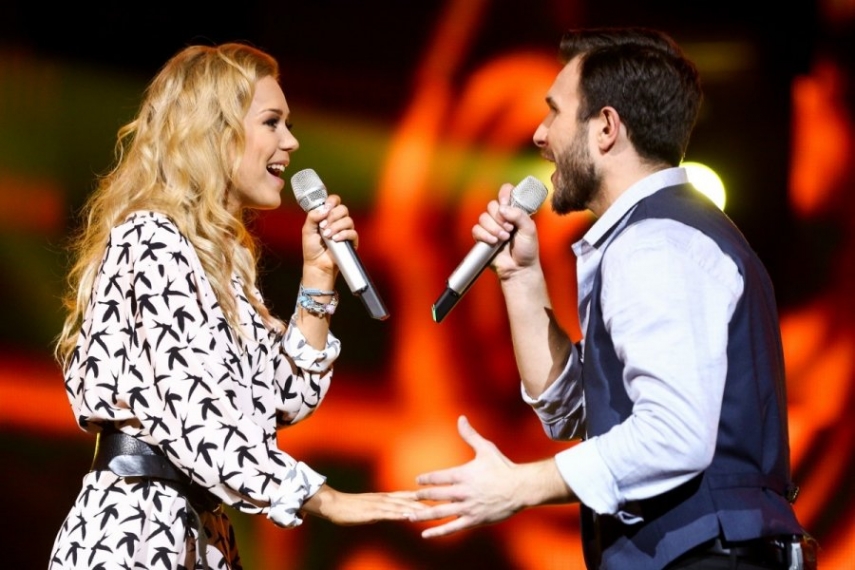 STOCKHOLM - Having been placed near the bottom of the list of the Eurovision Song Contest’s results for what seemed like eternity, Lithuania’s luck appears to be changing.  Judging from this year’s Eurovision entry, a duet appropriately entitled “This Time” performed by Vaidas Baumila and Monika Linkyte, things are definitely looking up. If Lithuanian Television (LRTV) continues on the path it has recently followed, there is a strong possibility that Baltic pop music could very well be on its way back into the European mainstream again as it was in 2001 and 2002 when Estonia and Latvia  won the Eurovision Song Contest one after another. The question however is perhaps a bit more complex than that. Will Lithuania  be able to maintain its grip on the contest and thereby increase and enhance the growth of its own domestic entertainment industry?  My recent observations show that Lithuania, the largest of the three Baltic nations, could very well be on the way to surprising everyone by doing just that.

I have observed the Lithuanian entertainment industry at very close range on a regular basis since 2003. Initially I discovered a sort of “Wild-Wild East” culture containing a mixture of charm and chaos, not to mention an ample amount of slip-shod workmanship in the production quality of popular music and television shows. This included everything from low-quality artists to inexperienced money-hungry smash ‘n’ grab-style managers. The Lithuanian music business culture was undoubtedly very inferior to that of the rest of Europe.

But despite all this, Lithuania did have some potentially international stars. One of these is Marijus Adomaitis , who after several years of hard work, alone in his studio in Vilnius, achieved international success under the artist name Ten Walls. But the success didn’t come through the help of Lithuanian managers, but with the help of foreign music agents in London. His latest single “Walking with Elephants” has recently been climbing the pop charts in several countries, thereby making him Lithuania’s first really successful pop star on an international level. Another Lithuanian artist who has gone beyond international borders is Alina Orlova who has brought her special style of music to France, which is known for being one of the most difficult music markets in Europe to break into. But in her case most of the credit goes to her innovative producer, one of Lithuania’s successful impresarios, Lauras Luciunas who in spite of the historically rough music business culture in his country, still managed to successfully work his way up through the ranks.

My observations have shown that there are many talented artists in Lithuania, and so one can only wonder why the country has failed so hopelessly at the Eurovision Song Contest?

Since the turn of the century, most Lithuanians haven’t taken their country’s participation in Eurovision seriously. In fact many hate the contest and some of them openly ridicule it. Consequently, the country’s best artists have stayed clear of the contest, almost as if it was a disease.  This has resulted in a number of very poor-quality artists representing Lithuania, not to mention some totally disastrous songs. Not only that, but the quality of the television show that used to be aired from Sporto Halle in Kaunas was not good. Bad lighting and camera angles and sub-standard sound quality made the whole Eurovision spectacle a sort of amateur show, almost like a Saturday afternoon secondary school concert. However, things have changed considerably in the last couple of years. But before looking at these changes let’s examine Lithuania’s track record in the Eurovision Song contest.

The first ever Lithuanian Eurovision entry was in 1994 with a song entitled “Lopsine Mylimai” performed by Ovidijus Vysniaskas. After finishing in a hopeless 25th (last place), Lithuania stepped out of the contest only to re-enter it again in 2001 with the popular group SKAMP who finished in an impressive  13th place  with a song entitled “You Got Style”. The following year, 2002, Lithuania failed as hopelessly as it had done in its debut. The song “Happy You” performed by Aivaras finished in an embarrassing 23rd place in the contest. This resulted in Lithuania once again stepping out of the contest in 2003. The 2004 contest was filled with an array of really good artists. But the result was yet another disaster. Despite receiving an overwhelming 92% of the public vote, one of the songs  from the contest which went on to become  that year’s most popular hit, was felled by a somewhat inexperienced Jury Commission which selected a disastrous song that  resulted in yet another nose dive for Lithuania.  That was the point at which I knew that Lithuania had a long way to go before achieving success in Eurovision. The Lithuanian public agreed, and their outrage at LRTV for dumping the people’s choice and replacing it with a colourless song was evident.

But then in 2006 something spectacular happened when a group of national celebrities decided to put a stop to Lithuania’s repeated defeats by challenging the contest in a bizarre, but effective way. Using the group name LT United these celebrities performed a half-crazy pop-rock anthem entitled “We Are the Winners”. From a musical point of view, the song was simple, annoyingly repetitive and uninteresting, but it definitely served its intended purpose.  Containing ironic lyrics that jokingly pointed fingers at the whole contest, the song was cordially received by Europe and gave Lithuania a 6th place, which was the best result it ever had at the contest. Whilst giving Lithuania a face in the contest, the song, when performed in open-air concerts around the country motivated a sort of domestic nationalism under the red, yellow and green flag almost turning the whole spectacle into a would-be Lithuanian national basketball type of event.

Following the success of “We Are the Winners”, Lithuania sent some of its poorest artists and worst songs to the Eurovision Song Contest. One exception is the young artist Sasha Song who is probably one of Lithuania’s best singers and could easily have won the Eurovision Song Contest if only someone had taught him how to choose a good song! It seemed as if nobody really cared, and Lithuanians just seemed to accept that their basketball nation just didn’t have what it takes it when it came to music.

But in 2012 all that changed when a powerful ballad entitled “Love is Blind” written by Russian-German composer Brandon Stone, was performed by Donny Montell (Donatas Montvydas). After a landslide victory in the national contest, it went through to the international contest and finished in third place in the semi final and 14th in the final, giving Lithuania some sort of Eurovision recognition. The man responsible for the change was executive producer Martynas Tyla, who is today the most powerful magnate in the Lithuanian music business. He is perhaps best described as the  Baltic equivalent of Sweden’s legendary Eurovision  Producer Bert Karlsson or Germany’s Musical Ace, Ralph Seigal.There is no doubt that  Tyla is the person responsible for cleaning up the unorthodox “Wild-Wild-East” culture of the Lithuanian music business. He appears to have just stepped forward out of the rubble of what was the Lithuanian Eurovision chaos and proved himself to have the ability to choose the best artists and the best songs.

In 2013, Tyla announced a five year plan for Lithuania to win the Eurovision Contest. However it seems that he may have succeeded already in his second year! This year’s Lithuanian Eurovision entry is of top international quality, and the artists who will perform it are undoubtedly of international class. Consequently, for the very first time in its history of participation in the contest, Lithuania is sending a potentially winning team to the international Eurovision final which will be held in Vienna on 19th – 23rd May. At worst, the song “This Time” should garner a high placing in the final.

But the winds of change that started in Vilnius a year ago, and which appear to be paying off already should also be accredited to the modernisation of the television programme Eurovizijas Dainu Konkursas. One of the people responsible for these changes is LRTVs chief of Eurovision Operations, Audrius Girzadas who seems to have picked up the pieces of the last decade and constructed a new Eurovision culture on Lithuanian Television. One thing which is clearly visible is how the quality of the show, which is now broadcast from the studios of LRTV in Vilnius has increased and is definitely up to international standards. Gone are the days of bad camera angles and poor sound quality. It is obvious that the former Soviet broadcasting culture has been eradicated and replaced with a new modern culture by a new young generation of technicians and producers under the direction of executives like Girzadas. The results of these changes have been reflected by the huge increase in ratings during the 2013 and 2014 domestic Eurovision television shows.

However, the most significant change that has taken place is how the songs are selected. A jury commission consisting of various people connected to the music industry, including one of Lithuania’s best radio personalities, Darius Uzkuraitis, and the country’s leading entertainmentsjournalist, Ramunas Zilnys, has injected quality into the selection process.  Zilnys, who is a staff reporter on the country’s biggest newspaper Lietuvos Rytas, is largely responsible for the increase in the quality of this year’s song. This is inevitably due to the fact that he is probably the one person in Lithuania who really understands the ins and outs of European pop music and is therefore an invaluable asset of unparalleled quality to the contest.

But what can Lithuania really gain from the Eurovision Song Contest? While LRTV prepares for its best ever entry to the contest, many observers may already be counting the billions of euros that could enhance the country’s economy if the Eurovision contest was ever brought to Vilnius. A thousand journalists from over a hundred countries would place the largest of the Baltic nations firmly onto the world map and thereby stimulate Lithuanian exports. That is what Eurovision is really about in the eyes and minds of politicians and economists when you get down to the nuts and bolts of the whole spectacle.

But for people like Martynas Tyla, Lauras Luciunas, Audrius Girzadas, Darius Uzkuraitis and Ramunas Zilnys, Eurovision is really about music, and thanks to these and a lot of other people at LRTV, the streets of Vilnius, Kaunas and Klaipeda could very soon be flowing with champagne.  If not this year, maybe next year, or the year after. But one thing is certain, Lithuanians are slowly starting to believe that it is likely to happen according to  Martynas Tylas’s five-year plan.