Life in The Bus Lane 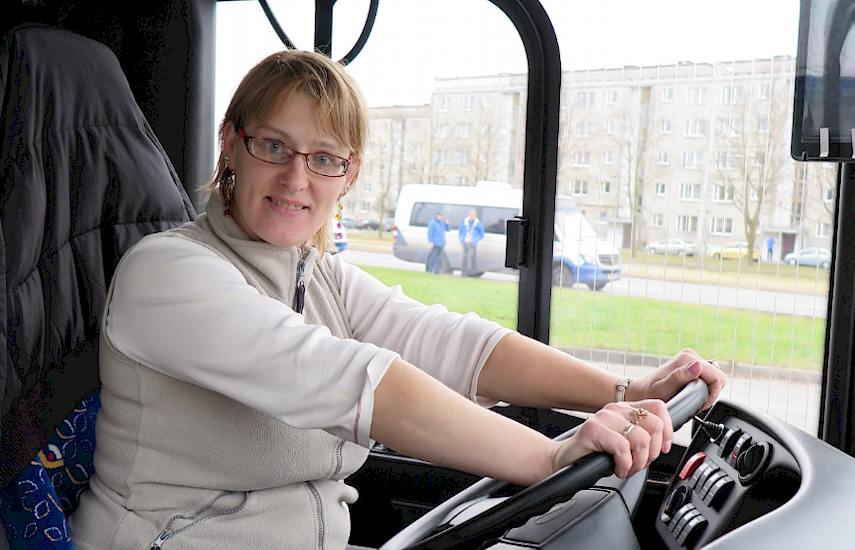 AT THE WHEEL: Dzintra Vilne

In the middle of rush hour in Riga, trolleybus drivers have to negotiate not only with shambolic traffic on the roads, but also with the bustle of impatient commuters on board. TBT Reporter Signe Sene speaks to trolleybus driver Dzintra Vilne to hear about life in the driver’s seat.

So how did you become a trolley bus driver?

Actually, my life threw me into it. Although I am from the city, I spent all my childhood in the country.
And what did you do in the country during the Soviet times?
I milked cows. During the summer I went into the countryside, and I was sent to a collective farm to milk cows, weed beets or pick potatoes. And that was my whole childhood. Either right next to my mother in a trolleybus or in the country, at a farm. But you could say that driving a trolleybus is in my blood because my mother was a trolleybus driver for 23 years and my father was for five years.

How long have you been working as a trolleybus driver?

20 years. And I really love my job. After the end of collective farms, I came back to the city to fulfil my dream – to become a trolley bus driver. And I did it. I have been a trolleybus driver since Feb 7th, 1995.

Was this job always your dream job?

Yes. Because I need movement. That`s the reason why I have two wheels, four wheels and ten wheels. I cycle, and I drive with a car and a trolley bus. I have never wanted to just sit still and do something peaceful. Even when I was little, I was into machinery and mechanics. I repaired cars together with my father and have known the smell of oils and petrol since I was just a child.

Is there a routine in trolley bus driver`s everyday life?

No, there isn`t any routine because you are not driving through a forest or a desert where you can know everything. A trolleybus driver needs to think about everyone else on the road. You need to know what your passengers will do, what’s in the mind of every pedestrian, cyclist and every person who sits in their car. We need to know everything about everyone. Every round is like a new adventure. Of course, you know your stops, special bus lanes and every hole in the road; but the situations and conditions are different every time you go through your route.

What makes your work harder?

People. People are getting more and more careless and irresponsible. They are more worried just about themselves, not about what is happening around them. I think that everyone who has worked with people has encountered their arrogance. Their questions on why something isn’t ready yet or why the trolleybus isn’t already at the bus stop waiting for them. And I think that that is the worst thing. This intolerance against the trolleybus.

What has been the worst situation you have experienced during your work?

Once, when I was working at night, right next to my trolleybus someone fired teargas and because the doors were open it flew into my cabin. Now I know what teargas is. I even had to stop and go clean my eyes because I couldn’t keep driving because I couldn’t see a thing.
Thankfully, I have never been in a huge accident like the one that happened on Aleksandra Caka Street. But because I am a big fighter for justice, I have had some complaints about my actions. One time I wanted the best for everyone, and told some woman to look after children because they were playing and pushing each other right next to the place where the trolleybus was meant to stop, and where it was dangerous to play around. Because of this warning, that woman wrote a two-page complaint about my “bad” behaviour.

It has been more than a month since the ticket price was raised. Has the number of people in public transport changed?

For a couple of days, while there were these protests about the public transport price rises, there were less people, but now everything is back to normal and nothing has changed. I don`t think that some pensioners will walk on foot to the market just because the ticket prices now are higher. They still will use public transport. Maybe there are more stowaways, but no huge changes.

Has the attitude of passengers towards the drivers changed as a result of the price increases?
No, not because of the price increases. But their attitude changed after the news in media when they said that the trolleybus driver was responsible for the accident that happened last year on Aleksandra Caka Street -  even though there has not been a trial yet. Drivers were called murderers and I heard other threatening words too. But now everyone has calmed down and everything is peaceful.

I have been told that you are not only a trolleybus driver, but also a mother of five children. How can you manage everything?

When you are in this lifestyle, you think that it is normal and can’t even imagine how it could be any different.
Of course, it would be nice to go home after work, relax a bit, maybe take up knitting, but I don’t have time for that. I am always running, always looking at my schedule and thinking where I need to be today. But I think that those who run are the ones who manage to do a lot of things and later can have everything back with huge satisfaction.

History should remain in the hands of historians, politicians should not interfere - Slovak foreign minister