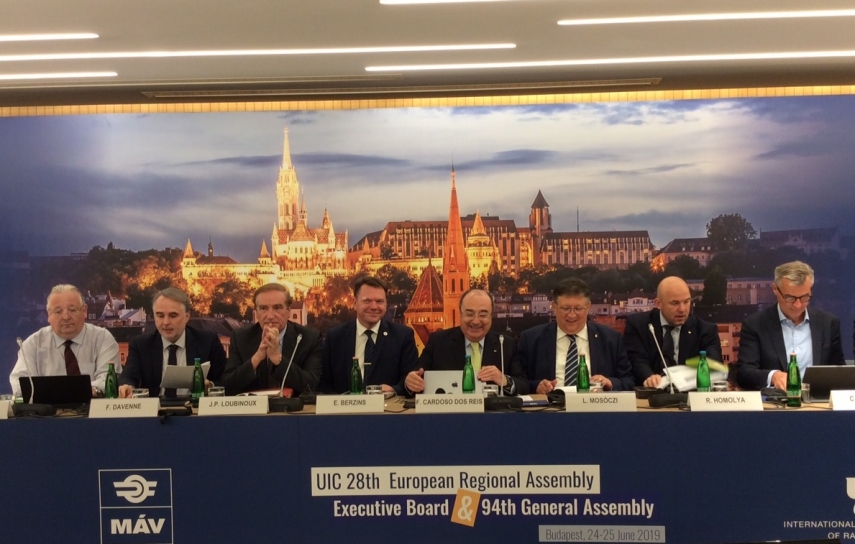 The European Regional Assembly of the International Union of Railways (UIC) is held in Budapest during which “Railway Technical Strategy Europe 2019” was presented which is a vision on development of modern railway system in Europe. A high-level discussion on railway sector development trends and challenges was held within the framework of this assembly, and LDz president, First Vice President of IUC European region and UIC Management Committee member Edvins Berzins also participated in this discussion.

The goal of “Railway Technical Strategy Europe 2019” is to define railway development trends that have formed, considering changes in the market and transport-related technologies and changes in the world – urbanisation, demography and other factors affecting the industry.

Edvins Berzins, the board chairman of state joint-stock company Latvijas Dzelzcels: “Railway infrastructure managers in Latvia, Europe and the whole world are actively seeking the most efficient ways not only to adapt to the rapid technological changes and integrate them in everyday processes, but also go ahead of the time and introduce those technologies that will become our everyday only in the near or far away future.

Railway technical strategy documents proves that IT integration in the railway sector will be one of the most topical issues on the agenda. Latvijas Dzelzcels is also working actively to become a modern, efficient and environmentally-friendly infrastructure and logistics group and we have a reason to believe that we are gradually approaching our goal.”

One of the solutions to facilitate development of a modern railway system is participation in "Shift2Rail" platform that is a large-scale private and public partnership initiated by the European Commission. The goal of this platform is to support better railway services in Europe, developing strategic technologies and solutions that will help to strengthen competitiveness of European companies and maintain Europe’s leafing position in the global railway market. Such public and private partnership has proved as a successful cooperation model in implementation of large innovation projects, therefore participants of the meeting were called to take active part in implementation of different large-scale innovation programmes.

During the General Assembly, UIC General Director Jean-Pierre Loubinoux and UIC European Regional President Francisco Cardoso dos Reis referred to the productive European Management Committee meeting held in Riga, underscoring the excellent organisation of the event and the high-level discussions held on the role of railway as the most environmentally-friendly land transport. The discussions held in Riga hosted by Latvijas Dzelzcels marked the beginning of a broader discussion on the issue also with other regions in order to find ways to promote railway as an environmentally-friendly transport at a global level.

VAS Latvijas Dzelzcels was established in 1919 and this year will mark its centenary. The celebration will include educational, cultural and business events and processes.