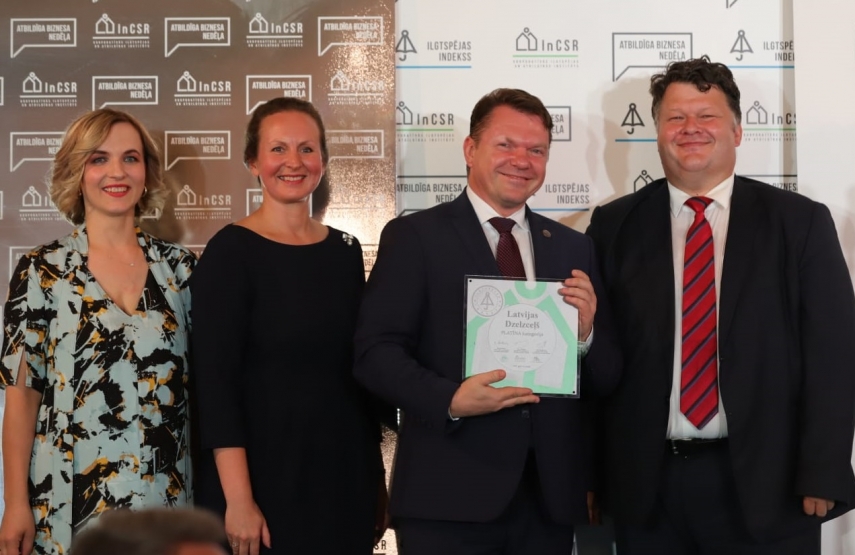 For the second year in a row, Latvijas Dzelzceļš (LDz) has received the highest Sustainability Index rating – Platinum Category, while four other LDz Group companies have been awarded bronze, silver and gold categories in the 2019 Sustainability Index.

SJSC Latvijas Dzelzceļš, the central company in the LDz Group, has been once again included in the Platinum Category this year, while experts’ assessment of the company has further improved as compared to last year when the company was first awarded the highest rating.

LDz also received a special award this year – the Free Trade Union Confederation of Latvia’s appreciation for promoting social dialogue. The collective agreement concluded by the LDz Group and the Latvian Railway and Transport Industry Trade Union is considered one of the best social security agreements for employees in Latvia. The document provides employees with a broad range of social guarantees, as well as various measures implemented by the employer to improve work environment as well as employee well-being and motivation.

LDz Chairman of the Board Edvīns Bērziņš comments: “Sustainability, good governance, OECD guidelines, activities of the management and supervisory boards at state companies that are independent of political priorities – discussions on sustainability and good corporate governance in Latvia have acquired a new, real meaning and expanded to new horizons. We at Latvian Railways are getting stronger thanks to the professionalism of our team, support from local and international partners, as well as a complete conviction that Latvian Railways is a company that works responsibly, transparently and sustainably.”

Subsidiary LDz Cargo has kept its Gold Category, while LDz Ritošā Sastāva Serviss Ltd., which last year was ranked Silver, has been awarded the Gold Category for the first time this year.

LDz Apsardze Ltd. was assessed for the Sustainability Index for the first time, joining the Silver Category companies, and LDz Loģistika Ltd. was awarded the Bronze Category.

Confirming its responsible attitude to resources, environment, society and stakeholders, LDz has drawn up and published the annual sustainability report for 2018, which provides an insight into the company's operations and financial performance, implementation of major projects, day-to-day activities at LDz, as well as public and international activities. The report has been prepared in accordance with the internationally-recognized GRI (Global Reporting Initiative) guidelines; the report has been unreservedly approved by an independent auditor – PricewaterhouseCoopers.

Last year, an important milestone was achieved in LDz development as the Group’s new strategic vision was presented. Also, in the autumn the Cabinet of Ministers of the Republic of Latvia approved the Indicative Railway Infrastructure Development Plan prepared by the Ministry of Transport, on the basis of which a multiannual agreement between the Ministry and LDz was concluded, which stipulates that the existing infrastructure amounts, quality and capacity will be maintained for the next five years, and that several investment projects important for competitiveness of the rail infrastructure will be implemented.

At the same time, in 2018 LDz continued to consolidate its positions in international markets and attract new cooperation partners by participating in various international fairs both in Europe and Asia. Cooperation was deepened with the existing strategically important neighbors – Russia and Belarus.

For the purposes of sustainable operations and future development, LDz continued work on the first phase of the railway network electrification project. Following the decisions made by the Cabinet of Ministers in 2017 that approved implementation of the first phase of the project in the direction of Riga, without the involvement of the state budget funds, in March 2018 a positive opinion of the Central Finance and Contracting Agency (CFLA) was received, and the project application was submitted to the European Commission’s JASPERS Independent Quality Review (JASPERS IQR) experts.

The Sustainability Report is integral part of the Annual Report and Consolidated Report of the SJSC Latvijas Dzelzceļš, which offers information on financial indicators at the company level and the Group level. The first sustainability report was prepared for the year of 2016, and LDz became the first logistics company in the Baltics to draw up reports in accordance with the internationally-recognized GRI guidelines.