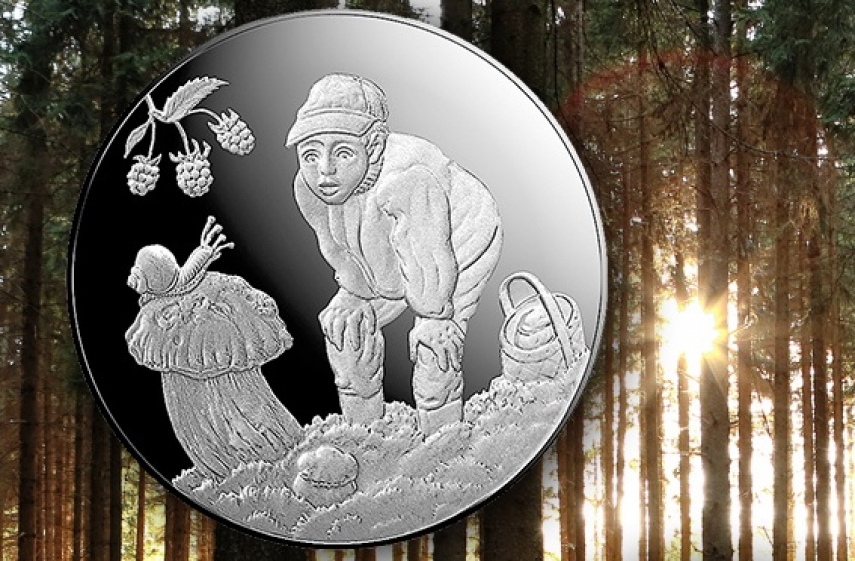 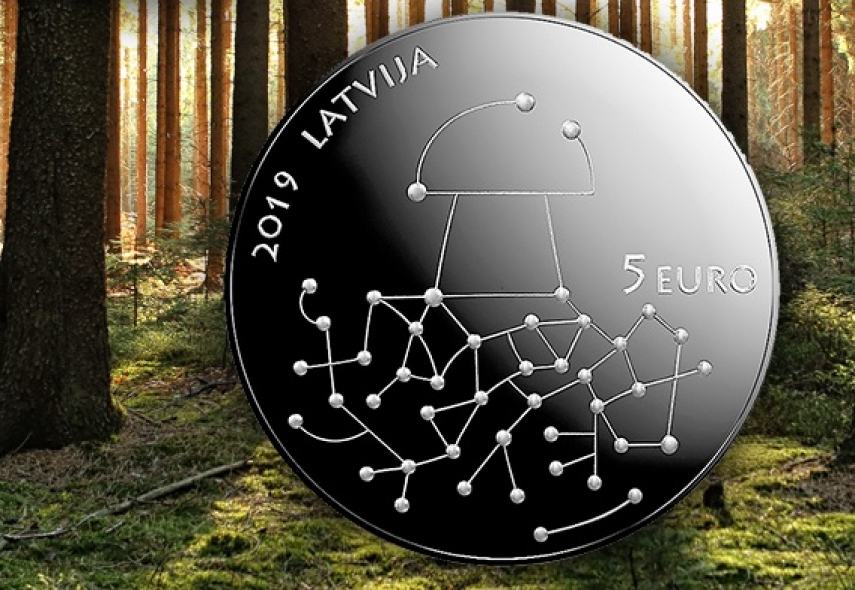 On Thursday, 17 October, Latvijas Banka is issuing a silver collector coin "Gifts of the Forest". The coin dedicated to Latvia's nature bears a message of Latvian values and traditions creating the sense of belonging to Latvia and uniting its people. The coin shows our respect to Latvia's forests, the gifts they provide as well as traditions related to forests, e.g. mushroom and berry picking etc.

Mushrooms is an old and large group of widespread organisms playing an important role in the nature: many wild animals use them as their food, while worms of insects live in the fruit bodies of mushrooms. The mushroom-picking skills have already been praised in dainas, the Latvian folk-songs. Grateful collecting of the gifts of nature, both mushrooms and wild berries, is an integral part of the everyday life traditions and the ethnic identity of Latvians. It is a special summer and autumn ritual in the sanctuary of the nature; it also resembles an instinct of a diligent squirrel who collects supplies for winter.

Over 70 thousand species of mushrooms have been documented in literature, but their classification has not been completed yet. In Latvia, more than four thousand species of mushrooms have been identified, including 51 protected and 33 poisonous species. Distribution of hallucinogenic mushrooms is prohibited by law. Approximately 270 mushroom species are edible, but mushroom pickers usually prefer 20–30 of them.

The graphic design of the collector coin "Gifts of the Forest" has been created by Edmunds Jansons (obverse) and Edgars Folks (reverse), whereas the author of the plaster model is Ligita Franckeviča. An interesting approach has been used in designing this coin: each side of it has a different author with his unique style. Obverse features a stylised mushroom with mycelium, designed by Edmunds Jansons. A drawing of a mushroom picker with a basket, a bolete with a snail on it, a small bolete in the moss, and a bunch of raspberries by Edgars Folks is depicted on the reverse.

Starting from 8.30 a.m. on 17 October, the new coin will be on sale online via e-monetas.lv, Latvijas Banka's website for purchases of collector coins and other numismatic products, and at the Cashier's Offices of Latvijas Banka at K. Valdemāra iela 1B in Riga and Teātra iela 3 in Liepāja. The building of Latvijas Banka in Riga will be open and the tickets from the queue regulator facility will be available from 7 a.m. The price of the coin at the Cashier's Offices of Latvijas Banka and via e-monetas.lv is 47.00 euro; the purchase limit for one buyer will be two coins. The maximum mintage of the coin is limited to 4 000. At this stage, only part of it has been minted, i.e. 3000 coins will be released on sale on 17 October. The coin was struck by Koninklijke Nederlandse Munt (the Netherlands).

The collector coin "Gifts of the Forest" is legal tender in the Republic of Latvia, yet the release of such coins in circulation is highly unlikely, as they are in fact works of art and are in special demand among coin collectors and other interested parties.