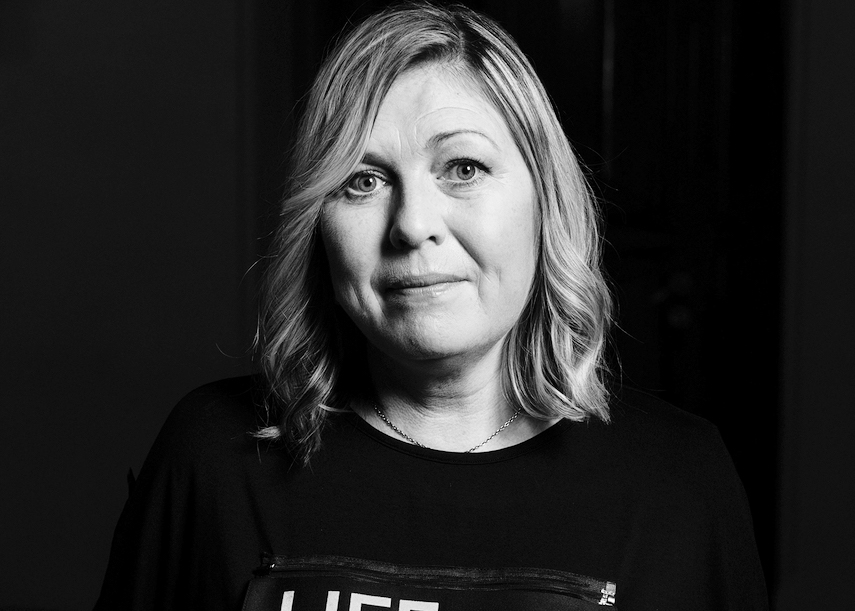 The former Estonian prime minister Mart Laar said that the world still avoids talking about the crimes of communism and that an international Hollywood hit film with renowned actors would draw attention to the issue and raise the world’s awareness of the bloody history and tragedy it wrought on people’s lives.

Ikstena isn’t interested in Hollywood, but her acclaimed literary work is being made into a film nonetheless. Armando Iannucci’s recent film The Death of Stalin, which is banned in Russia, captures the terrifying absurdity of a tyrant and life under Soviet terror, where the fear of being killed looms over every Soviet citizen every minute of every day.

Soviet Milk, which took the Baltics by storm, is however a story of human hope and love as it considers the effects of Soviet rule on a single individual. The central character tries to follow her calling as a doctor, but then the intrusive ominous apparatus of the Soviet state steps in, which deprives her of a professional future, her identity and finally of her relationship with her daughter. The state banishes her, and her sense of isolation increases.

Where The Death of Stalin portrays no human hope, at the core of Soviet Milk lies something far more positive, powerful and moving. This is love and the desire for life and the desire to live, despite being a soul-baring study of depression, intellectual frustration, and motherhood. Soviet Milk combines the events of life in a brutal Soviet Union with humanity and empathy.

Nora Ikstena is proving that Latvia can speak in a bold and original voice to international audiences. She’s been awarded the Order of the Three Stars for Services to Literature and the Baltic Assembly Prize. Soviet Milk won the 2015 Annual Latvian Literature Award for Best Prose.

Publishing is considered the largest creative industry in Latvia by turnover and number of employees. After the country regained independence in the early 1990s, the publishing sector was the first to be privatised, and the number of new titles has increased annually since then.

Along with Estonia and Lithuania, Latvia will be the featured countries at this year‘s London Book Fair‘s Market Focus between Apr. 10 and 12. The Baltic States “enjoy a rich and cosmopolitan literary history, complementing a fascinating contemporary cultural landscape,” notes Jacks Thomas, Director of The London Book Fair.

Nora Ikstena appears at the London Book Fair as Author of the Day on Wednesday Apr. 11 to discuss Soviet Milk. She recently spoke with The Baltic Times whilst on a book tour of Italy.

There’s a debate in Latvia at the moment about the Istanbul Convention on violence against women and domestic violence. Latvia is ranked 7th in Europe for the level of violence women experience. It’s been stated in connection with this issue that sex was a taboo subject during the Soviet occupation of Latvia, and is still so now. Everyone was frustrated during the Soviet times because there was no such thing as sex. Nobody knew how to talk about it.

I don’t see it that way. The situation was different and people were different. We have to remember that people lived under an occupational regime and this influenced ones whole life and approach to it. Personally, I consider an individual’s sex life as a very intimate private process. My very good friend, the Latvian film director Inara Kolmane, has in fact just concluded a wonderful documentary,  a co-production between Latvia, France, and Ukraine, called Sex and the USSR: A Double Life, which is an ironic-nostalgic look back at history, into the sexual experiment that the USSR attempted to implement and the people’s perceptions of intimacy and sexual matters in the Soviet Union. I think this will be an interesting study about the issue.

Your book Soviet Milk touches upon love which a mother is unable to give her daughter. Did people know what ‘love’ was and how to talk about it during the Soviet period?

Of course they knew what love is and what it means. My novel Soviet Milk in my mind is a story full of love, and the struggle for love. I think the mother in the novel loves her daughter a lot, so much so that she’s not prepared to give her mother’s milk because she doesn’t want her daughter to experience and go through the same difficulties that she herself has been through in her life.

Rosie Goldsmith, the broadcaster and reviewer of your book, stated that “Latvia is a country we have heard almost nothing about since its separation from the Soviet Union. Nora Ikstena is proving that Latvia is speaking in a bold and original voice.” Where did the inspiration for writing Soviet Milk originate? And why was the theme of love set during the Soviet period important for you?

I started thinking about writing Soviet Milk around 20 years ago when my mother died at the age of 54. This is a very personal story for me. I wanted to write it because I was constantly thinking about what a very complicated life my mother led. I personally feel like that she gave half of her life to me. I was being very honest in telling this story and it was a very emotional and hard process for me. And it turned out that for so many people in Latvia and also now in Great Britain, Italy, Hungary, Estonia, Lithuania, Sweden and many other countries that the message of the story has become important for them, and that it resonates deeply.

I certainly do. And the great interest in my novel is also proof of this. I remember a discussion I had 20 years ago in the United States concerning this subject. It was almost impossible to compare Nazi crimes with those committed under Soviet occupation. Now we see that both of these regimes were ruthless and brutal, as were Hitler and Stalin, the leaders of these regimes. So we need to continue to speak loudly about it.

The former Estonian prime minister Mart Laar said that the world still avoids talking about the crimes of communism and that an international Hollywood hit film with renowned actors would draw attention to the issue and make people more aware of this bloody episode in history. What would you say to a Hollywood film?

We have in fact already started making the film with the acclaimed European Latvian director Inara Kolmane. I’m not interested in Hollywood. Our intention is to make an outstandingly good film as a Latvian team. There’s also interest from numerous co-producers throughout Europe.

Latvia’s communist past could be considered part of the national memory. Are people in Latvia still afraid and don’t dare talk about the crimes of communism openly and to the full extent? How has Latvia and the Latvians healed themselves of communism? Does Soviet Milk offer an element of healing, and have the Latvians talked about the past openly and honestly?

I feel that my book offers a healing process for many readers, but I think that my generation still has and carries the trauma. And as a society we’re still not open and honest towards this period of our history. Latvia didn’t undertake the opening up of its KGB archives. We still need to work hard on all these things.

You chose to set your story during Latvia’s Soviet period. How did this add potency to the events surrounding the lives of the characters?

As mentioned previously, the novel is based on a true story. I was born in 1969. The Berlin wall collapsed in 1989. Nothing in Soviet Milk was chosen artificially and I still think that life is larger than fiction.

I was too young to have suffered from depression. But my parents’ generation certainly suffered. On the other hand, they lived the only possible lives they had. They loved. They had families. They had children. Life kept going on.

And what was the greatest harm that the system did to the psyche, soul and well-being of the Latvians?

The greatest harm was that it stopped the normal civilised development of Latvia for 50 years. In 1939 when Latvia was occupied by the Soviet Union [the first Soviet occupation of Latvia actually took place in 1940, TBT], Latvia was a very developed and advanced European country, both culturally and economically, as well as in so many other areas.

You’re participating in this year’s London Book Fair. How important is it for you to appear at international book fairs. And what are you planning in London?

I will be the ‘Writer of the Day’ at the London Book Fair. This is an extremely big honour not only for me but for all Latvian literature. It will involve some hard work as well including numerous interviews, discussions, and readings, but I take this as a duty.

At the beginning of Soviet Milk the mother runs away immediately after her daughter’s born. When she returns, she says she was afraid her milk would be poison to the baby. Why?

This isn’t only about a mother’s milk. It’s a metaphor referring to the poisoned milk of our homeland, which we didn’t have being under Soviet occupation.

Your book was recently translated into English by the Peirene publishing house in London. What other ways will you promote Soviet Milk around the world?

At the moment I’m undertaking a book tour of Italy, which involves readings and discussions in Rome, Pistoia and Milan. I then undertake a tour of Hungary and Estonia. Later in the year, during November, I begin a book tour of the United States which will see appearances in Seattle, Denver and Minneapolis. I’ll also be discussing the novel with university students during my trip.

Lithuanians invited to celebrate Easter by uniting in prayer via radio, TV, Internet