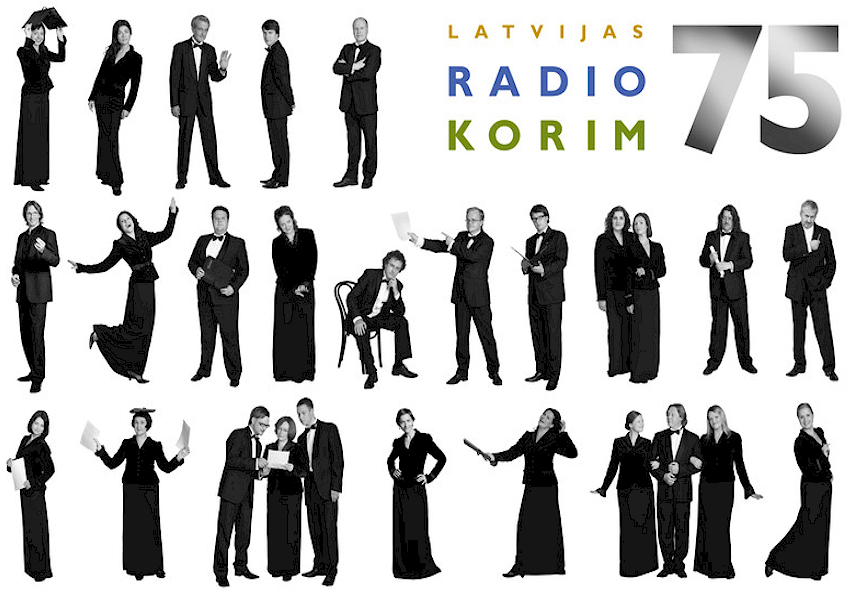 RIGA - It was fitting that, as part of their 75th anniversary season, the Latvian Radio Choir would perform this programme on this evening. One night after the celebration of Latvian Independence Day, the Radio Choir presented an innovative concert combining two contrasting nationalist cantatas by Latvian composers. And as Staro Riga lit up Latvia’s capital with creative installations, the Radio Choir made their own contribution with a compelling light design that turned this concert into a stunning theatrical piece.

Combined on the Nov. 19 programme were Janis Lusens’ “Tas Vards” and Martins Brauns’ “Daugava,” two cantatas composed on either side of Latvia’s re-established independence. Written in 2012, Lusens’ work for mezzo-soprano and rock ensemble sets the words of Aspazija, a prominent poet and social leader from Latvia’s first fight for independence. Together with her husband Rainis, the pair forms perhaps the most influential couple in Latvia’s history. The works of both poets have been widely performed throughout Riga in 2015; Rainis and Aspazija were born 150 years ago this year.

Rainis’ words are the focal point of Brauns’ “Daugava,” a cantata for choir and synthesizer that was composed in 1989. Brauns’ work has been widely celebrated throughout Latvia, as the cantata’s final movement (“Saule, Perkons, Daugava”) became a rallying cry for independence. The song is a consistent staple of Latvia’s important Song and Dance Festivals.
It is a not unsubstantial risk to intertwine two well-known works as Music Director Sigvards Klava did in this programme. The two cantatas come from vastly different sonic worlds; Brauns’ “Daugava” is synthesizer-heavy and reminiscent of mid-eighties musical theater, while “Tas Vards” combines the soaring melodies of art song with an edgy rock accompaniment.

It is a major accomplishment for Klava, the musicians, and light design team that the combined effect was as moving as it was. So impressive was the total programme that it is difficult to imagine Lusens’ or Brauns’ pieces separate from one another.

Mezzo-soprano Ieva Parsa shined as the star vehicle for Lusens’ cantata. Her varied choices in colour and dynamic range heightened the nuances of the score, and her movement through the simple staging felt graceful and unforced. Her counterpart in Brauns’ “Daugava,” tenor Janis Kursevs, made the most of a small solo role with his penetrating stage presence. As the object of affection for Parsa’s Aspazija he was intense and focused. Separated by a river of lights mounted on tripods, the pair’s chemistry was palpable.

The Latvian Radio Choir was impressive as they offered a commanding interpretation of Brauns’ dissonant but not complex score. It was refreshing to hear the choir in this circumstance as they are so often occupied with the most difficult contemporary music in the repertoire. Klava allowed them to sing with power while maintaining balance and clarity.
Klava should be applauded for his role as creative mastermind in this programme. His programme notes emphasized the differences between Rainis and Aspazija — Rainis supplying the political fire for a revolution while Aspazija served as the nation’s soul and conscience. Klava’s research and insight into these great Latvian figures was evident in the performance, as the programming and staging enhanced the alternating texts.

The simple stage and light design by Paula Plavniece and Janis Snikers added a powerful visual element to the excellent musical performance. One hopes to see more of this creativity in the future at the National Library’s Ziedona Hall.
Also of note in this performance was the participation of the composers, as both Brauns and Lusens played at the keyboard for their respective works. Brauns was particularly enjoyable to watch; he was often moved to join the choir’s singing as he played his most popular work from memory.

The Latvian Radio Choir will finish its 75th anniversary year with concerts in Rezekne, Jurmala, and Riga. Their European Christmas program can be heard in Riga on 30 December.