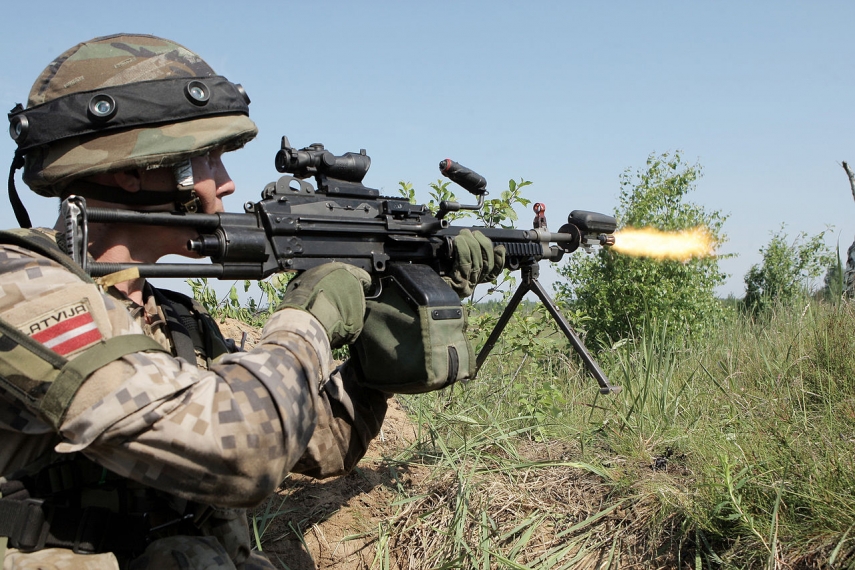 Defense Minister Artis Pabriks (For Development/For) stressed during the ceremony that this was a very important development for the security of Latvia, the rest of the region and NATO. For the first time in history, headquarters of a NATO division will be located in the Baltic countries, said the minister.

He said he was very pleased with the achievement, and thanked Denmark for being a staunch supporter of the freedom and security of Latvia.

Pabriks also thanked Estonia, reminding that it had played a crucial role in Latvia's freedom battles. "Our freedom depends on your freedom, and vice versa," said Pabriks.

Danish Defense Minister Claus Hjort Frederiksen emphasized that little green men appeared in Crimea five years ago, and two weeks later Russian President "welcomed" Crimea into Russia. The entire world was frustrated and upset, and Denmark's presence in the Baltics is to avoid such "surprises" in the future and demonstrate NATO's unity, said the minister.

Estonian Defense Minister Juri Luik said in turn that it was of utmost importance that with the establishment of Multinational Division North a military command level focusing specifically on the defense of Estonia and Latvia was added to the NATO force structure. Denmark has always understood the Baltic countries' security concerns, as during the Cold War it was one of the NATO border states like the Baltic countries and Poland are now, he added.

According to the Defense Ministry, the mission of HQ MND N is to enhance the defense capabilities of Baltic states, as well as contribute to NATO's collective deterrence and defense efforts through the command element based in the Baltics. HQ is tasked with defense planning, military training, planning and coordination of common projects. It will promote the compatibility of forces from participating countries and their interoperability in scope of common defense initiatives.

The headquarters of Multinational Division North will be an efficient and combat-capable command unit, which will ensure joint command over division-size units, including units of the headquarters' framework nations and NATO's Enhanced Forward Presence battle groups currently deployed in the Baltic states. Division command will initially be comprised of officers from all participating countries - Denmark, Latvia and Estonia. Headquarters may be expanded with officers of other interested framework countries.

Latvia is contributing military officers and administrative personnel to the headquarters, as well as the necessary infrastructure of the Adazi military base.

Hosting of MNDN HQ will ensure stronger national defense of Latvia. It also confirms Latvia's commitment and readiness to get more actively engaged in the strengthening of collective defense and assurance of more efficient military response of NATO in scope of its long-term aspirations for greater readiness and capacity to defend its member states, the Defense Ministry said.