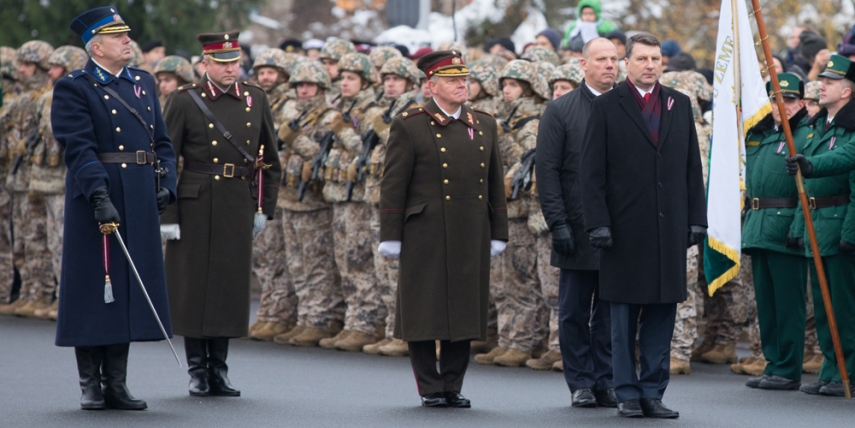 RIGA - Latvia is as strong as our readiness to defend it, President Raimonds Vejonis said in his address during a military parade that was held in Riga in honour of Lacplesis Day, which Latvia marks on Nov. 11 to remember the soldiers that it lost in the 1919 Freedom Battles.

Addressing the public, the president said that every individual can offer his or her contribution to national defense. “Each resident of Latvia who joins the Home Guard, everyone who involves their children in the activities of the Youth Guard, provides an invaluable contribution to Latvia’s security,” Vejonis said.

Although the allied forces who are ready to defend Latvia play a vital part in Latvia’s defense, citizens themselves need to be prepared to fight for the country, just as in 1919 when allied forces also contributed invaluable support to Latvian troops during the Freedom Battles, the president said.

He also applauded Latvian soldiers’ professionalism, which has been internationally recognised, and noted that international partners have always been able to rely on Latvia’s armed forces. “I am proud that experienced foreign soldiers have been able to fight shoulder to shoulder with our men in life-threatening situations in the battlefields of Afghanistan and Iraq,” Vejonis remarked.

The president also stressed in his speech that on Lacplesis Day, Latvia has to remember its heroes who 97 years ago successfully protected Latvia’s newly-achieved independence.

At the end of his speech, the president addressed the National Armed Forces, Home Guard, and Youth Guard, thanking them for their selfless service and bravery. “You are the symbol of our nation’s strength and courage. Only together we are an invincible force,” Vejonis said.