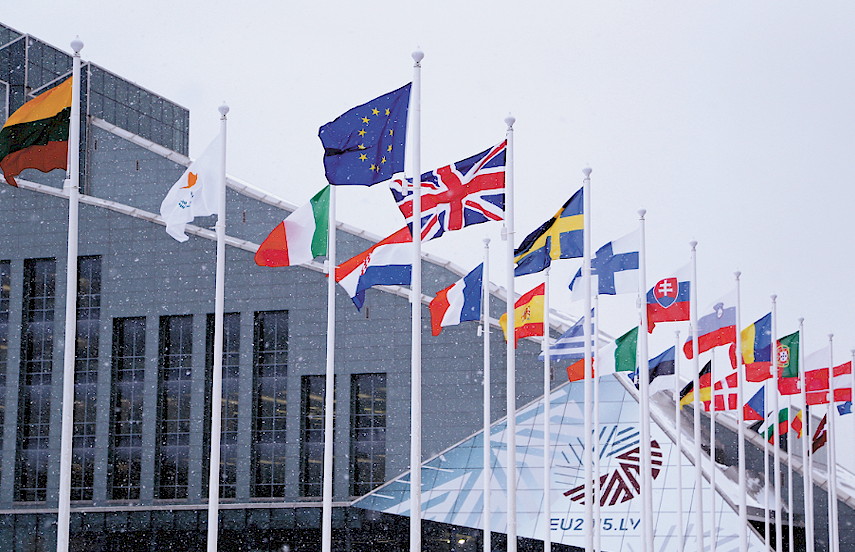 Flying the flag for the EU: Latvia to set Europe’s agenda for next six months.

RIGA - At the beginning of this year, of this year, for the first time in its history, Latvia took on the rotating Presidency of the Council of the European Union. Though the post is rotational rather than an appointed or elected one, Latvia will be the EU Council chair for the next six months.

The priorities of this EU Presidency, which was handed over from Italy at the start of January, are to create a “competitive, digital and engaged Europe,” according to the Latvian presidency’s official website. Though the effectiveness of the nation’s presidency when it comes to achieving its goals will depend to a large extent on the compliance of the other members of the Council, and the existence of a belief among all other member states that Latvia is acting for the EU’s common good, rather than for its own narrow national interests.

Geopolitical issues can also get in the way of a successful presidency, as was seen during the Lithuanian EU Council Presidency, when the historic centrepiece of their tenure, the Vilnius Summit, was scuppered by Ukrainian President Victor Yanukovich’s decision to step away from signing an important free trade pact with the EU due to political pressure from Russia.

During the Latvian Presidency, around 200 events will be held in Latvia, including high-level political meetings. One of the main events will be the Eastern Partnership Summit in Riga, and its related meetings (the Business Forum, Civil Society Forum, Media Freedom Conference and Youth Forum, etc.). There will also be 10 informal meetings of EU Ministers and the Asia-Europe Meeting (ASEM) of Ministers for Education.
There are plans to organise the Digital Agenda Assembly, European Conference on Standardisation, Social Partners Forum, eHealth Week and other key EU meetings.

Finance Matters
During an ECOFIN meeting in Brussels during December, Finance Minister Janis Reirs said that the implementation of the investment plan unveiled by European Commission President Jean-Claude Juncker will be one of the main tasks of the Latvian EU presidency.
Juncker revealed a 315 billion euro investment scheme to “kickstart” the EU’s stalling economy, after global concern about its health in November and one of Latvia’s first tasks as president will be to make sure this gets implemented effectively.
‘’I would like to thank the European Commission and the Italian presidency for all of their hard work. The next six months will be a huge challenge and responsibility for us to move forward with Juncker’s announced investment plan. In order for this to succeed, close cooperation between all the involved side will be necessary, as well as a constructive dialogue with all of our partners,’’ the finance minister said.
At the same time, Reirs pointed out that the investment plan must be in accordance with the needs of all EU member states, and that projects submitted by smaller members should not be turned down in favour of projects submitted by larger members.

The first dilemma - Victory Day
The imperative to put EU interests above national interests (at least ostensibly) during Latvia’s six month presidency has already led to an awkward situation. Russia’s President has invited Latvian President Andris Berzins to Moscow’s Victory Day Parade on May 9 and for historical and political reasons this has caused issues in Latvia.
European Parliament member Artis Pabriks, a former foreign minister and current member of Unity Party, the leading political party in Latvia’s ruling coalition, has claimed that President Andris Berzins should turn down the invitation to celebrate in Moscow the 70th anniversary of the defeat of Nazi Germany - if the situation in Ukraine does not improve.
Pabriks compares the situation today with the one President Vike-Freiberga faced 10 years ago - when there was a border agreement to sign.

“Back then we thought that relations with Russia were improving. Now we see a lengthy period of inappropriate Russian moves in the international arena,” Pabriks pointed out.
The MEP spoke reacting to comments made this morning on LNTV by Minister of Foreign Affairs Edgars Rinkevics (Unity) that in deciding whether the president should or should not attend, “the context of the invitation must be kept in mind, and the fact that Latvia is the presiding country in the EU Council.” He also advocated a unified EU stance on this issue, internal discussion in Brussels.

In deciding whether Latvian President Andris Berzins should attend Russia’s Victory Day celebrations in Moscow on May 9, the context of the invitation, as well as the fact that Latvia has become the presiding country of the Council of the European Union, ought to be taken into consideration, Foreign Minister Edgars Rinkevics (Unity) said in an interview with the LNT show “900 sekundes”.
Rinkevics declined to answer whether Berzins should visit Moscow for the May 9 celebrations, as he would like to discuss the matter with the president first.

“I would like to note that the context of this matter ought to be taken into account as well. We are the presiding country, therefore, any choice of decision will be judged in this context. Of course, [..] at the moment, I would really like to see the EU take a joint position. Before any decisions are made, the EU ought to discuss this matter as well,” Rinkevics said.
He added that several state leaders have already said they would not participate in the Victory Day celebrations in Moscow. They had every right to make such a decision, “however, let us not forget that in this specific situation, we are also the presiding country of the EU and, of course, the recent events, I believe, have made it difficult for several state leaders to attend these events, and this, too, must be considered.”

As reported, Russia is preparing for large-scale celebrations to commemorate the 70th anniversary of the victory over Nazi Germany in World War II, and Latvian President Andris Berzins has been invited to the event as well.
When asked whether the president plans to attend the ceremony, the president’s press secretary Liga Krapane told LETA that “there is enough time to assess the course of situation and to eventually make a decision.”

U.S. President Barack Obama was invited to the said ceremony as well, however, he declined the invitation. The press service of the Lithuanian president has informed the media that Lithuanian President Dalia Grybauskaite, who was also invited to Moscow, will not be attending the event either. North Korean leader Kim Jong-un has been invited to the event also.