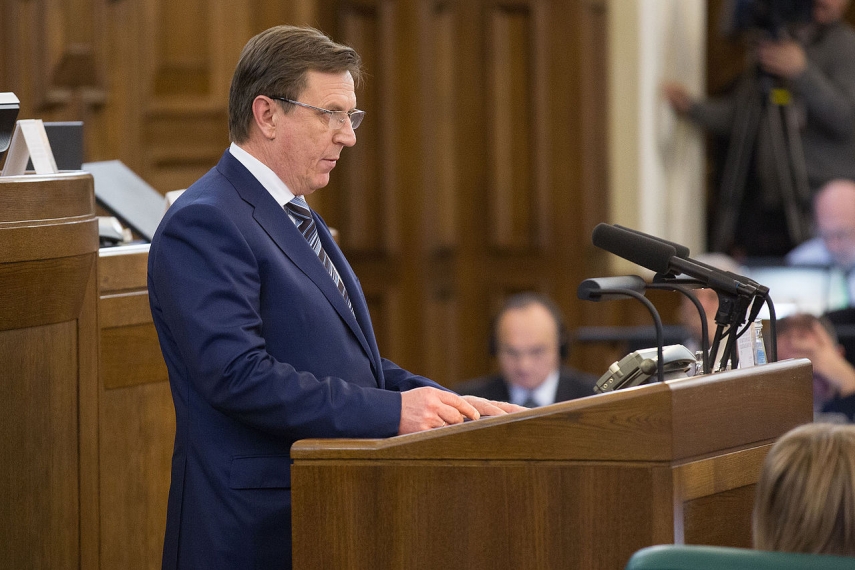 RIGA - Now that the Baltic prime ministers have signed the trilateral agreement on Rail Baltica European-gauge railroad project’s implementation, Poland, too, has to be involved in the project more actively, Prime Minister Maris Kucinskis (Greens/Farmers) said in an interview with LNT commercial TV channel this morning.

In Kucinskis’ view, Poland’s involvement in the project is now the most important objective, which is why the Latvian premier has already had meetings with Polish politicians and intends to step up these negotiations. In his words, the Polish politicians back the plan in principle, but it is necessary to raise more EU funding.

The signing of the Rail Baltica agreement on Tuesday became a turning point, as the three Baltic states demonstrated that Rail Baltica is not just a plan, but a realistic and implementable project, Kucinskis said.

The prime minister hopes that the project’s further implementation in Latvia will be smooth, as the project has both political and growing public support because this railway line can become one of the alternatives to the Russian direction where freight deliveries have been dropping lately. Latvia has presented the project also to Chinese representatives, pointing to opportunities provided by the planned cross section of rail tracks of two different gauges.

As reported, Kucinskis, Estonian Prime Minister Juri Ratas and Lithuanian Prime Minister Saulius Skvernelis in Tallinn on Tuesday signed the Rail Baltic agreement, which sets out the deadlines, the route and several technical details of the new railway interconnection.

The agreement was signed during a meeting of the Baltic Council of Ministers, which is taking place in the Estonian capital.

Kucinskis said after the signing of the agreement that a successful and timely completion of the Rail Baltica project is a common strategic interest of all three Baltic states and the broader region. "I am glad to note that lately progress has been achieved on advancing the project - agreements on a procurement framework and the project's supervision have been reached and are being implemented, and on the national level, there are agreements on the route and border-crossing points. They have to be implemented without a further delay," Kucinskis said.

The agreement has to be ratified by the parliaments of all the three countries.

The Rail Baltic agreement determines the general technical parameters and route of the railroad as well as the construction timetable. An intergovernmental agreement is necessary because there are some matters which companies cannot regulate under the Rail Baltic joint venture shareholders' agreement, the Estonian government's press service has previously said.

The total cost of the works on the Estonian territory is projected at 1.3 billion euros of which Estonia's contribution is 250 million euros. Up to 85 percent of the Rail Baltic project funding will come from the Connecting Europe Facility.