Klaipeda Port CEO Algis Latakas: “Ambitions and goals always have to be big” 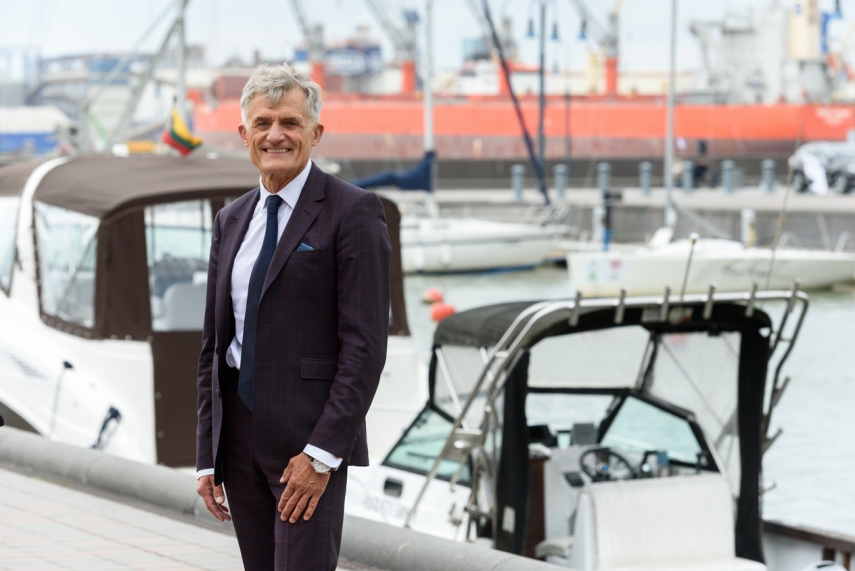 Photo: Algis Latakas is CEO of the Klaipeda State Seaport Authority that manages the Port of Klaipeda

Klaipeda Seaport, the locomotive of the Lithuanian economy, is one of the few ports maintaining a growth tendency compared with other Eastern coast Baltic seaports. And the first half-year of 2021 has been auspicious for the port too, despite the coronavirus gloom and the uncertainty about Belarus freights at the port. The Baltic Times Magazine sat down in early August with Algis Latakas, CEO of the Klaipeda State Seaport Authority that manages the Port of Klaipeda, to catch up with the latest developments at the port.

You’ve been at the helm of the port one year. Did you grasp the nitty-gritty of all the operations? Are there any questions you may not know answers to?

I am not new in the port as my previous jobs were closely related to the activities of the port. So I was lucky in a way not having been compelled to spend extra time in learning what, say, the terms “port gates”, “quay“ mean and figuring out why the port channel has to be deepened and so on. But one of the issues that bothered me in a way, as someone who had worked in private sectors previously, was not having a clear answer why some decision-making and why some processes sometimes take so long. But I got used to that too, I’d say – adapting is part of my personality.

The Port of Klaipeda has set out on a very ambitious path – by 2040 becoming the most important hub of transportation and industry on the Eastern coast of the Baltic Sea, with the cargo amount expected to reach 100 million tons by then. What are the expectations based on?

I am convinced that ambitions and goals always have to be big. Maybe even bigger than we can realistically handle them, as only that drives us forward.

The number you mentioned was chosen having evaluated the port’s development dynamics and prospects, the markets and the other ports nearby and the potential of the Klaipeda region and the Lithuanian economy on the whole.

But not the tons or other quantities are the most important, to me at least. As the world is rapidly changing, sustainability is becoming one of the most important components of the development of any business, including our port. We must be not just sustainable and flexible and economically viable throughout, but also environmentally and socially responsible.

This has become a new norm, and it falls well with my vision as the CEO. When it comes to being eco-conscious, the Port of Klaipeda has prepared a far-reaching long-term programme – we are definitely on the course of becoming a green port.

To get prepared for that, the Port is carrying out a series of evaluations and auditing – all provided by reputable independent experts – to assess the real situation we have and see what needs to be done to achieve the goal.

As we live in an era of cutting-edge innovation, digitalisation, the need for sustainable development is indeed leading to huge changes. Flexibility becomes one of the most important features of a successful business, so the contours of our vision can change.

Sustainability, sustainable development is not just a suddenly popular concept.

The total value created is starting to be measured in this respect, which means that, in the case of sustainable activities, perhaps in the future 80 million tons of cargo will create the same value as 100 million tons.

The potential of the Port of Klaipeda is indeed big – not only for the Klaipeda region, but for the entire Lithuanian economy too.

The year 2020 was recorded in the history of Klaipeda Seaport as the most successful year in the entire life of the seaport. According to the preliminary data, 47.74 million tons of cargo were stevedored in Klaipeda Port last year. Is the year of 2021 on the course of smashing the record?

Indeed, the last year was record in terms of the stevedoring volume in the port. I regret a little that we failed to hit the landmark 50 million tons mark. But like in sports, breaking records is much harder after you just do it, especially for the second consecutive year.

The Port of Klaipeda looked good last year not only among the closest Eastern Baltic ports but also in all of Europe. Our strength lay in diversification of cargoes, i.e., the port is suitable for stevedoring of any type of cargo.

This allowed maintaining good results and overtaking the competitors, who are loading just cargoes of one or several types.

Another important factor was long-term and continuous investments into the port’s infrastructure and technological development of terminals. Klaipeda has been working on this consistently.

The best ever result was achieved last year even in four categories of cargoes: the biggest growth was recorded in the segments of fertilizers, grains, ro-ro, and liquefied natural gas (LNG). The stevedoring of grains grew the most – when compared to 2019, one third more grains was loaded last year. The stevedoring of fertilizers also increased significantly – by 12 percent.

Approximately 6 500 vessels called at Klaipeda Port last year, i.e., some 5 percent less than in the year before. However, not even a single cruise ship was not able to come to Klaipeda in 2020 because of the pandemic.

Looking forward to the remainder of this year, the stevedoring remains at the same level as it was last year – some of the months this year have even produced better results, I mean on year.

It may be too early to say how the year till turn out, but the results of the performance during the first half of the year are really encouraging – the port averaged 3.4 million monthly tons in stevedoring in the first half of 2020 and the numbers a year ago stood at 3.6 million.

Owing to unimpressive June, we were just 0.2 percent behind the record-setting course at the half-year mark, compared to the first half-year of 2020.

Let’s see what happens during the remaining stretch of the year, but I am optimistic – partly due to the good forecast of the crops season. Notably, grain stevedoring takes up around 10-12 percent, or ca 4.5 million tons, of the whole pie.

However, even a larger part, one-third, belongs to Belarusian freights at your port. Are you concerned that, with the new EU sanctions against Belarus going into effect, it can be just erased or reduced significantly?

Indeed, the number is right – in fact, it was 32 percent last year, and it excludes some of Belarusian cargo with their unclear final destination.

It goes without saying that the Port of Klaipeda is very sensitive to any changes in the Belarusian cargo volume.

Speaking of the sanctions, the impact is double. Following the decision of the embattled Belarusian governement last year, a part of oil cargos was already directed towards the Russian Baltic ports, Saint Petersburg and Ust-Luga, – Russia has long insisted that all east-bound shipments go through these ports. The loss of our port from such oil shipments comprised around 2 million tons.

The US sanctions against 9 Belarusian companies earlier this year were not effectively tangible to the Klaipeda port, but the latest new sanction package by the European Union in July raises certain questions and we do not have answers yet.

If things changed for worst in the regard, the port would sustain a palpable loss – I have to be honest, and it would take time to adapt to the new reality. But the clear advantage Klaipeda port has is its diversification – other cargoes would eventually make up the loss.

Just recently we learnt that MSC, a major leader in global container shipping, has chosen Klaipeda port as its hub for its containers bound to India and Pakistan.

Lithuanian media has reported about the plans by Lithuania and Ukraine to enhance their marine economic relations through their respective seaports. Can you please elaborate on that?

Our port seeks to explore every possibility and, indeed, Ukraine has big potential.

Although the country has its own seaports, in some cases it would rather use the northern ports, ncluding ours, for hauling or fetching cargoes.

In the instance of Ukraine, getting Ukrainian freight to Scandinavia through Klaipeda is cheaper and faster. I believe Klaipeda can become Ukraine’s northern gateway once the potential is unravelled.

In July, the Lithuanian minister of Transport (Marius Skuodis) and his Ukrainian counterpart met in Klaipeda and discussed cooperation between the countries in the transport sector and possible new projects.

The countries have reiterated their intent to strengthen cooperation in the areas of railway and transport digitalisation, as well as to increase the capacity potential of the seaports of both countries.

During the study visit, the Ukrainian Minister was introduced to the opportunities and capacity of Klaipeda State Seaport and JSC Lithuanian Railways.

Speaking figuratively, to have a passenger stop at your station, you have to make certain things attractive – be it the route, the service and et cetera. The same applies to ports.

Some of the countries that we eye working with, like Kazakhstan, Turkey or above-mentioned Ukraine, may seem to be too far, but, under certain circumstances, to draw a parallel with the comparison of the station, their companies do find the Port of Klaipeda very attractive.

Klaipeda Seaport has announced plans of 400-million-euro investments into the port’s infrastructure by 2024. What will be done?

Indeed, in the next 4 years, it is planned to invest around 400 million euros in the Port of Klaipeda.

It is planned to allocate more than a half of these funds to the expansion of the harbourage, the repair and construction of quays and the reconstruction of wave breakers. The latter will improve the security of maritime transport and contribute to the implementation of environmental measures.

The implementation of the projects will grant a qualitative advantage to the port. Such plans have been set in the strategic operational plan approved by the State Enterprise Klaipeda State Seaport Authority, which operates the port.

Amid the changing market, the port’s infrastructure must be constantly oriented toward the improvement of the capacity of the port and the security of maritime transport.

The evident global tendencies clearly show that to ensure the effectiveness of the shipping business we need to accommodate larger ships.

During the scheduled period, it is also planned to expand the port area up to 70 hectares.

Synergy of the state and the port is key in ensuring efficient and viable development of the Klaipeda port.

We aim to develop the port constantly thinking about the added values it creates for all businesses – be it the expansion of the activities of the shipyard situated in the port, building a new modern dock for ship repairs or building a facility to assemble wind power farms, which someday may show up in the sea.

In a word, the added value would be created not through expanding the stevedoring capabilities, but through the new, marine-relevant economic activities, which would also mean more jobs, more tax-payers and et cetera.