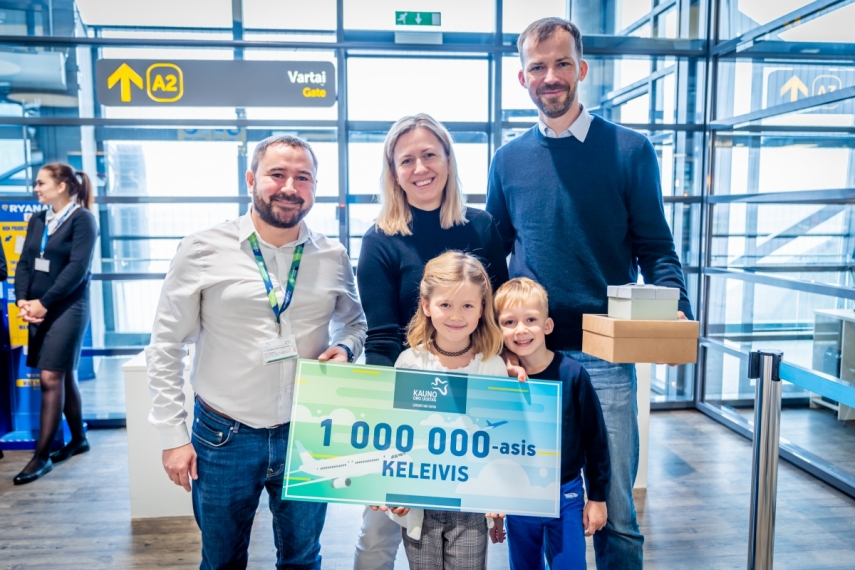 The country's second-largest airport has served one million passengers two months earlier than last year. This was mainly due to the newly introduced routes and charter flights. As 2019 is coming to an end, it has been noted that, in terms of the number of passengers served and the number of routes offered, this has been the best year in the history of Kaunas Airport, and next year preparations are underway for further expansion.

The millionth passenger at Kaunas Airport was serviced on November 4 and travelled to Eindhoven with Wizz Air. Such a passenger was recorded two months earlier than last year. This, according to Kaunas air gate manager Karolis Matulaitis, justifies that 2019 is exceptional in the history of the airport.

“The growth of our airport is clearly visible even internationally, and this year the name of Kaunas Airport has been consistently popular in the international media among the fastest growing airports in Europe. In Q3 we recorded 16 percent growth compared to last year, we estimate that for 6 months we have exceeded 100 thousand passengers and the largest number of travellers was in August - as many as 115 thousand”- notes K. Matulaitis.

According to the manager of Kaunas Airport, this situation is completely new. Until this year, the monthly 100 thousand passengers figure had not been recorded, and this year it has become almost routine. The new routes to Italy, opened last autumn, as well as flights to Cologne, Nuremberg and charter flights at Kaunas Airport, were the main contributors to this.

This year, Kaunas Airport is expected to move closer to the all-time high passenger figure recorded in 2017. Then for about a month Kaunas was the main air gateway in the country, which also served the passenger traffic of Vilnius Airport. In that year, almost 1,2 million passengers flew using Kaunas Airport.

Directions for tourists and business travellers

2019 is also important for Kaunas Airport due to the developed map of directions. Currently, 27 regular directions from Kaunas allow passengers to reach major and strategically important European cities. Directions are made so that traveling from the temporary capital can be used for both leisure and business purposes.

“The passengers of Kaunas Airport can reach the most important cities of Norway or Great Britain, there are also long-awaited directions to Germany, which are important for us due to arriving German tourist flows”- K. Matulaitis notes.

Last year, the Polish airline LOT started commencing flights from Kaunas Airport, becoming the first non-low-cost airline flying from this airport. K. Matulaitis emphasizes that more than a year later, LOT flights to Warsaw are successful, providing travellers with connections to all of Europe.

Last summer the airport began offering charter flights from Kaunas using with charter companies. According to K. Matulaitis, the residents of Kaunas region accepted this offer very favourably and actively used the opportunities to travel to warm-climate countries.

During the three quarters of this year, 7,4 thousand flights were conducted in Kaunas, which is respectively 4% more than last year.

The main goal for the upcoming year at the country's second-largest airport is to maintain existing flight directions, offer new ones and continue to grow passenger traffic. K. Matulaitis notes that in 2020 Kaunas Airport will become a place of significant changes for passengers.

“This year we have carried out car park replacement works and installed new parking lots. Next year, we will continue the expansion and implement other construction work. Aircraft service hangar will be built by “MAAS Aviation”, which is the world's largest aircraft painting company”, says the air gate manager.

The extension of a fire station will soon be built at the airport, but the most noticeable change for passengers will be the expansion of the passenger terminal, which aims to create better throughput and possibilities of servicing more aircraft. The operation of the air gate will continue during the planned changes, which will provide maximum comfort for travellers.

Kaunas Airport is part of the Lithuanian Airport Network, which operates three airports in Vilnius, Kaunas and Palanga. During 2018 they served 6.3 million passengers and conducted 61 thousand flights.