Kaljulaid in Lithuania: Co-operation of Baltics is guarantor of region's strength 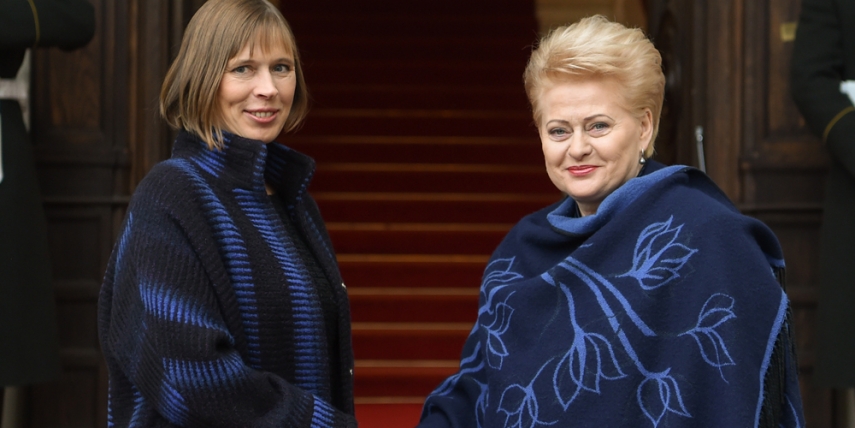 Official meeting of Presidents Kaljulaid and Grybauskaite [The Office of the President of the Republic of Lithuania, Robertas Dackus]

TALLINN - Intense co-operation between the Baltic nations will safeguard the region, Estonian President Kersti Kaljulaid said in the Lithuanian capital Vilnius on Oct. 26.

"Lithuania is a good neighbour to Estonia, a close partner in the European Union, and an ally in NATO. Our region's strength is ensured by unity of the Baltic countries on key topics such as security and energy independence," Kaljulaid stated after talks with her Lithuanian counterpart Dalia Grybauskaite.

The two presidents discussed the future of the EU, the Ukraine-Russia conflict, defense co-operation of the Baltic nations, energy independence, the migration crisis, Eastern Partnership, and Brexit’s effect on the EU, spokespeople for the president's office disclosed.

Guaranteeing the safety of Europe is a fundamental challenge both due to Russia’s aggressive behaviour and the increasing threat of terrorism. "One of the mainstays for strengthening the security of our region is co-operation among the Baltic countries, including by making an input to joint projects that ensure energy independence. Considering the global events, this is increasingly important for our region," Kaljulaid noted.

Kaljulaid and Grybauskaite also discussed Rail Baltica’s future as a significant regional project. According to the Estonian president: “This is an initiative that will help to better still interconnect the Baltic countries with one another on the one hand and connect the countries of our region with the rest of Europe on the other. Moving forward with it quickly is in the interest of all of us.”

The two heads of state supported the same positions concerning the migrant crisis. "We have to focus on the elements that unite the member states, not the ones that divide them. Countries must display solidarity in fulfilling the European migration plan, while increasing the efficiency of the EU external borders and working together with third countries to solve the root causes of migration," Kaljulaid said.

The trip to Lithuania was the third get-acquainted visit for Kaljulaid since she took office in early October. She travelled to Finland and then to Latvia last week and is expected to visit Poland next week.