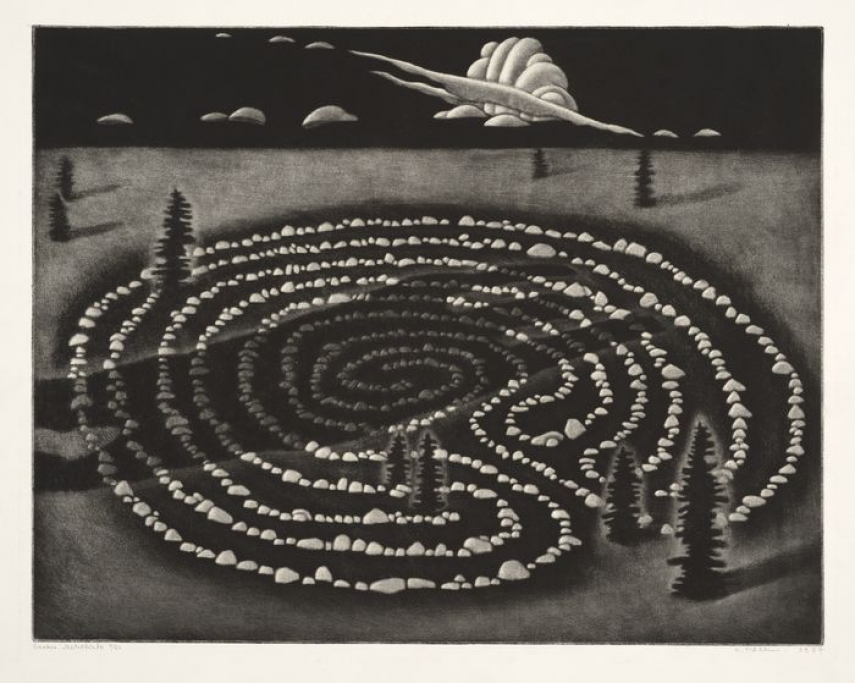 On Friday, 8 March, the Saku Municipal Museum of Modern Art in Nagano Prefecture, Japan, opens an exhibition of the Estonian artist Kalju Põllu’s graphic art, which has been compiled to celebrate the 100th anniversary of the Art Museum of Estonia.

The display is a suggestive overview of the ancient world-view, legends, beliefs and sense of nature of the forefathers of Estonians. The exhibition is a collaborative project between the Art Museum of Estonia and its Japanese partners: the Okuni Shrine, the city of Saku and the Saku Municipal Museum of Modern Art. In the past year, the exhibition was on display in the Okuni Shrine; the present exposition of Kalju Põllu’s oeuvre in the Saku Municipal Museum of Modern Art is nearly a third larger.

Kaljo Põllu (1934–2010) was one of the most outstanding Estonian artists, and in his works of impressive visual language he interpreted the beliefs and ancient myths of Finno-Ugric and Nordic peoples. As a pioneer of theoretical innovations in artistic thinking, an art lecturer and a leader of scientific expeditions to investigate Estonian and Finno-Ugric national heritage, he deeply influenced the Estonian art scene. Using the suggestive power of the mezzotint technique, the artist, with his unique style, created voluminous series of graphic sheets: Ancient Dwellers, Kali People, Heaven and Earth, Estonian Landscapes and Enlightenment. A selection of works from these series forms the central part of the exhibition in Japan. Another theme running through the works created in the second half of the 1980s, before the regaining of Estonia’s independence, is old proverbs. In his works, Põllu told stories about his ancestors’ beliefs and legends, relations between gods and people, the creation of the world, mythical totem animals and the might of nature. Traits similar to Estonian mythology and relations with nature, which formed the basis of inspiration for Kaljo Põllu, are also revealed in old Japanese beliefs.

The city of Saku in Nagano Prefecture has been in friendly relations with Estonia and our local town of Saku for more than ten years. The city boasts an active Japanese-Estonian Society and its inhabitants show great interest in Estonian culture. In connection with the 2020 Olympic Games in Tōkyō, the city of Saku is the official partner of the Estonian Athletic Association in organising a preparatory training camp.

The exhibition is accompanied by a richly illustrated catalogue in Japanese and in English.