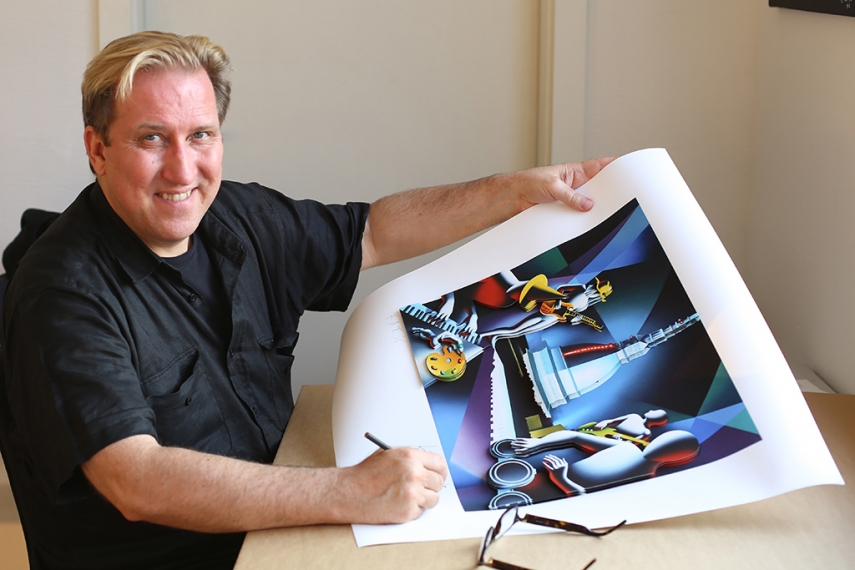 TALLINN – A gallery displaying works by Kalev Mark Kostabi, the world-famous artist of Estonian descent, will open in Tallinn on Friday.

The gallery will be opened with a concert show featuring Kalev Mark Kostabi as pianist and soprano Greesi Desiree Langovits as singer.

The artist who made it to the top of the New York art scene in the 1980s has created new works in the colors of the Estonian blue, black and white tricolor that will world premiere at Tallinn Art Space Kostabi Gallery, spokespeople for the gallery said. Visitors will be able to see more than 50 works by Kostabi in the gallery.

"Works by the author who has been dividing his time between Italy and the United States have been arriving in Estonia in recent days from both Italy and the United States, some will arrive with Kostabi himself. An unforeseen number of paintings and pieces of graphic art by Kostabi will reach the Estonian public; our biggest question today is how to accommodate all of it," Jaak Visnap, curator of the gallery, said.

"It is possible that some works will remain in the reserve for the time being, but apparently not for long, knowing the interest of Estonian friends of art in works by Kostabi," the curator added.

Artist and composer Kalev Mark Kostabi was born in Los Angeles in 1960 to a family of Estonian immigrants. The family's both sons are musicians, but unlike his brother Kalev Mark Kostabi is better known as an artist. In 1982 Kalev Mark Kostabi moved to New York and by 1984 he became a prominent figure of the East Village art scene. By 1987 his works were widely exhibited in New York galleries and prominently throughout the United States, in Japan, Germany and Australia.

Since 1996, Kalev Mark Kostabi has been dividing his time between New York and Rome.