Juris Kenins to represent the Baltic States in the global final of the Bacardi Legacy in Sydney, Australia 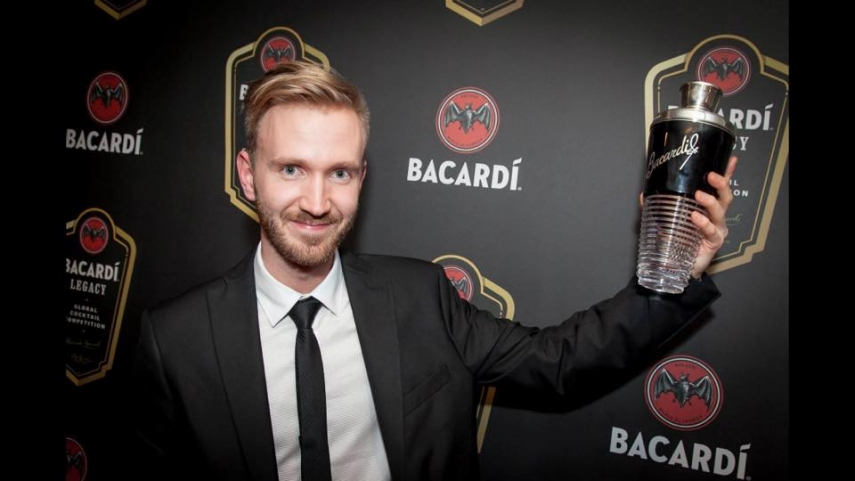 A STIRRING PERFORMANCE: Juris Kenins is a master shaker when it comes to cocktail innovations.

RIGA - Bartender Juris Kenins from Latvia who claimed the top prize with his newly created Belgian Avenue cocktail, will go on to represent the Baltic States at the global final of the Bacardi Legacy in Sydney, Australia this May.
Kenins winning cocktail recipe, a combination of Barcardi Gold, Lillet Blanc, yellow Chartreuse, pineapple juice, fleshly squeezed lemon juice, and homemade agave and chamomile syrup, was announced as the 2015 Bacardi legacy Baltic final in Tallinn, Estonia, where all together twelve  Estonian, Latvian and Lithuanian bartenders participated in the Baltic final.

One of the stipulations of the competition is that it requires bartenders to produce and present their innovative new cocktail. The unique feature of the Bacardi Legacy competition is that three months before the competition, the participants introduce their newly created cocktails to the public. Kenins supported his Belgian Avenue cocktail entry with a strong social media campaign, and attracted support from across the industry, which Kenins succeeded in  through a targeted marketing and media campaign in Latvia that was accompanied with a highly interactive social media activity, promotional campaigns at Embassy’s, and bespoke gift sets, and master classes .

“The  Baltic final of the Bacardi Legacy Cocktail Competition was  truly amazing. I was impressed with the standards from all three Baltic countries. It was definitely more than I expected. Last time I came to the Baltic’s (to Riga) three years ago.  In those three years, the level of bartenders from all of the three countries has raised. I saw that the competitors put a lot of passion in making and presenting their cocktails. It was a really tough decision to make because all of the finalists were so good. It was a really close competition. In the Bacardi Legacy competition, it is not all about making a cocktail and its presentation, it is also about the marketing aspect of it and the fact that the winner has to represent their country in the Bacardi Legacy world championships taking place in May in Australia. These were all the aspects the jury had to bear in mind. Juris Kenins from Latvia was the overall winner because his cocktail was tasty and he had a good and targeted marketing campaign. He thought carefully what his drink meant and had a well composed story behind it,” said the member of the international jury, Bacardi Brand Ambassador Richard Hunt.

‘’I’m truly delighted to have been chosen to represent the Baltic States in Sydney. Bartenders from the Baltic States are indeed of a world-class calibre, and we should take a lot of pride in this’’ stated Kenins, who the Baltic Times spoke with at   The Left Door Bar, in  the prestigious Art Nouveau district of Riga on posh Antonijas iela, where he is currently employed, where you can ‘’sip your cocktail in one of the bars candlelit window niches or take a seat on one of the couches in the lounge behind the bar’’ said Kenins.

Kenins will be bringing his  Belgian Avenue cocktail recipe to the global final of the Bacardi Legacy in Sydney. Kenins stated that he again plans to conduct cocktail masterclasses to introduce the public to his cocktail creation Belgian Avenue when he returns from Australia.

As to the ingredients of his Belgian Avenue cocktail. Kenins shares the recipe with the Baltic Times readers.

Sydney will also be enjoying, Kenins hopes. Nearly thirty of the worlds talented bartenders will participate in this year’s final in Australia. If Kenins wins the global final of the Bacardi Legacy in Sydney this May he will be travelling the world, promoting not only the Baltics states, and Latvia, but importantly showcasing his recipe and promoting the Belgian Avenue cocktail to gain listings and menu places in some of the world’s most respected bars.