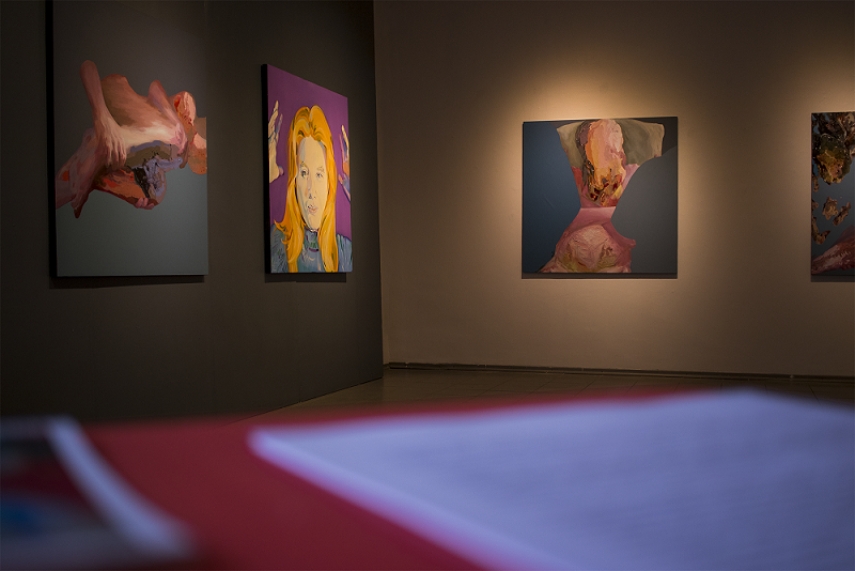 One focuses on the sound and not on the ears that hear it. They perceive the smell but not the part of their body sensing it. A person lives with an absent body, one that functions automatically in the background and often only seizes the attention at times of dysfunction.

“Dys-appearance” denotes a situation where a person becomes aware of their body and it becomes an object driven by abnormality (whether it is physical, psychological or social) and regardless of their own will. This deviation can be a daily need, a sickness or caused by someone’s disturbing gaze. As a result, the body becomes a hindrance and its presence sets limits.

Lemberg-Lvova’s hyperrealistic portraits make the physical problems of the subjects invisible. When one looks at the smile or the graceful gesture of a person, they assume that the body before them is a perfectly functioning machine that allows for a carefree and prosperous existence. Often this assumption is false and the reality is drastically different. Lemberg-Lvova was interested in what lies beneath the outer beauty and asked the models to assume poses that felt natural the last time they were in pain or ill. In doing so the paintings reflect how a malfunctioning body is not necessarily visible to an observer, nor does it distort the beauty of a human.

Jüris’ paintings examine the relationship between a patient and a caregiver, focusing on the physical contact. Physical touch has been an important aspect of healing practices in many cultures throughout history. It is through touch that a person feels their body, their presence and receives direct and immediate contact with the world. The compassionate and caring touch of a caregiver could help with a patient's healing process, whilst helping them restore the connection between them and their body, as well as between them and others. The paintings are based on the ergonomic principles for caretakers, which have been purposefully taken out of their medical context. The paintings show the ambivalence of physical touch as well as the materiality of human tissues. The portrayed touch is, on the one hand, intimate but despite its intimacy it is almost intrusive, overstepping the autonomy of the person. On the other hand, the one-sidedness of the contact makes it feel cold and calculated.

Anastasia Lemberg-Lvova is an artist working in Estonia, the Netherlands and Moscow. She received her Bachelor’s Degree in Fine Arts at the University of Tartu. Lemberg-Lvova artistic explorations focus on people and highlight the individual’s emotions, beauty, character traits. The expressive power of the pose and the reinterpretation of the colour play a key role in her work.

Siiri Jüris is an artist based in Tartu. She is a graduate of the Tartu Art School and received a bachelor’s degree and master’s degree from the University of Tartu Fine Arts department. Starting from her BA, Jüris has often come back to portrait painting, taking an interest in the possibilities of depicting the individual and the human condition, constantly questioning conventions and traditions in the portrait painting genre. Jüris’s paintings can be found in many private collections.