JCI gives young Baltic entrepreneurs a spring in their step 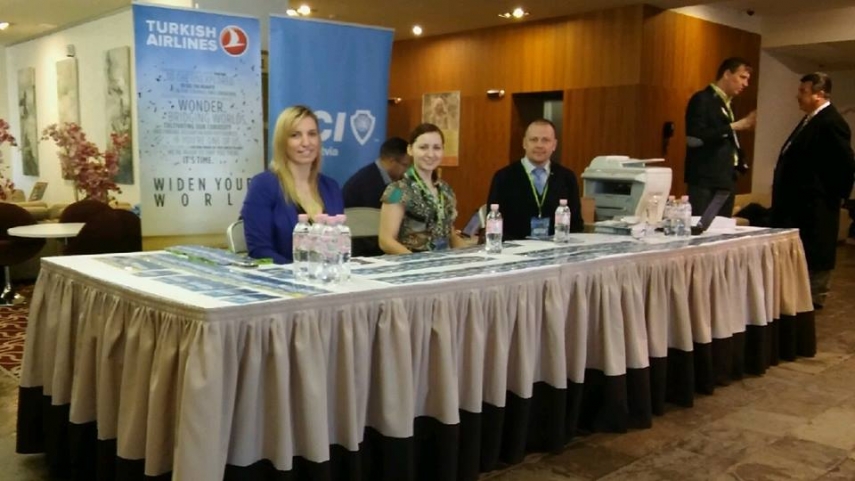 RIGA - The NGO Junior Chamber International’s Baltic Energy Conference took place in Jurmala on 11 April 2015, providing young people from Latvia, Estonia, Lithuania and further afield with a lively environment in which to develop their entrepreneurial skills through self-reflection, skills acquisition and networking. It allowed them to do so in an international context; 174 people from 14 countries attended the event, which featured seven trainers and focused on energising lives.
Relatively speaking, JCI is a little-known organisation, but what an impressive pedigree — several US presidents are among its former members. However, its importance to the Baltic States is clear: with 18 per cent of people aged 15-24 unemployed in Latvia, it’s an organization that can have a crucial impact in Latvia, as it provides training which addresses key points mentioned by the European Union in an effort to kick start youth employment.

“The main idea,” explains Jonathan Borg, Vice President JCI World, Baltic States, “is to bring the Baltic States, and their diverse communities together, to better understand each other and foster greater cooperation. I want members to be much more motivated in their own lives, but to spare a thought for the greater national and international communities.’’
Janis Murmanis, JCI President Latvia 2015, keen to showcase the entrepreneurial electricity of the Baltic States and, echoing Borg’s words, was looking for young delegates to come away with sustainable business ideas which involve communities.

In his opening speech, he reinforced the Baltic States’ dedication to self-advancement through education. Presenting in English, he made many references to the energy of the conference and how it was tailored to attract the attention and motivate young entrepreneurs.

Dr. Janis Ulmanis, leading the first English-language session, said that social media provided a wonderful opportunity to promote both individuals and brands. He gave concrete examples of how to optimize the use of Twitter, LinkedIn and Facebook, backed with international rankings which showed that his advice gets results.
His no-nonsense view on sustainable business was to get started. Having done so and been successful, it’s then possible to push success back into the community; volunteering is an essential element of society.
Rotislav Pavlov from Riga absorbed his message. With experience of some social media marketing, he appreciated the extra pointers that this keynote speaker brought.

Does sustainability negatively impact profit? Johanna Lundan from Finland, made a very clear point: that sustainability adds to profit. Janis Palkavnieks from Draugiems took humanity, and how it can be used to gain profit, as his theme. He noted that the population of Latvia is declining as young people seek better positions elsewhere but added that by embracing new styles of leadership the country could offer quality employment and a high standard of living for young people.

The final English training session was led by RISEBA’s Vladimir Ivanov.  The delegates would understand and use his ‘Agile scrum’ methods and come together in 45 minutes as a team to produce a book. He succeeded and Ieva Lukina, the General Secretary, JCI Latvia, was stunned when in her hand and surrounded by people from three countries speaking four languages, she held the promised publication.

Margaretha Eriksson, a Senator from Sweden working in international telecommunications was highly impressed. “I never knew I had been using some of Vladimir’s methods before. I recognised some of the techniques but with some twists I can improve and do my work better.”
“I hope that everyone will experiment with the method and do future work in a more lean and agile way,” Ivanovs said afterwards.

Lukina remarked that JCI gives young people opportunities for individual growth, contact and a platform to meet mentors, sponsors and trainers. “The Agile training application is a prime example. The training has reinforced my motivation to improve myself. JCI is the best platform for this.’’
Uniformly, delegates praised the event and JCI’s aims and methods.

Diana Berge,  said before the opening that ‘‘I want to visit as many training sessions as possible today as the speakers are excellent’’ Having been a member for only 6 months she was amazed at the value for money.
Gitis, JCI Lithuania, wanted to acquire business communication skills. He attended the China and Russia workshops, believing it was an area that was of growing interest to the Baltic States – ‘‘I have started learning Russian’’ he said.
Konstantin  Abramov,  JCI Russia, delivered an inter-personal communications training session. A Latvian aficionado, he was meeting old friends and said that whatever the language, JCI brought people together and that through communication we can make the world better and give the young an opportunity. Delivering a very evocative session he urged people to “use every second, use every minute, respect the people you meet as if every day is your last and you would go far.”
Marius, Norway, had this thought for younger people: ‘‘train your personal skills, network but remember to create a safe environment.’’

A Gala evening meal with entertainment provided by Big Al & The Jokers finished the event, it was to be introduced by Maris Krastins, just 3 years with JCI and only 21 years old. This young man standing in front of 174 delegates and hosted the night. What had JCI done for him? ‘’It has helped me to network, given me public speaking skills’’ nodding to the stage where he would present but also ‘’helped me to communicate, organise meetings, ideas, projects, help my community and helping the community helps because when you give, you get back.’’

Visibly on a mission of recruitment, he went on to mention entrepreneurship but also the quality of the young members. His message? Emulating Juris Ulmanis: ‘‘ just start!  You can meet 200,000 people from around the world and develop a great CV for life – just ask those former US presidents!’’

Then Janis Murmanis stepped up to the stage and delivered his Gala speech; referring to the opening speech, he asked delegates to build on what they had learnt today from the guest speakers, mentioning a key point each had made and then asking Virginija Pilipaviciute, JCI President Lithuania on to the stage, he said it was with pride that Latvia could pass the baton of hosting the conference to JCI Lithuania next year; Virginija was joined by Kaspar Ilves, JCI President Estonia and Jonathan Borg all of whom commented on the truly excellent conference that had been organized by JCI Latvia.